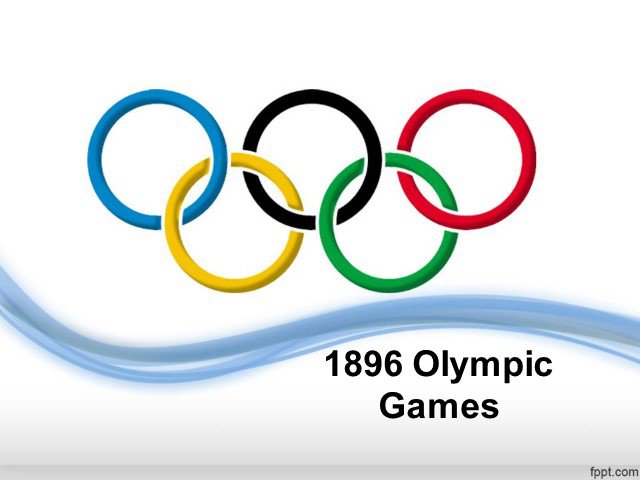 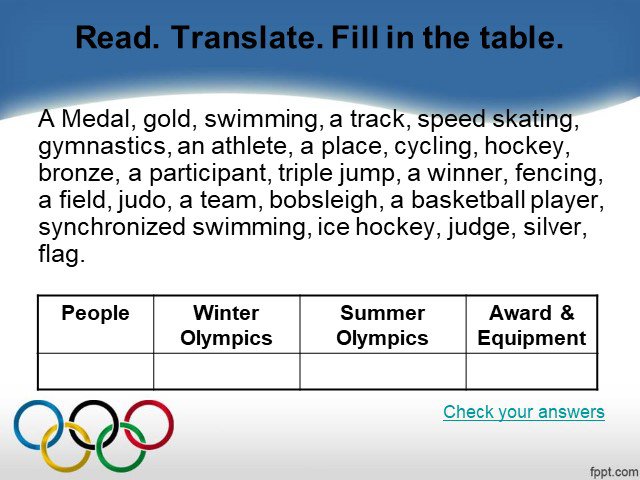 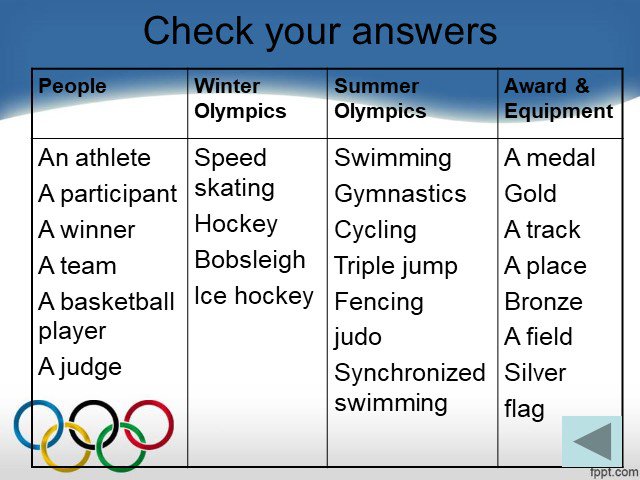 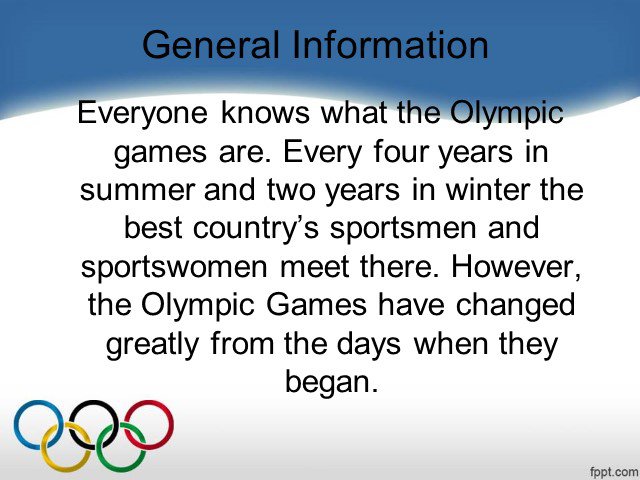 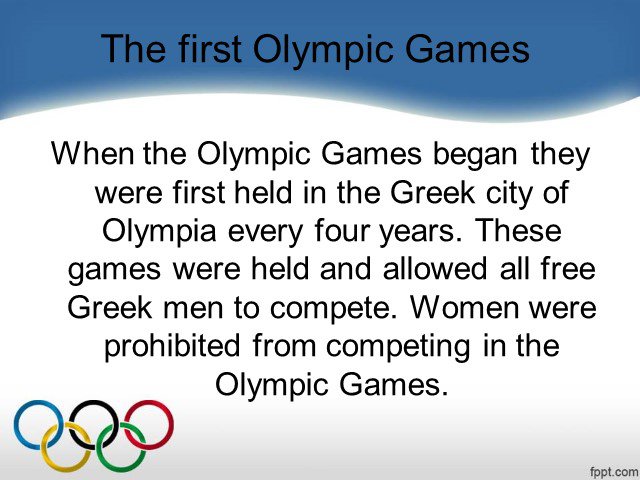 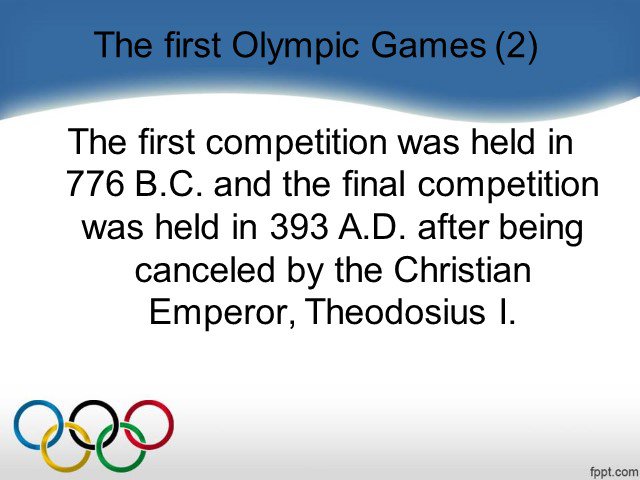 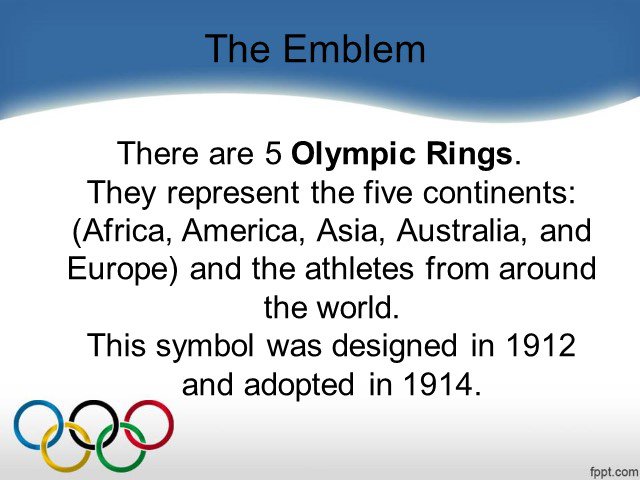 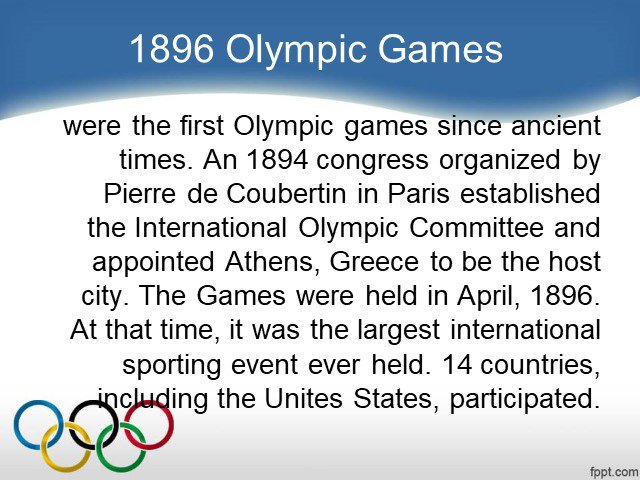 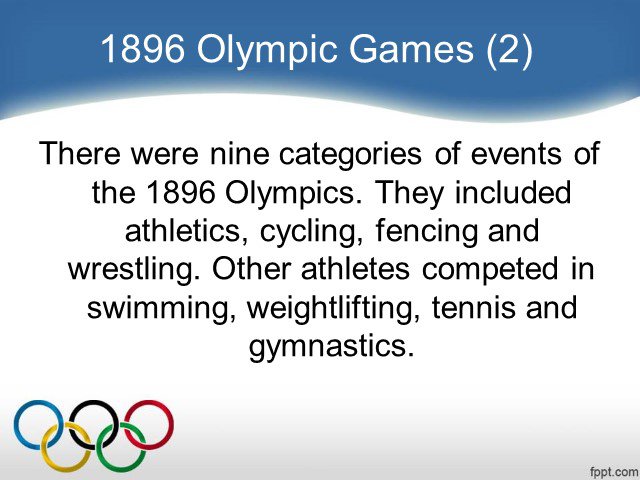 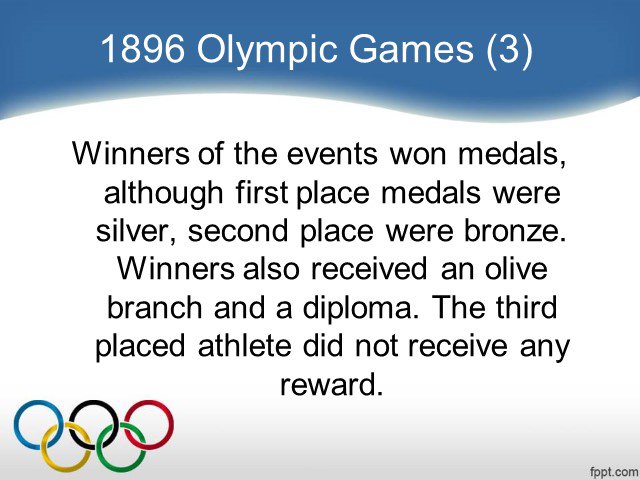 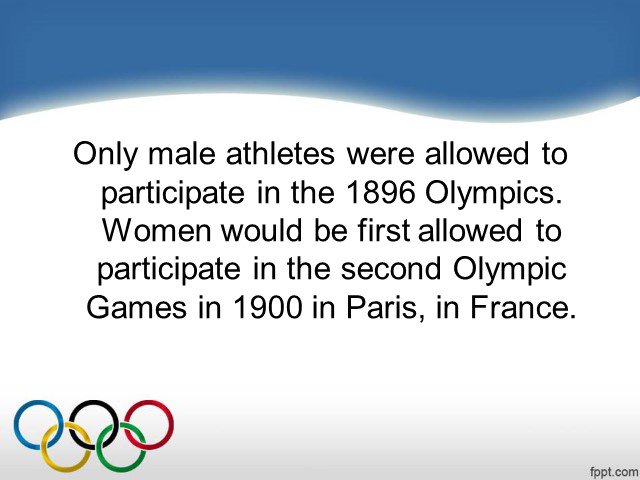 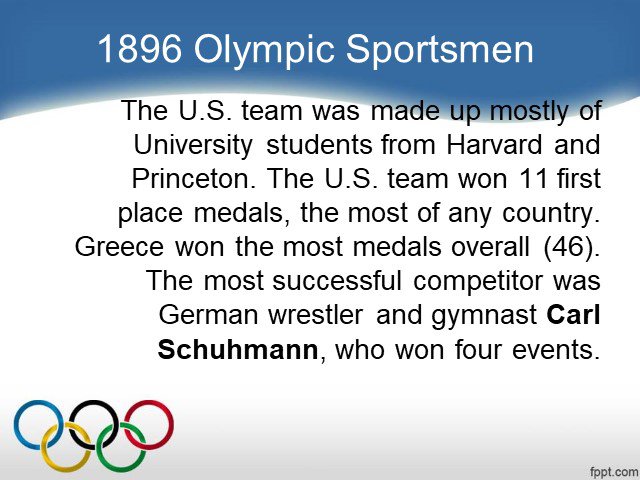 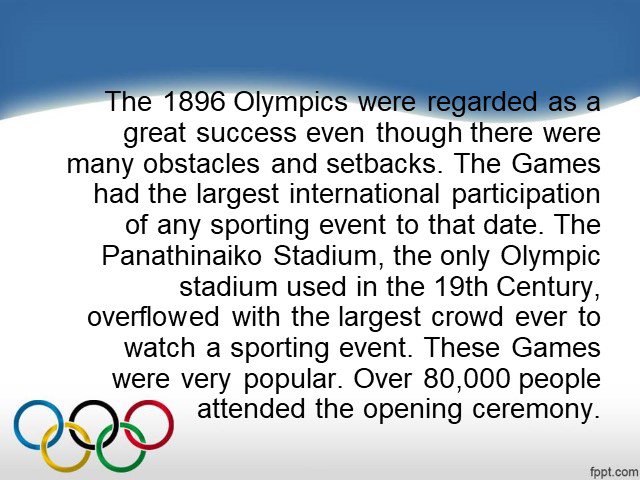 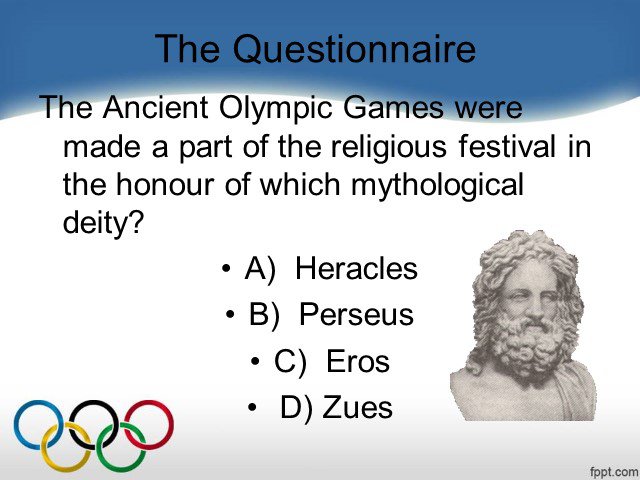 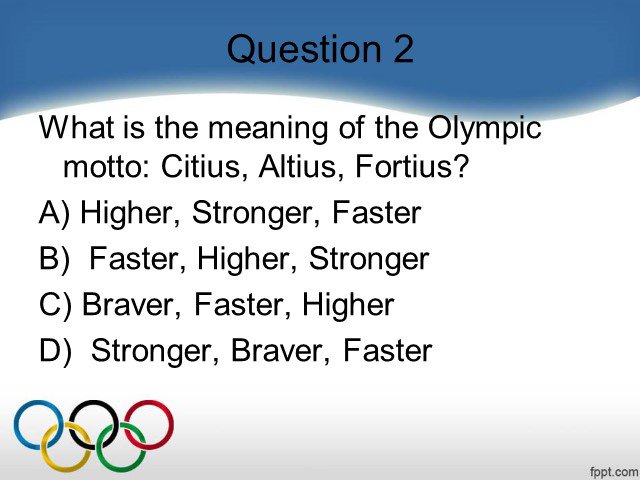 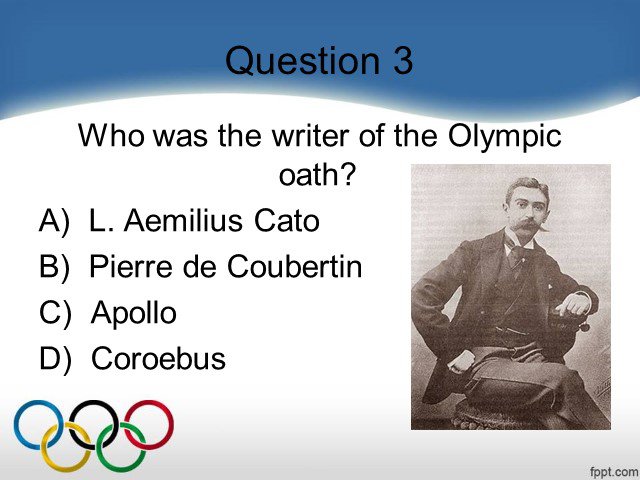 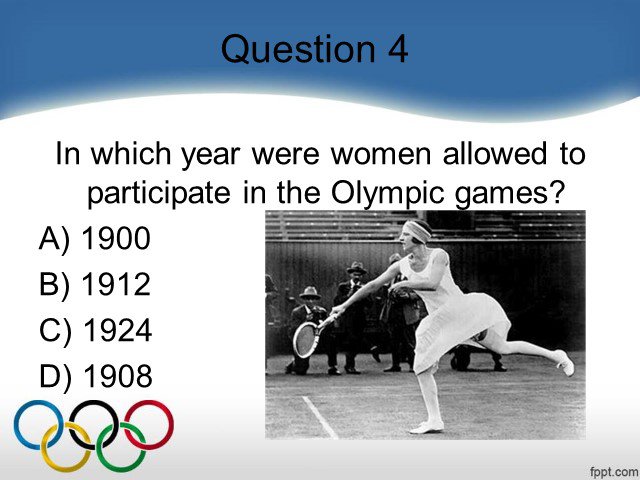 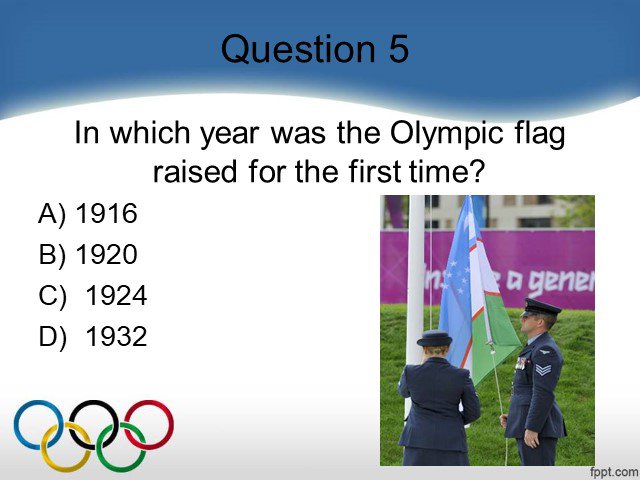 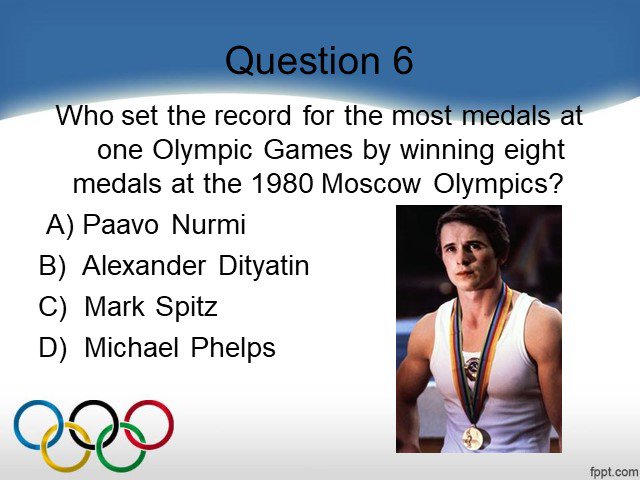 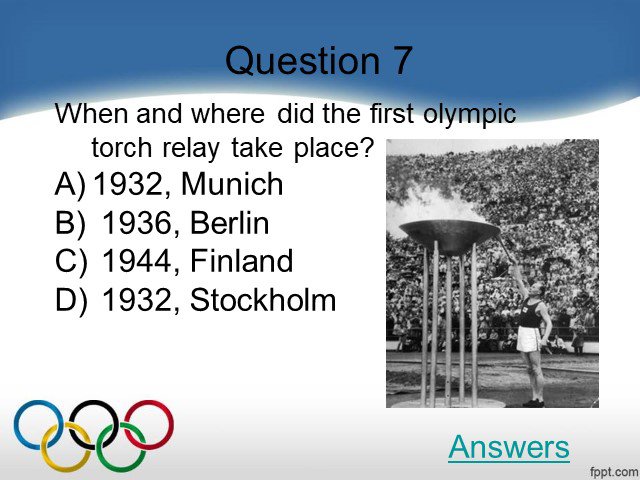 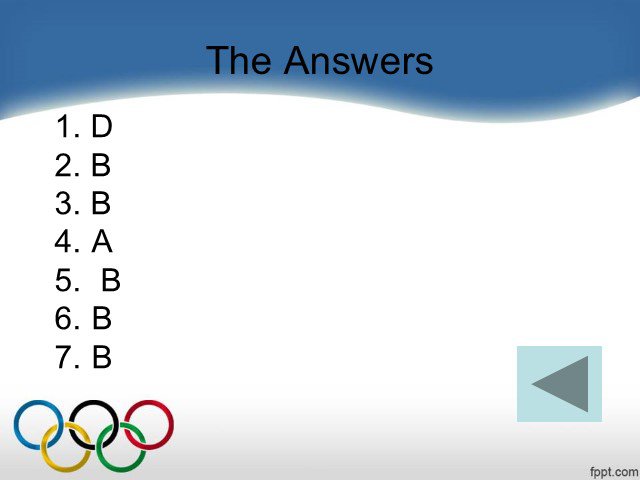 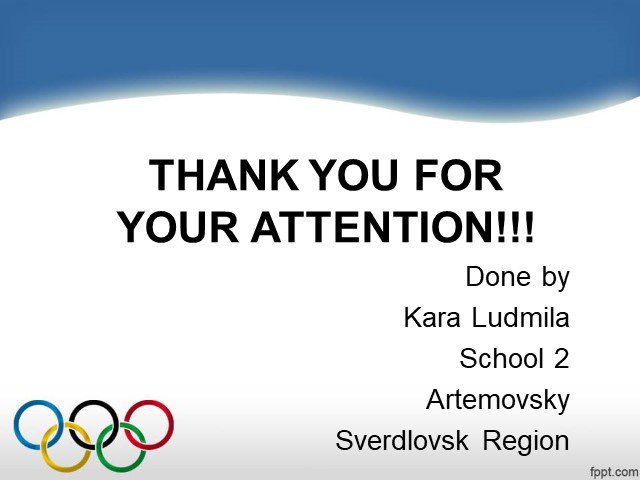 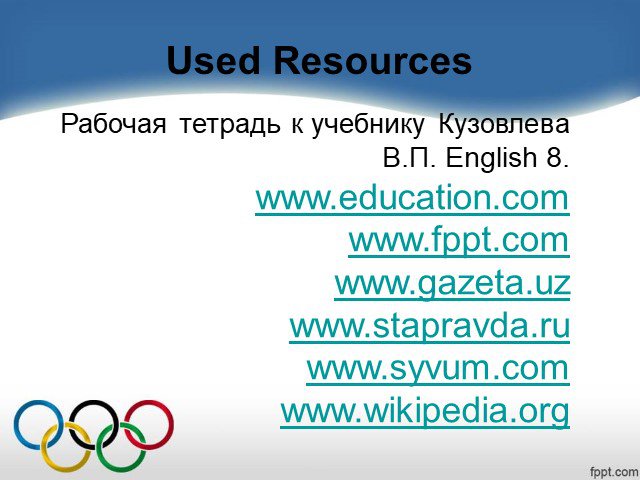 Read. Translate. Fill in the table.

Everyone knows what the Olympic games are. Every four years in summer and two years in winter the best country’s sportsmen and sportswomen meet there. However, the Olympic Games have changed greatly from the days when they began.

When the Olympic Games began they were first held in the Greek city of Olympia every four years. These games were held and allowed all free Greek men to compete. Women were prohibited from competing in the Olympic Games.

There are 5 Olympic Rings. They represent the five continents: (Africa, America, Asia, Australia, and Europe) and the athletes from around the world. This symbol was designed in 1912 and adopted in 1914.

were the first Olympic games since ancient times. An 1894 congress organized by Pierre de Coubertin in Paris established the International Olympic Committee and appointed Athens, Greece to be the host city. The Games were held in April, 1896. At that time, it was the largest international sporting event ever held. 14 countries, including the Unites States, participated.

There were nine categories of events of the 1896 Olympics. They included athletics, cycling, fencing and wrestling. Other athletes competed in swimming, weightlifting, tennis and gymnastics.

Winners of the events won medals, although first place medals were silver, second place were bronze. Winners also received an olive branch and a diploma. The third placed athlete did not receive any reward.

The U.S. team was made up mostly of University students from Harvard and Princeton. The U.S. team won 11 first place medals, the most of any country. Greece won the most medals overall (46). The most successful competitor was German wrestler and gymnast Carl Schuhmann, who won four events.

The 1896 Olympics were regarded as a great success even though there were many obstacles and setbacks. The Games had the largest international participation of any sporting event to that date. The Panathinaiko Stadium, the only Olympic stadium used in the 19th Century, overflowed with the largest crowd ever to watch a sporting event. These Games were very popular. Over 80,000 people attended the opening ceremony.

The Ancient Olympic Games were made a part of the religious festival in the honour of which mythological deity?    A) Heracles B) Perseus C)  Eros  D) Zues

Who was the writer of the Olympic oath?    A)  L. Aemilius Cato B)  Pierre de Coubertin C)  Apollo D)  Coroebus

Who set the record for the most medals at one Olympic Games by winning eight medals at the 1980 Moscow Olympics?     A) Paavo Nurmi B)  Alexander Dityatin C)  Mark Spitz D)  Michael Phelps

Alan milne and his «winnie the pooh»

Alan Alexander Milne was born in London on January 18, 1882. He was the youngest of three brothers named, David Barret Milne and Kenneth John Milne. ...

PLAN. English is a means of communication. 4. 1. 3. English is popular everywhere. English helps us in our life. Rules of learning English. Means ...

-What teenager’s problems there are now? - Today it is fashionable to speak about teenage problems. A few years ago alcohol, fights? Killings and ...

The Olympic Games in Russia. Sochi 2014

The Olympic Winter games in Sochi 2014

Sports. Town of the Olympic Champions

Olympic Games. The early Olympic Games started in 776 B.C in ancient Greece. Greek people found those games so important that they used periods ...

Sport is the way to healthy life