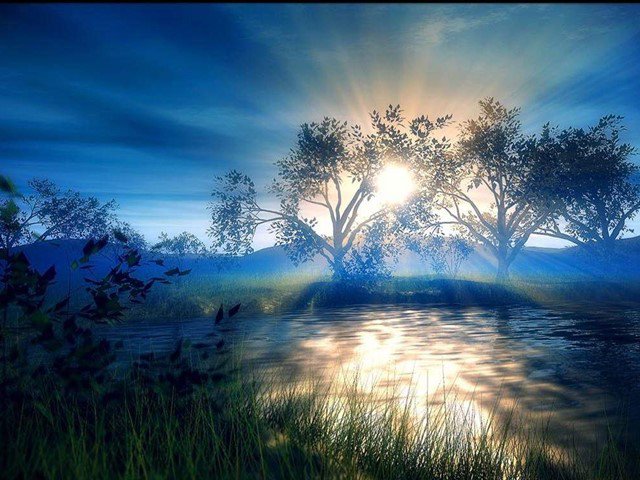 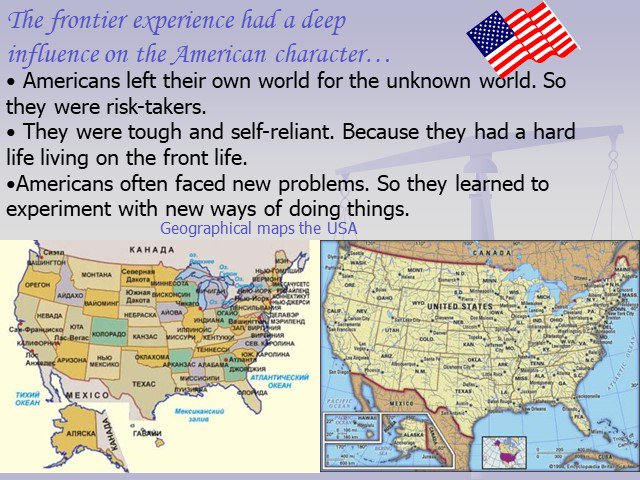 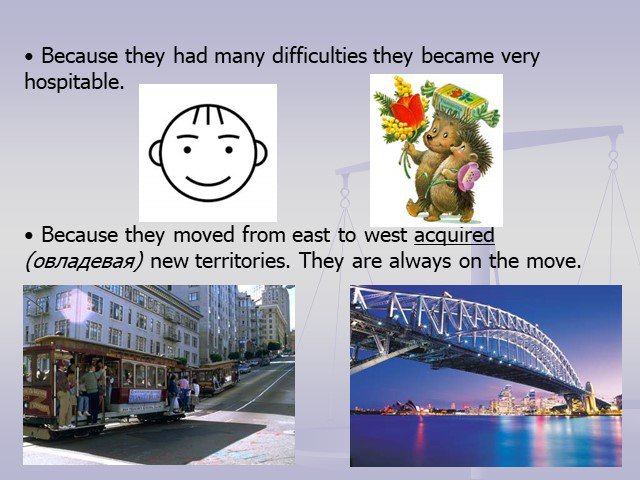 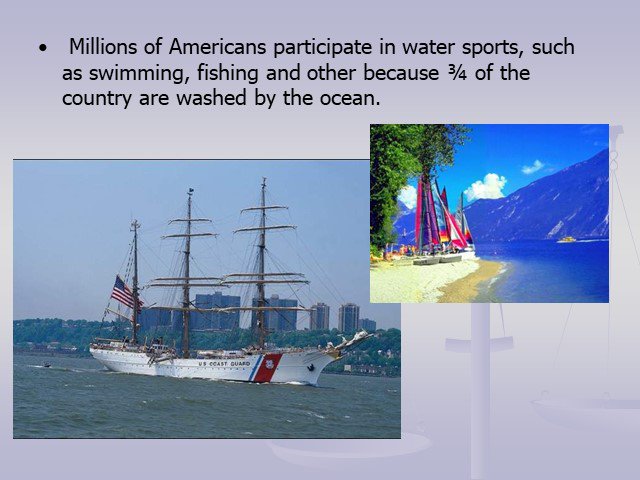 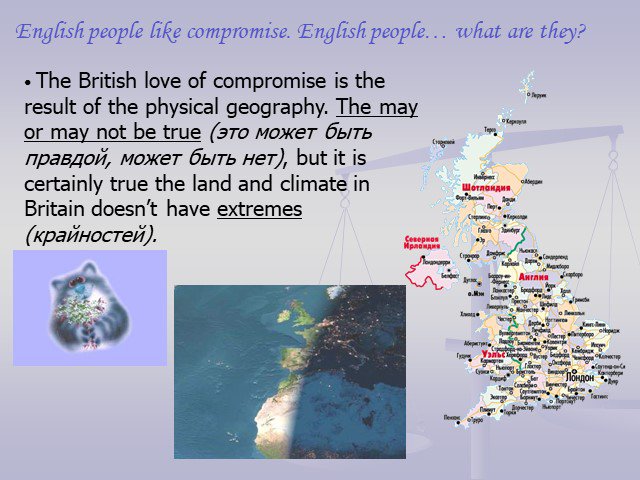 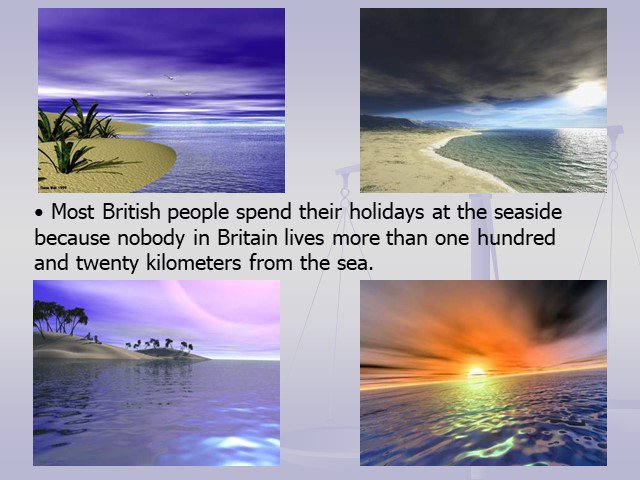 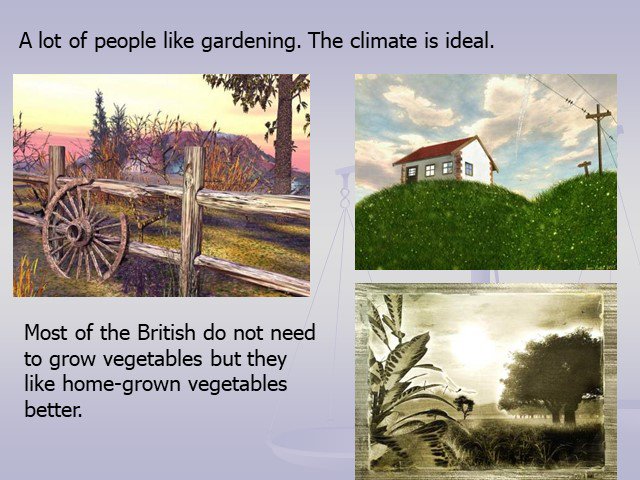 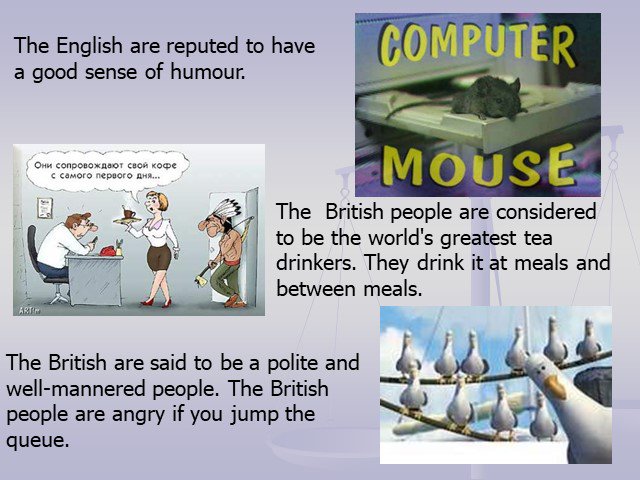 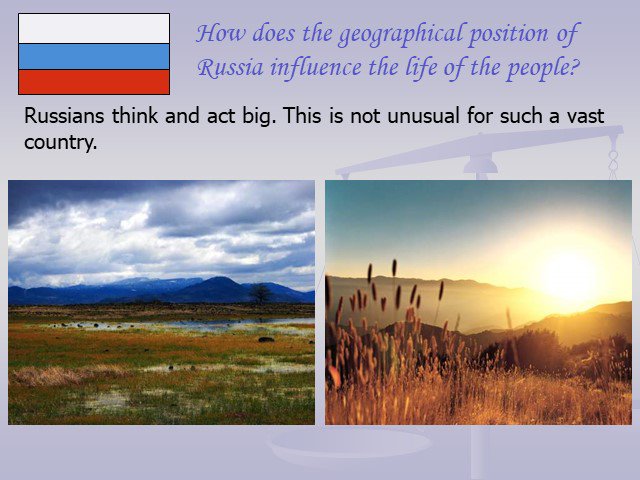 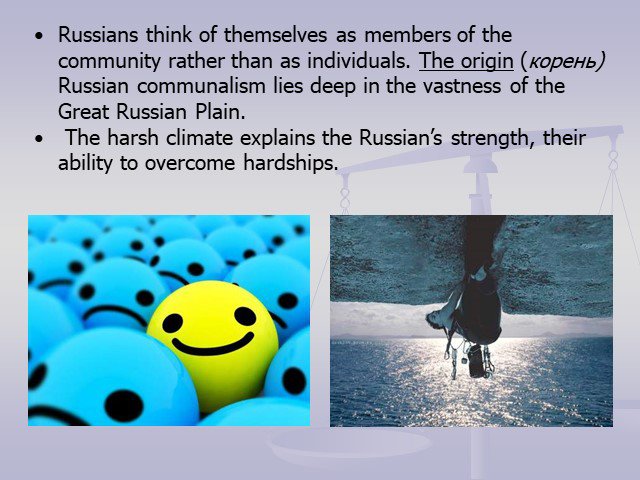 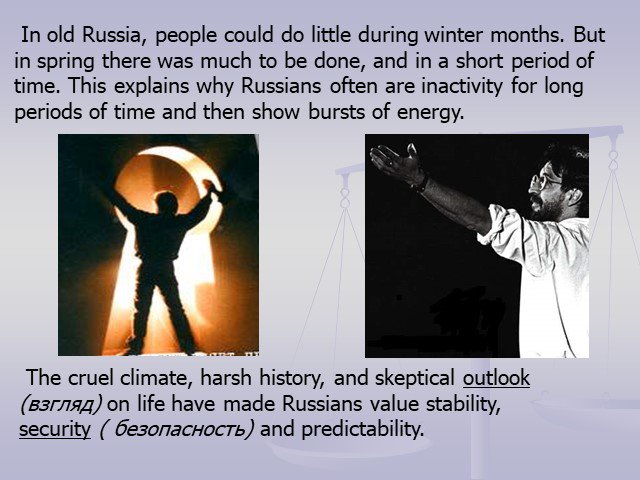 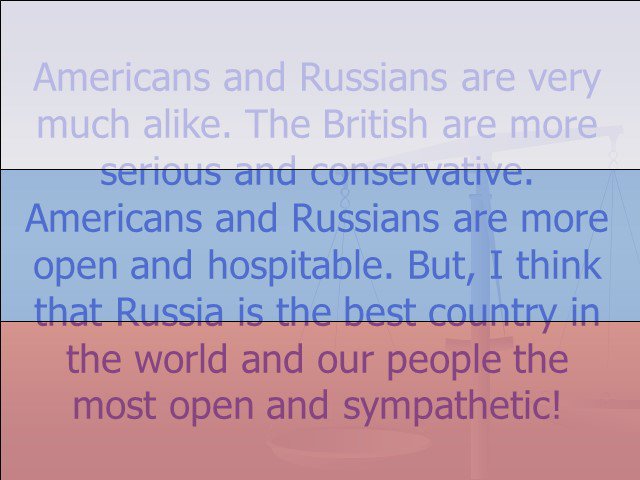 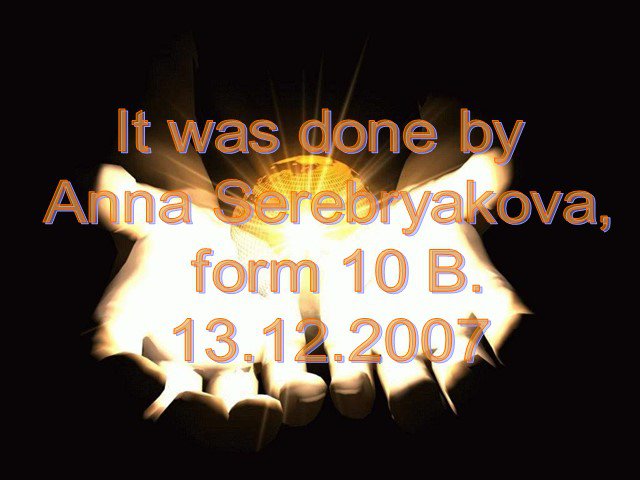 «HOW DOES THE GEOGRAPHICAL POSITION INFLUENCE THE PEOPLE’S LIVES?»

The frontier experience had a deep influence on the American character…

Americans left their own world for the unknown world. So they were risk-takers. They were tough and self-reliant. Because they had a hard life living on the front life. Americans often faced new problems. So they learned to experiment with new ways of doing things.

Because they had many difficulties they became very hospitable. Because they moved from east to west acquired (овладевая) new territories. They are always on the move.

Millions of Americans participate in water sports, such as swimming, fishing and other because ¾ of the country are washed by the ocean.

The British love of compromise is the result of the physical geography. The may or may not be true (это может быть правдой, может быть нет), but it is certainly true the land and climate in Britain doesn’t have extremes (крайностей).

Most British people spend their holidays at the seaside because nobody in Britain lives more than one hundred and twenty kilometers from the sea.

A lot of people like gardening. The climate is ideal.

Most of the British do not need to grow vegetables but they like home-grown vegetables better.

The British are said to be a polite and well-mannered people. The British people are angry if you jump the queue.

The British people are considered to be the world's greatest tea drinkers. They drink it at meals and between meals.

The English are reputed to have a good sense of humour.

How does the geographical position of Russia influence the life of the people?

Russians think and act big. This is not unusual for such a vast country.

Russians think of themselves as members of the community rather than as individuals. The origin (корень) Russian communalism lies deep in the vastness of the Great Russian Plain. The harsh climate explains the Russian’s strength, their ability to overcome hardships.

The cruel climate, harsh history, and skeptical outlook (взгляд) on life have made Russians value stability, security ( безопасность) and predictability.

In old Russia, people could do little during winter months. But in spring there was much to be done, and in a short period of time. This explains why Russians often are inactivity for long periods of time and then show bursts of energy.

The 17th Century: social tensions high unemployment declining position of the old aristocracy tensions between a despotic King and a Parliament. Charles ...

-What teenager’s problems there are now? - Today it is fashionable to speak about teenage problems. A few years ago alcohol, fights? Killings and ...

The natural environment is very important in the lives of people. In fact, it is part of their daily lives. So, it’s not difficult to imagine how ...

My sister has a bag. The bag is black. Pass me the salt, please. I watered the flowers yesterday. The употребляется с названиями рек, морей, океанов, ...

Dear friends, get acquainted with the work of the British painter William Turner, the master of the romantic landscape. You can see some of his paintings. ...

The Beatles Who are they? Some may say that they are four young long-haired hooligans singing primitive rock’n’roll tunes. The others may put them ...

In the 18th century the colonies in North America were under British rule. There were 13 of them: Virginia, Massachusetts, New Hampshire, New York, ...

The animals of our planet

Fill in the preposition of time

THE EARTH NEEDS A FRIEND, DOESN’T IT ?

How to write an address on the envelope

Comparison of the adjectives

An apple a day keeps the doctor away

Ecology around us (экология вокруг нас)