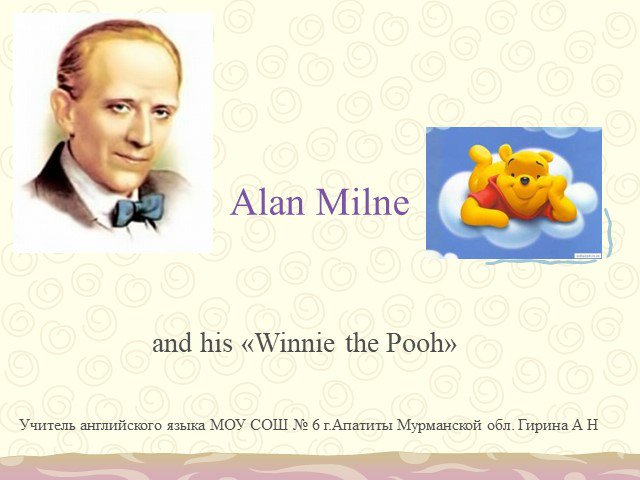 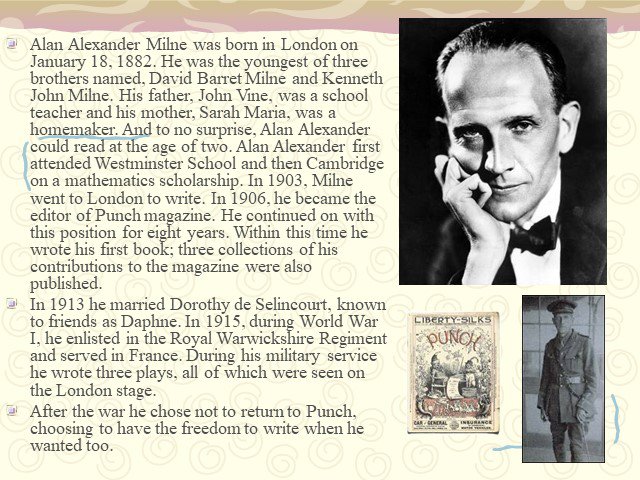 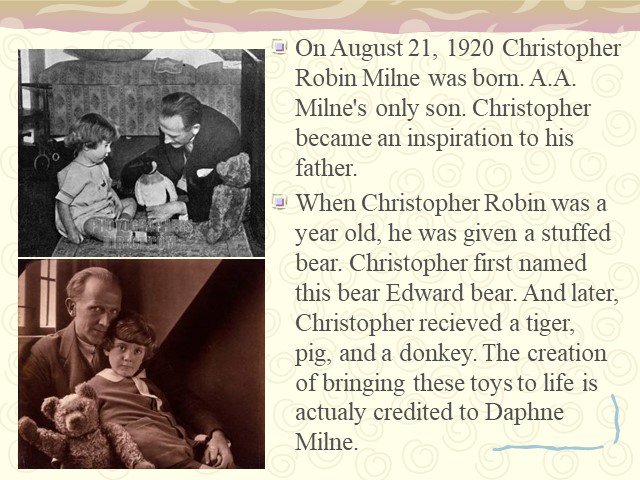 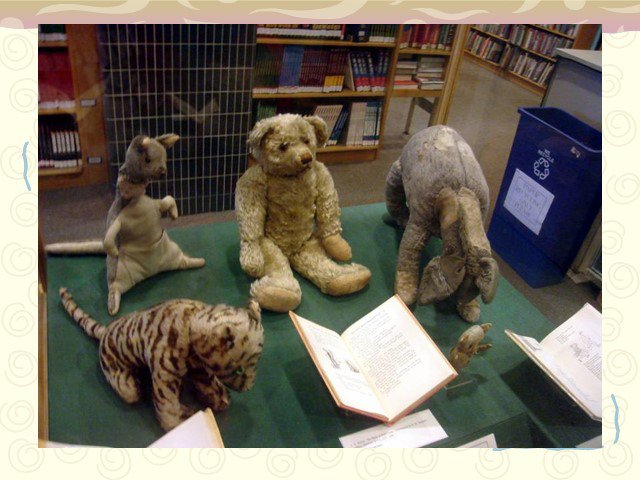 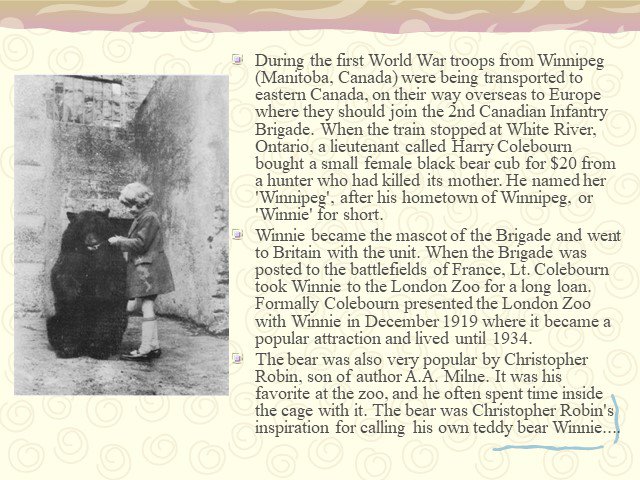 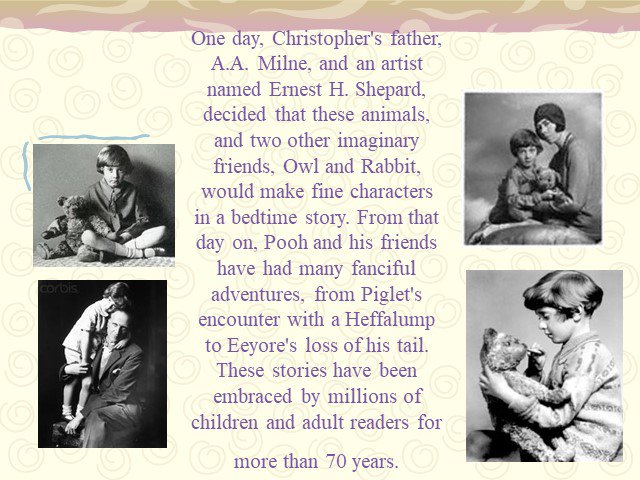 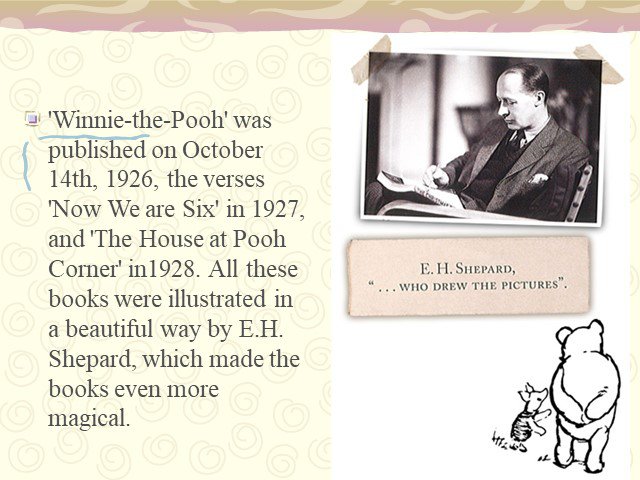 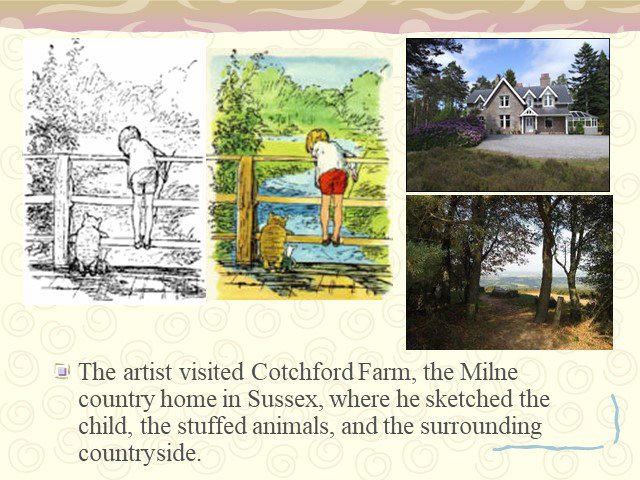 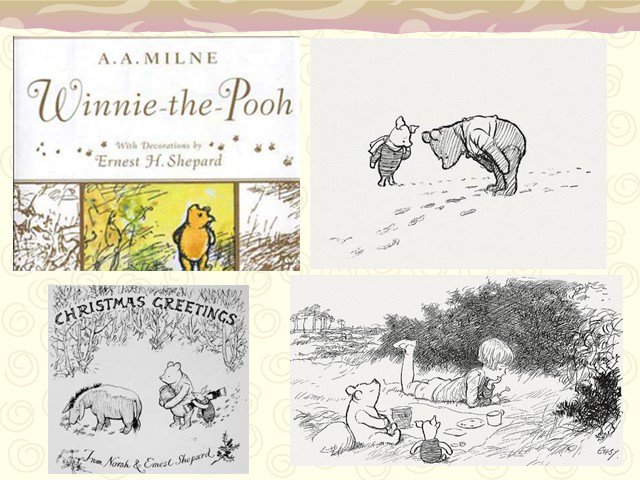 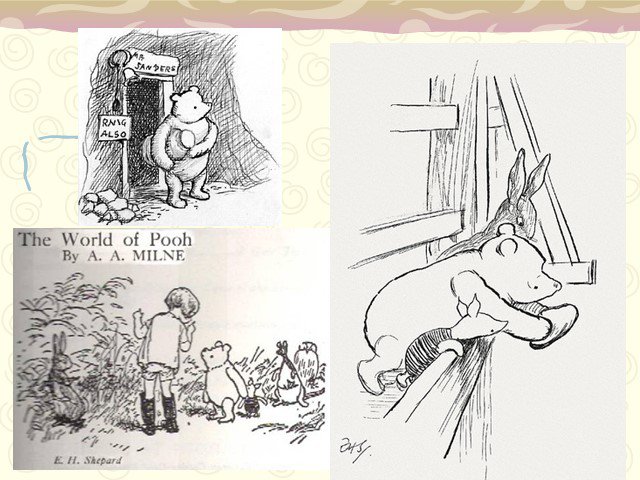 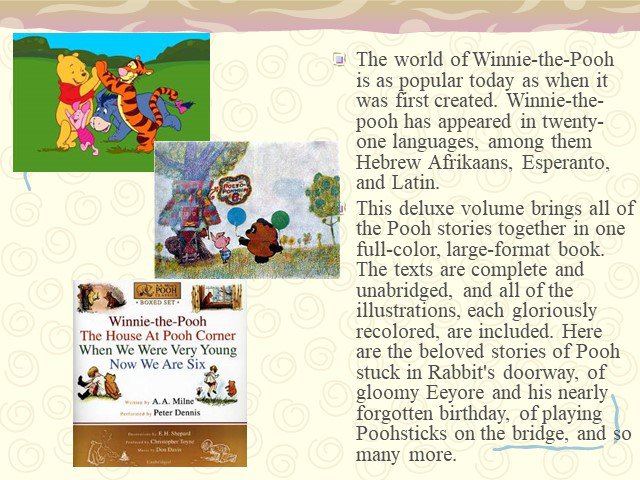 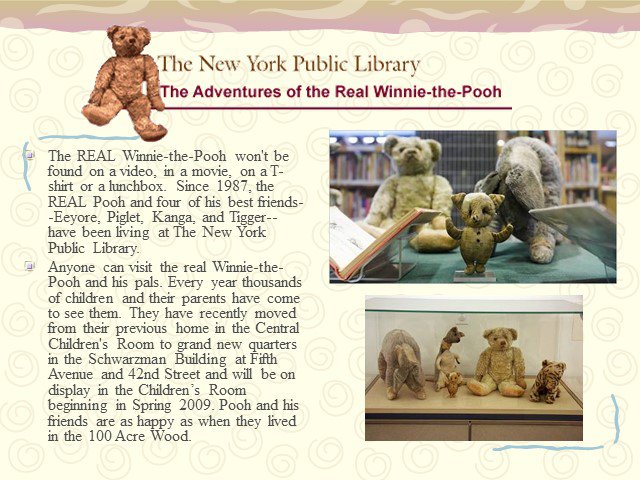 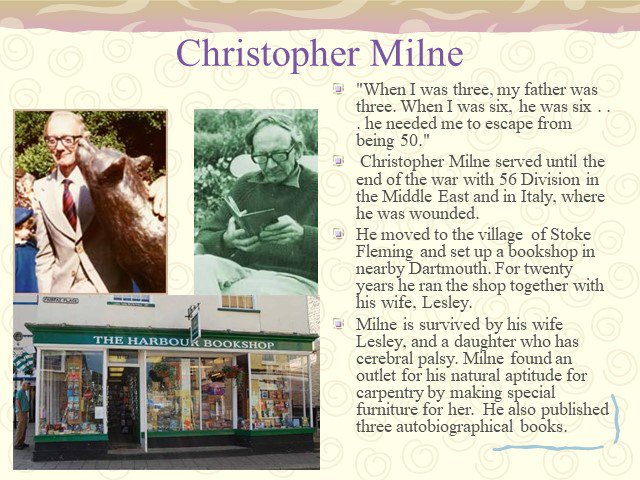 Alan Milne and his «Winnie the Pooh»

Alan Alexander Milne was born in London on January 18, 1882. He was the youngest of three brothers named, David Barret Milne and Kenneth John Milne. His father, John Vine, was a school teacher and his mother, Sarah Maria, was a homemaker. And to no surprise, Alan Alexander could read at the age of two. Alan Alexander first attended Westminster School and then Cambridge on a mathematics scholarship. In 1903, Milne went to London to write. In 1906, he became the editor of Punch magazine. He continued on with this position for eight years. Within this time he wrote his first book; three collections of his contributions to the magazine were also published. In 1913 he married Dorothy de Selincourt, known to friends as Daphne. In 1915, during World War I, he enlisted in the Royal Warwickshire Regiment and served in France. During his military service he wrote three plays, all of which were seen on the London stage. After the war he chose not to return to Punch, choosing to have the freedom to write when he wanted too.

On August 21, 1920 Christopher Robin Milne was born. A.A. Milne's only son. Christopher became an inspiration to his father. When Christopher Robin was a year old, he was given a stuffed bear. Christopher first named this bear Edward bear. And later, Christopher recieved a tiger, pig, and a donkey. The creation of bringing these toys to life is actualy credited to Daphne Milne.

During the first World War troops from Winnipeg (Manitoba, Canada) were being transported to eastern Canada, on their way overseas to Europe where they should join the 2nd Canadian Infantry Brigade. When the train stopped at White River, Ontario, a lieutenant called Harry Colebourn bought a small female black bear cub for $20 from a hunter who had killed its mother. He named her 'Winnipeg', after his hometown of Winnipeg, or 'Winnie' for short. Winnie became the mascot of the Brigade and went to Britain with the unit. When the Brigade was posted to the battlefields of France, Lt. Colebourn took Winnie to the London Zoo for a long loan. Formally Colebourn presented the London Zoo with Winnie in December 1919 where it became a popular attraction and lived until 1934. The bear was also very popular by Christopher Robin, son of author A.A. Milne. It was his favorite at the zoo, and he often spent time inside the cage with it. The bear was Christopher Robin's inspiration for calling his own teddy bear Winnie....

One day, Christopher's father, A.A. Milne, and an artist named Ernest H. Shepard, decided that these animals, and two other imaginary friends, Owl and Rabbit, would make fine characters in a bedtime story. From that day on, Pooh and his friends have had many fanciful adventures, from Piglet's encounter with a Heffalump to Eeyore's loss of his tail. These stories have been embraced by millions of children and adult readers for more than 70 years.

'Winnie-the-Pooh' was published on October 14th, 1926, the verses 'Now We are Six' in 1927, and 'The House at Pooh Corner' in1928. All these books were illustrated in a beautiful way by E.H. Shepard, which made the books even more magical.

The artist visited Cotchford Farm, the Milne country home in Sussex, where he sketched the child, the stuffed animals, and the surrounding countryside.

The world of Winnie-the-Pooh is as popular today as when it was first created. Winnie-the-pooh has appeared in twenty-one languages, among them Hebrew Afrikaans, Esperanto, and Latin. This deluxe volume brings all of the Pooh stories together in one full-color, large-format book. The texts are complete and unabridged, and all of the illustrations, each gloriously recolored, are included. Here are the beloved stories of Pooh stuck in Rabbit's doorway, of gloomy Eeyore and his nearly forgotten birthday, of playing Poohsticks on the bridge, and so many more.

The REAL Winnie-the-Pooh won't be found on a video, in a movie, on a T-shirt or a lunchbox. Since 1987, the REAL Pooh and four of his best friends--Eeyore, Piglet, Kanga, and Tigger--have been living at The New York Public Library. Anyone can visit the real Winnie-the-Pooh and his pals. Every year thousands of children and their parents have come to see them. They have recently moved from their previous home in the Central Children's Room to grand new quarters in the Schwarzman Building at Fifth Avenue and 42nd Street and will be on display in the Children’s Room beginning in Spring 2009. Pooh and his friends are as happy as when they lived in the 100 Acre Wood.

"When I was three, my father was three. When I was six, he was six . . . he needed me to escape from being 50." Christopher Milne served until the end of the war with 56 Division in the Middle East and in Italy, where he was wounded. He moved to the village of Stoke Fleming and set up a bookshop in nearby Dartmouth. For twenty years he ran the shop together with his wife, Lesley. Milne is survived by his wife Lesley, and a daughter who has cerebral palsy. Milne found an outlet for his natural aptitude for carpentry by making special furniture for her. He also published three autobiographical books.

Seasons of year and days of the week

The flag of the usa - stars and stripes

Washington D.C. and New-York are situated on the east coast of the USA. They are washed by the Atlantic Ocean. The White House. It is the place where ...

Princess diana-candle in the wind

Tt [t]. A shop assistant has got a quiet tortoise. _. Aim of the lesson: to learn how to compare pets and other animals (учимся сравнивать животных). ...

Man and the natural world

Maintenance:. Environmental problems. Dos and Don’ts. Ecology of man. My opinion. Nowadays people understand how important it is to solve the environmental ...

The 17th Century: social tensions high unemployment declining position of the old aristocracy tensions between a despotic King and a Parliament. Charles ...

What is the climate of the weather? Weather - is the state of the atmosphere in this location at a certain time or for a limited period of time (day, ...

A travelling to the Knowledgeland

Progress and development: the role of сomputers in our life

People and animals in the country and in the city

Read the text and answer the questions

New Facts from the History of London Zoo

Environmental problems and ways of their solution

Mary Poppins and the compass

To be present simple

What is there in your room?