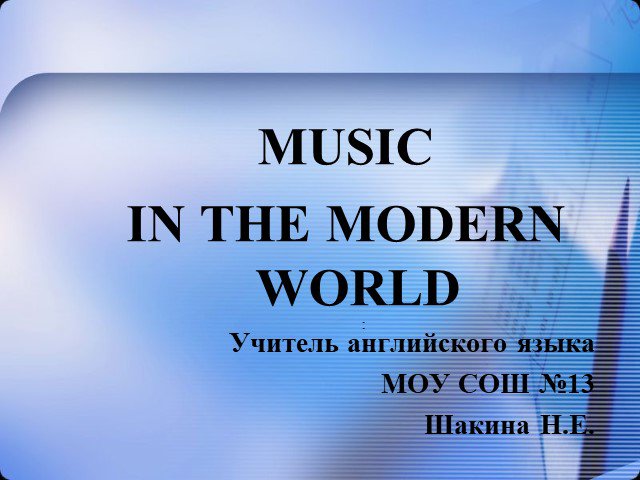 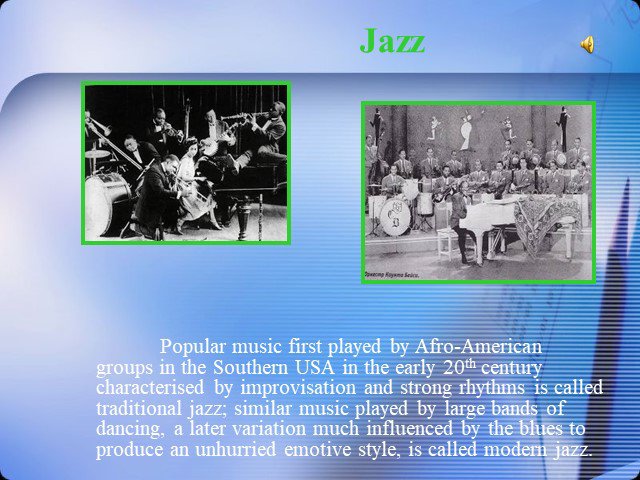 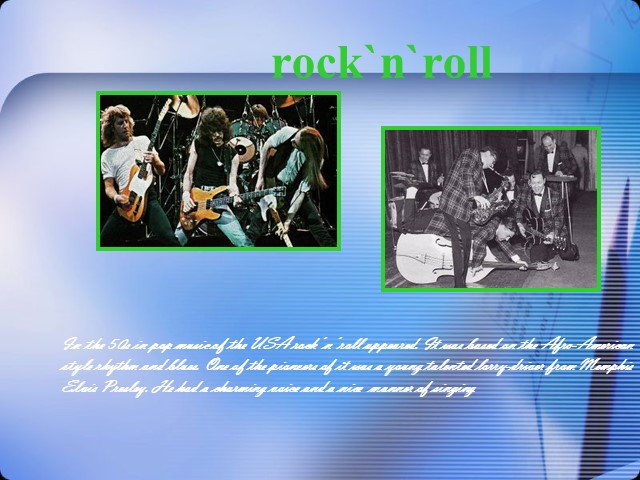 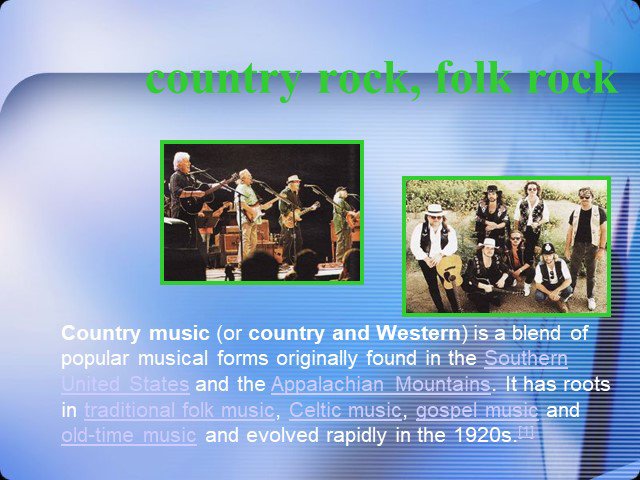 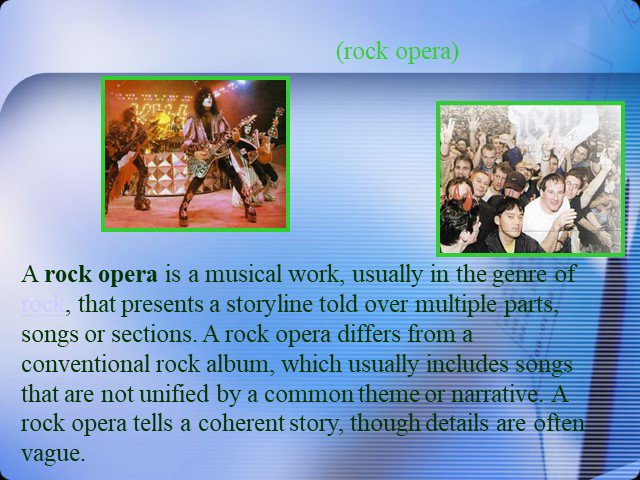 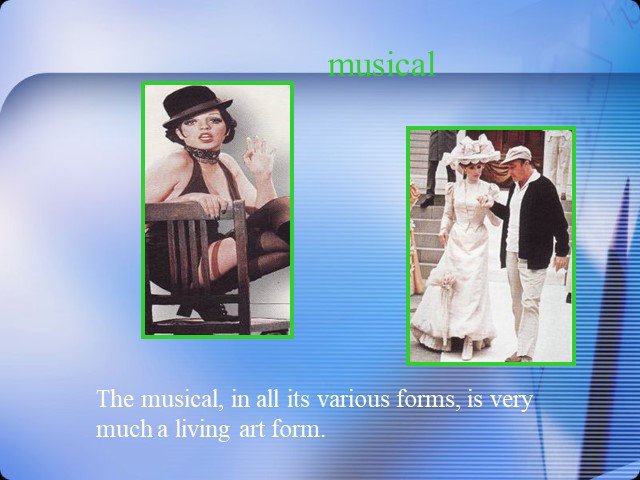 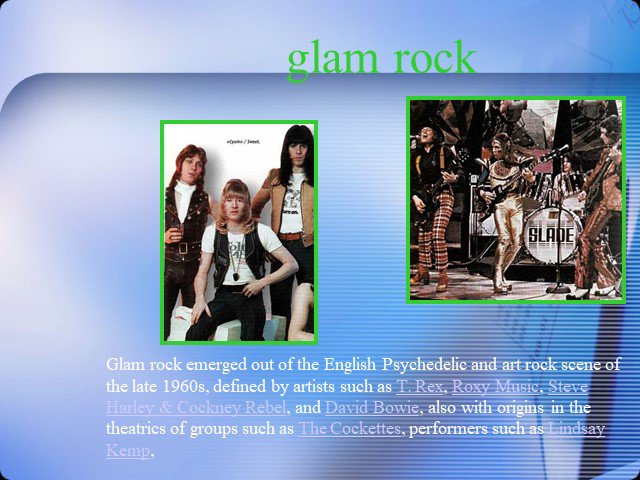 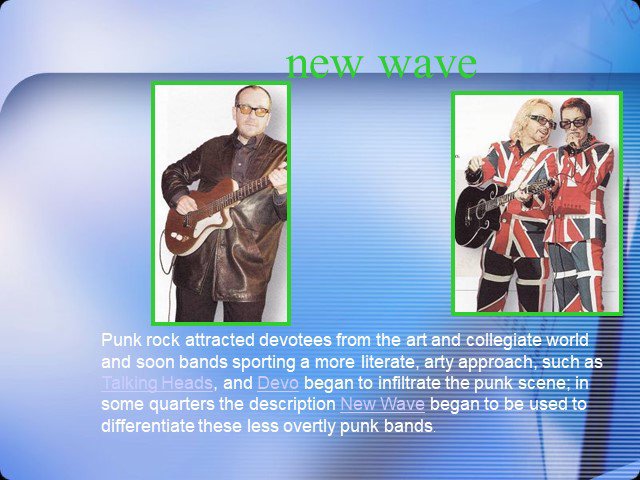 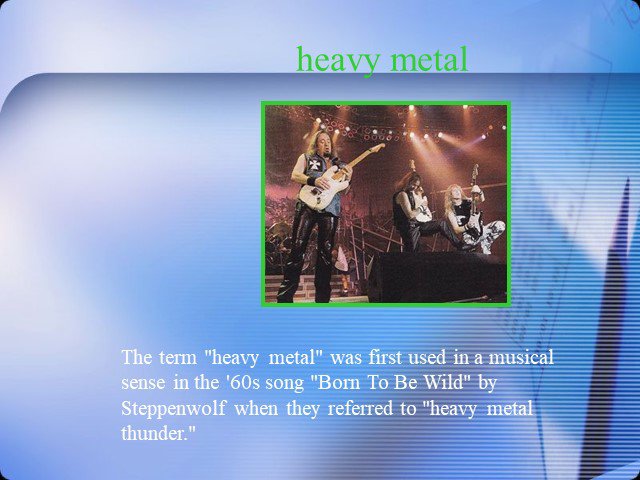 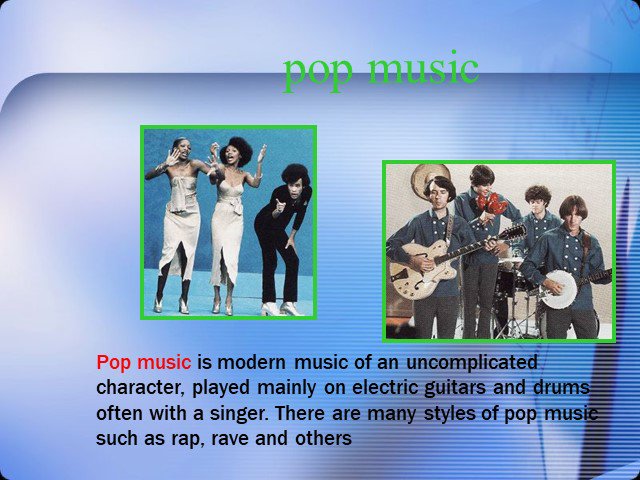 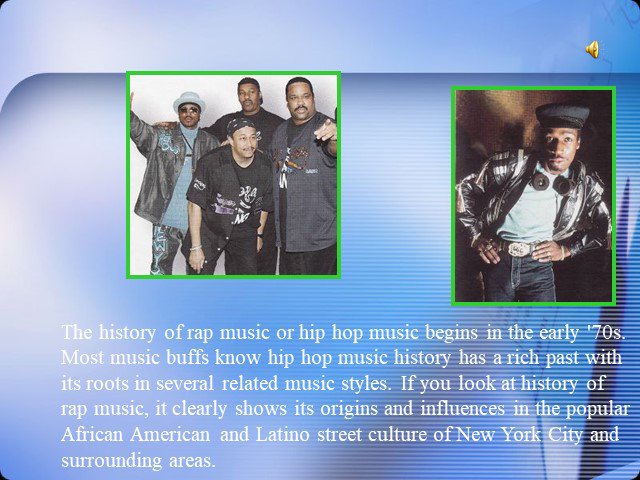 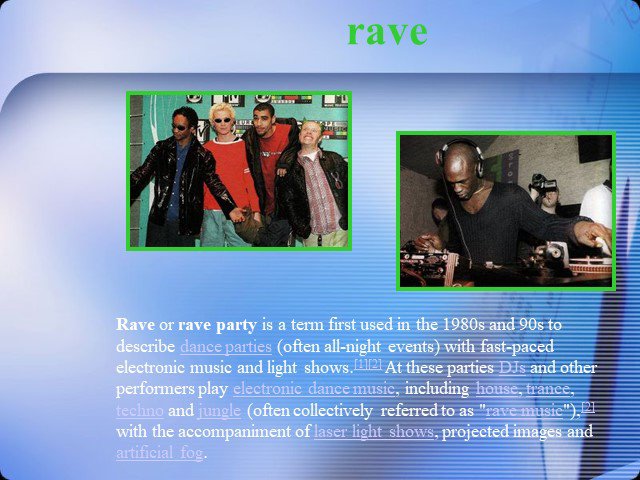 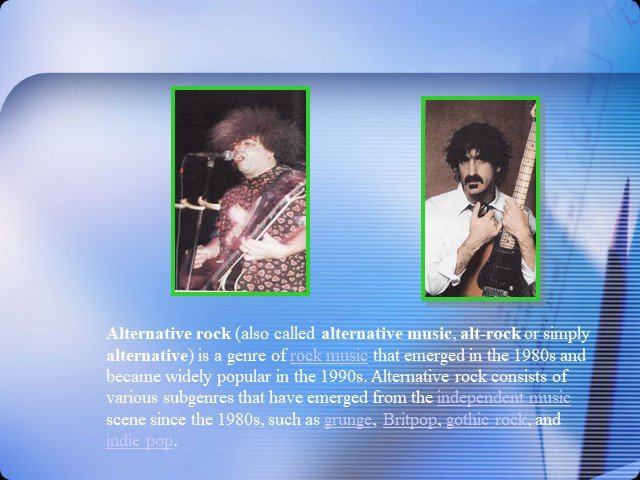 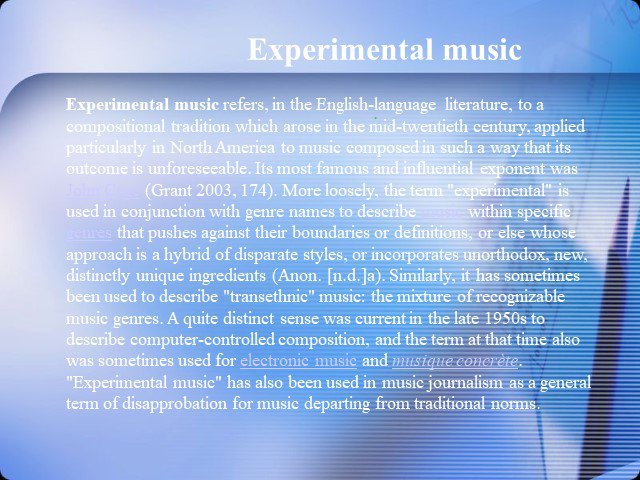 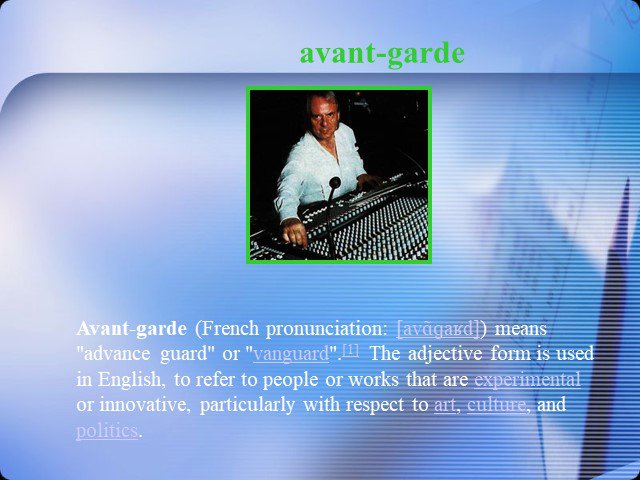 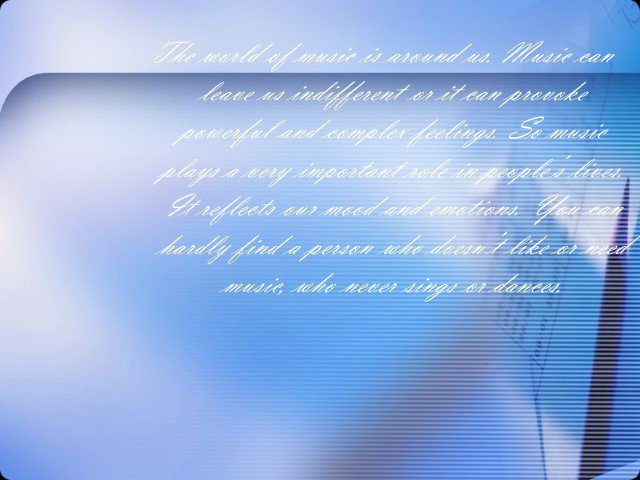 Popular music first played by Afro-American groups in the Southern USA in the early 20th century characterised by improvisation and strong rhythms is called traditional jazz; similar music played by large bands of dancing, a later variation much influenced by the blues to produce an unhurried emotive style, is called modern jazz.

In the 50s in pop music of the USA rock’ n’ roll appeared. It was based on the Afro-American style rhythm and blues. One of the pioneers of it was a young talented lorry-driver from Memphis Elvis Presley. He had a charming voice and a nice manner of singing

Country music (or country and Western) is a blend of popular musical forms originally found in the Southern United States and the Appalachian Mountains. It has roots in traditional folk music, Celtic music, gospel music and old-time music and evolved rapidly in the 1920s.[1]

A rock opera is a musical work, usually in the genre of rock, that presents a storyline told over multiple parts, songs or sections. A rock opera differs from a conventional rock album, which usually includes songs that are not unified by a common theme or narrative. A rock opera tells a coherent story, though details are often vague.

The musical, in all its various forms, is very much a living art form.

Glam rock emerged out of the English Psychedelic and art rock scene of the late 1960s, defined by artists such as T. Rex, Roxy Music, Steve Harley & Cockney Rebel, and David Bowie, also with origins in the theatrics of groups such as The Cockettes, performers such as Lindsay Kemp,

Ethnic music possesses a strong historical character.  Its music form and lyric content can be traced back to earlier forms or origins. For instance, the ethnic music of Greece uses the same music forms as Greek religious music (Byzantine chant), both based on the music forms (modes) of ancient Greece.

Punk rock attracted devotees from the art and collegiate world and soon bands sporting a more literate, arty approach, such as Talking Heads, and Devo began to infiltrate the punk scene; in some quarters the description New Wave began to be used to differentiate these less overtly punk bands.

The term "heavy metal" was first used in a musical sense in the '60s song "Born To Be Wild" by Steppenwolf when they referred to "heavy metal thunder."

Pop music is modern music of an uncomplicated character, played mainly on electric guitars and drums often with a singer. There are many styles of pop music such as rap, rave and others

Rave or rave party is a term first used in the 1980s and 90s to describe dance parties (often all-night events) with fast-paced electronic music and light shows.[1][2] At these parties DJs and other performers play electronic dance music, including house, trance, techno and jungle (often collectively referred to as "rave music"),[2] with the accompaniment of laser light shows, projected images and artificial fog.

Alternative rock (also called alternative music, alt-rock or simply alternative) is a genre of rock music that emerged in the 1980s and became widely popular in the 1990s. Alternative rock consists of various subgenres that have emerged from the independent music scene since the 1980s, such as grunge, Britpop, gothic rock, and indie pop.

Experimental music refers, in the English-language literature, to a compositional tradition which arose in the mid-twentieth century, applied particularly in North America to music composed in such a way that its outcome is unforeseeable. Its most famous and influential exponent was John Cage (Grant 2003, 174). More loosely, the term "experimental" is used in conjunction with genre names to describe music within specific genres that pushes against their boundaries or definitions, or else whose approach is a hybrid of disparate styles, or incorporates unorthodox, new, distinctly unique ingredients (Anon. [n.d.]a). Similarly, it has sometimes been used to describe "transethnic" music: the mixture of recognizable music genres. A quite distinct sense was current in the late 1950s to describe computer-controlled composition, and the term at that time also was sometimes used for electronic music and musique concrète. "Experimental music" has also been used in music journalism as a general term of disapprobation for music departing from traditional norms.

Avant-garde (French pronunciation: [avɑ̃ɡaʁd]) means "advance guard" or "vanguard".[1] The adjective form is used in English, to refer to people or works that are experimental or innovative, particularly with respect to art, culture, and politics.

The world of music is around us. Music can leave us indifferent or it can provoke powerful and complex feelings. So music plays a very important role in people’s lives. It reflects our mood and emotions. You can hardly find a person who doesn’t like or need music, who never sings or dances.

The genius of the world music

Austria, the country connected with the name of W. A. Mozart. Austria is situated in the centre of Europe. It is famous for musical life, because ...

Some of the beautiful waterfalls in the world

The world of animals

Scouting in the world

"Three keys to more abundant living: caring about others, daring for others, sharing with others." William Arthur Ward. Russia 1909 GreatBritain 1907 ...

Some of the beautiful beaches in the world

Man and the natural world

Maintenance:. Environmental problems. Dos and Don’ts. Ecology of man. My opinion. Nowadays people understand how important it is to solve the environmental ...

English as a world language

THE MUSICAL TOUR OF THE FAR EAST

Political systems of the world

It Takes Many Kinds to Make the World

In the world of animals

In the world of fantasy

In the Magic World of Fairytales

EXCURSION ACROSS THE WORLD

Symbols of the usa (символы сша)