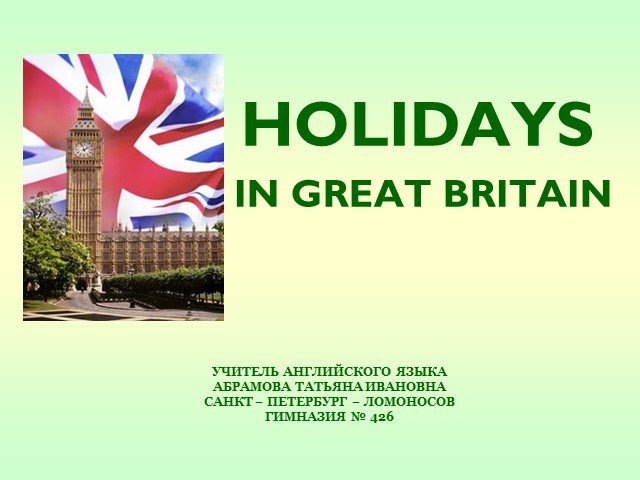 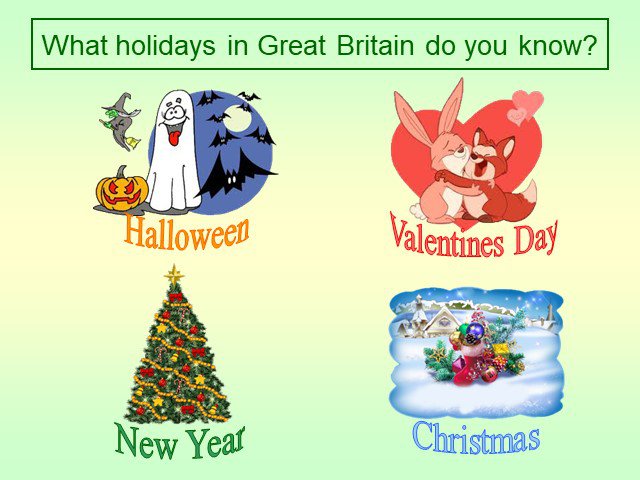 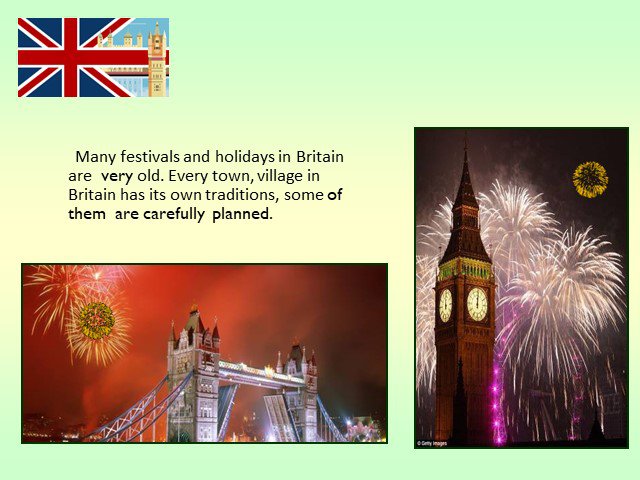 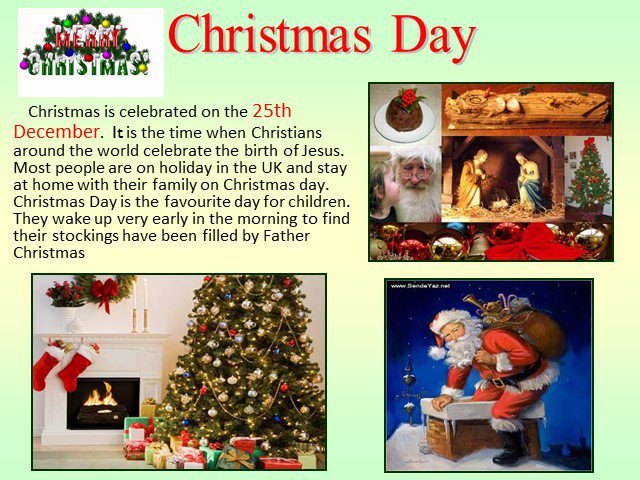 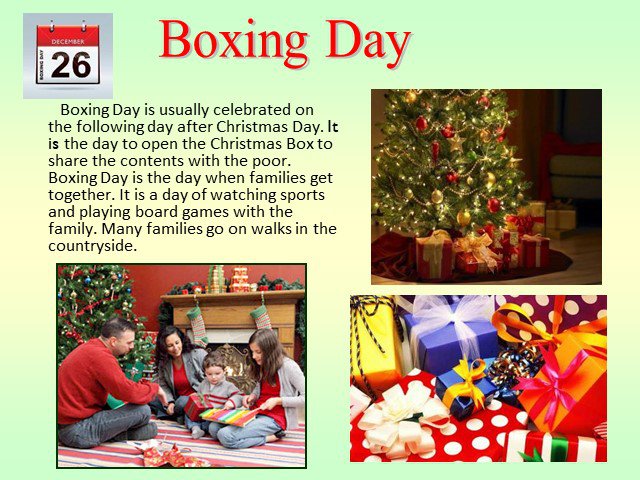 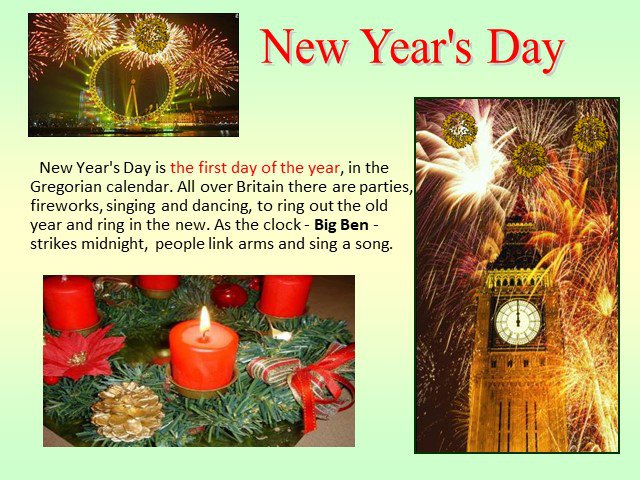 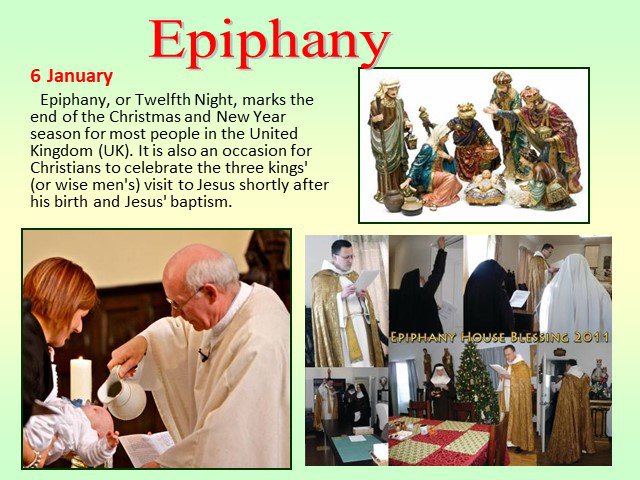 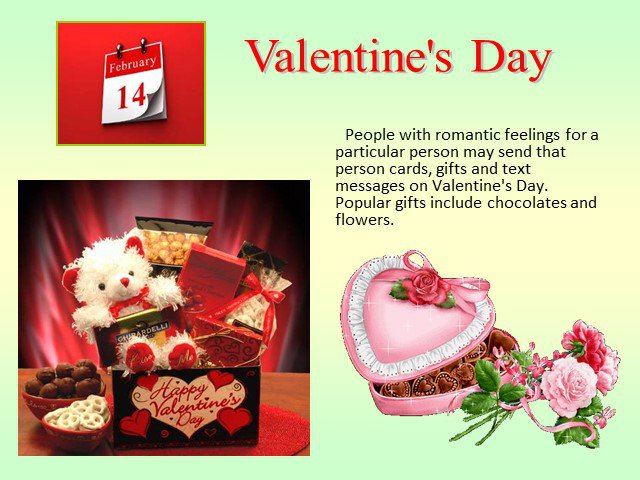 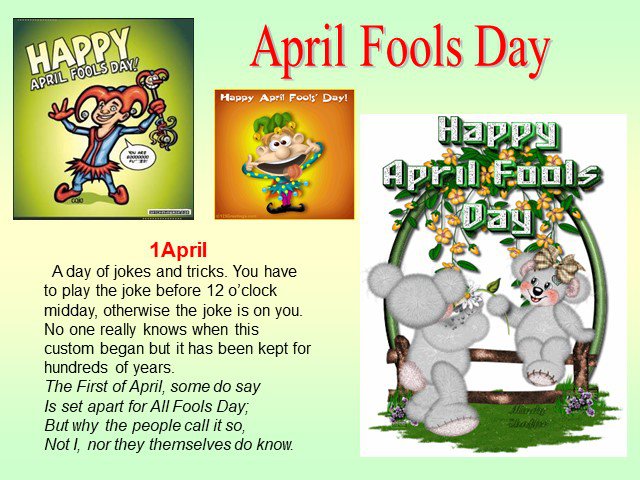 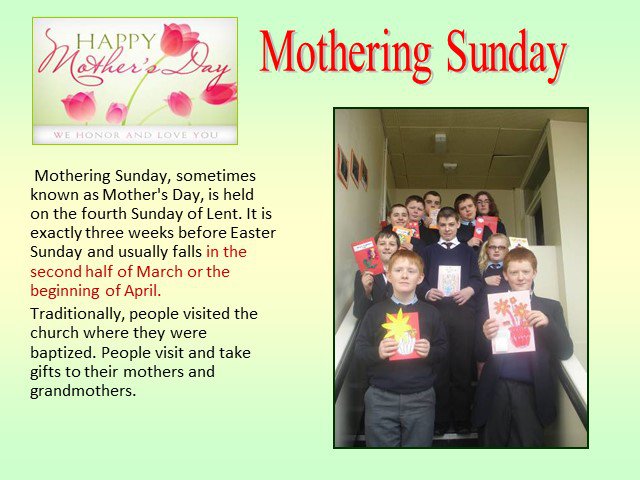 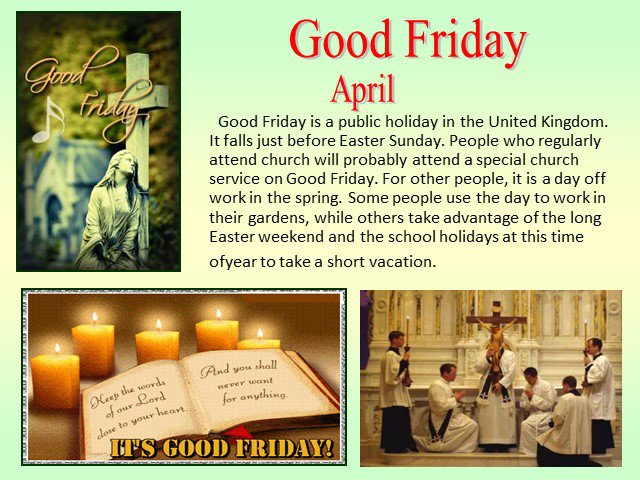 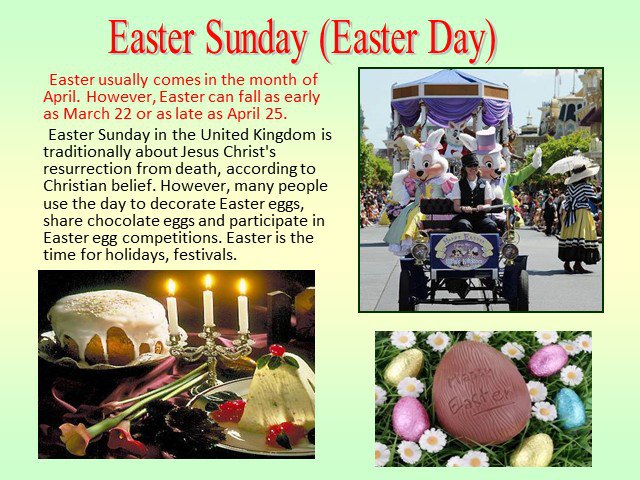 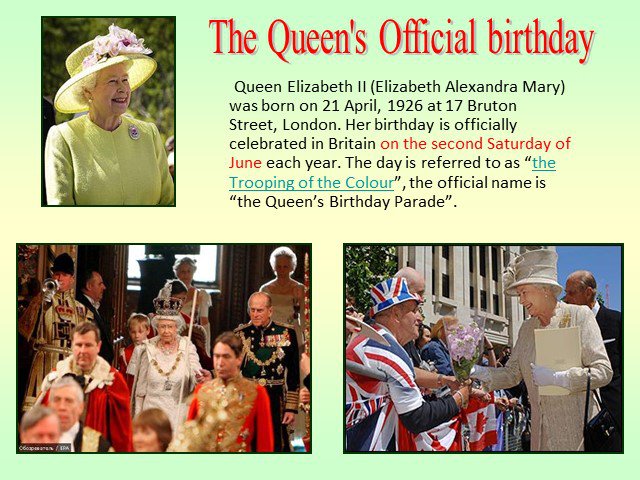 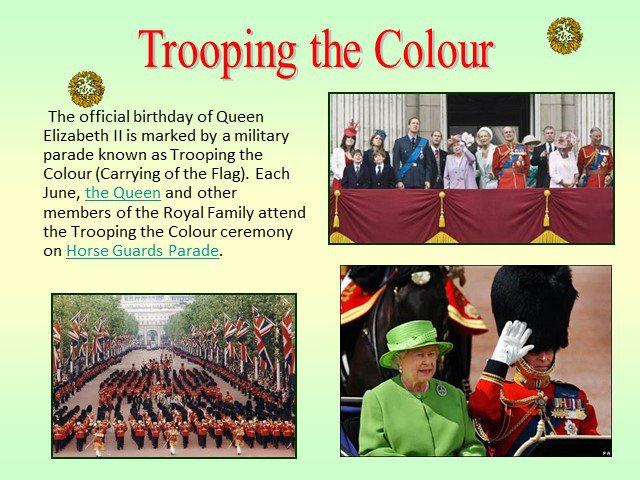 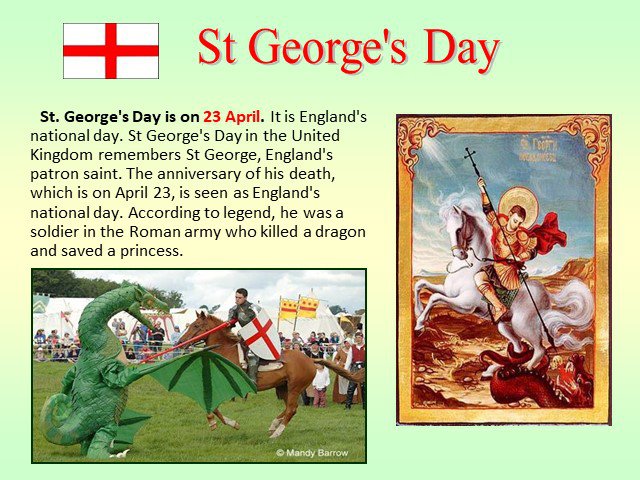 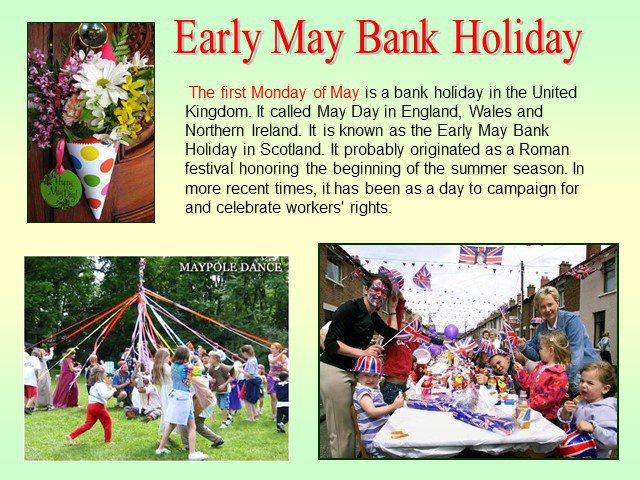 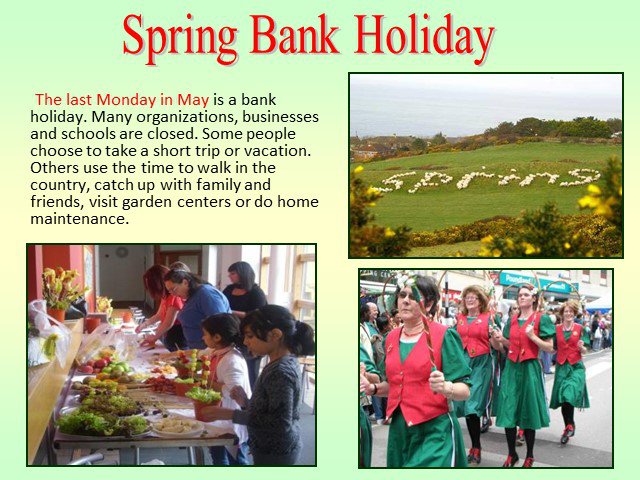 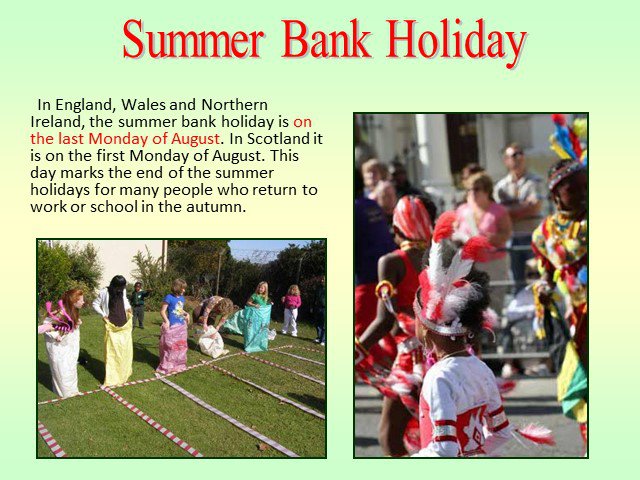 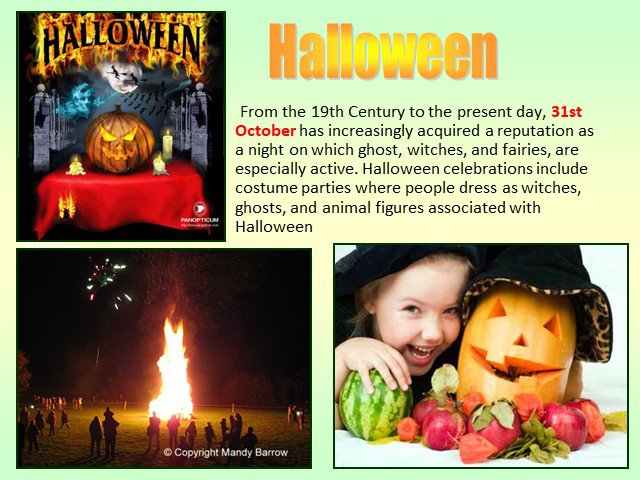 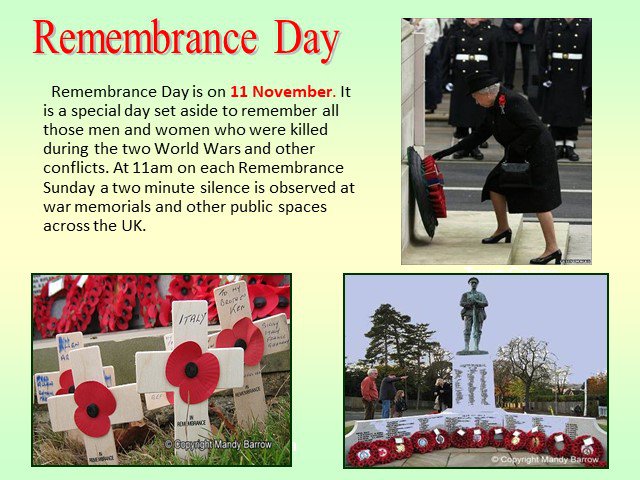 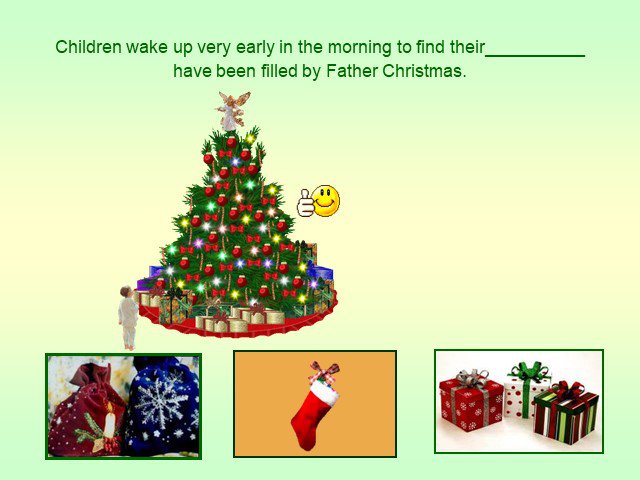 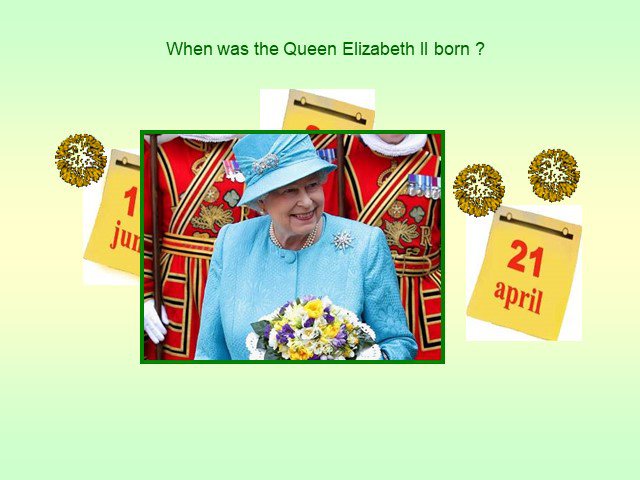 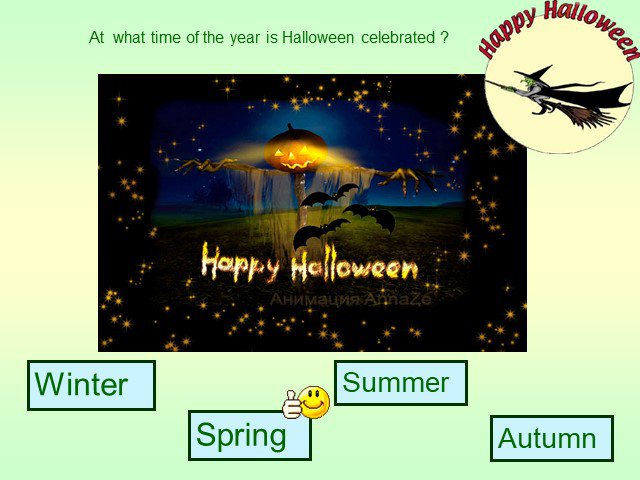 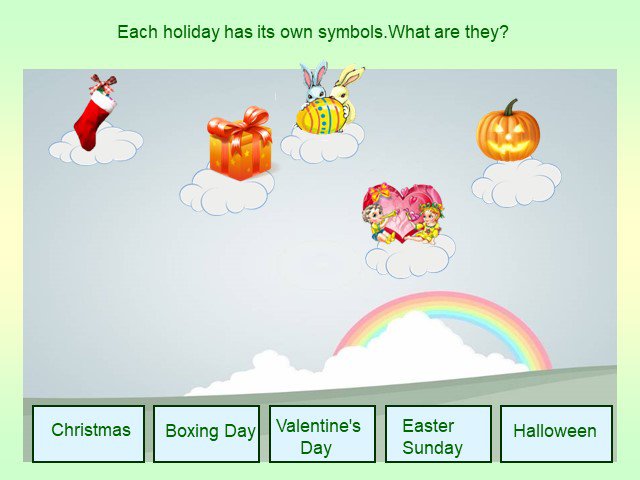 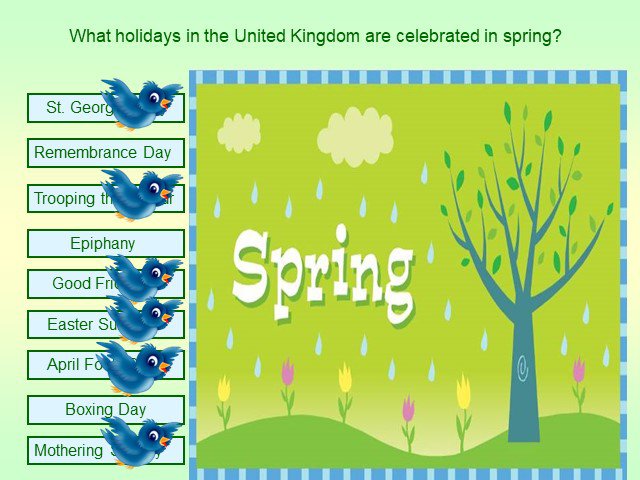 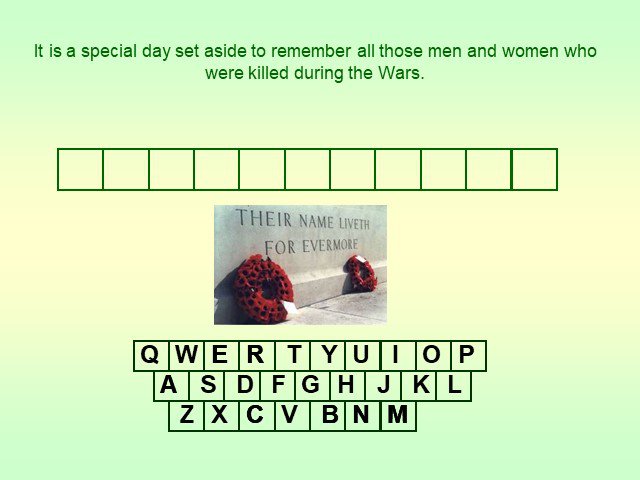 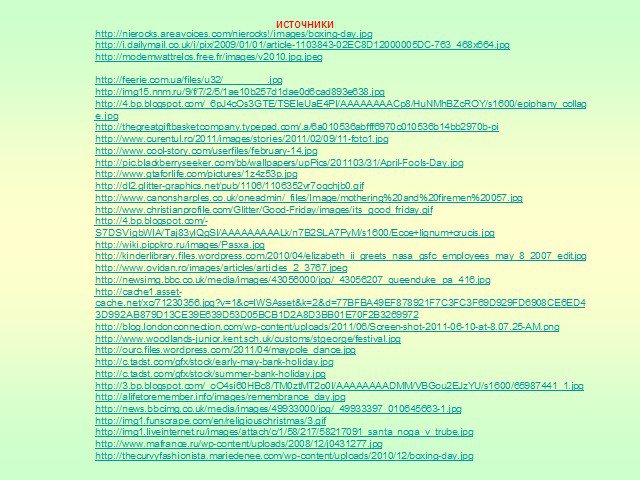 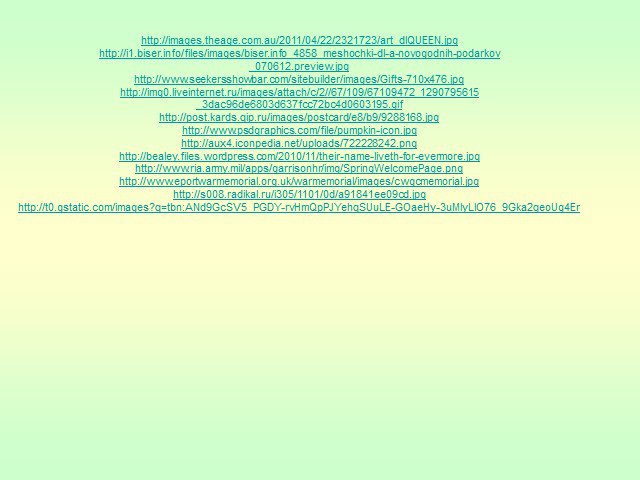 What holidays in Great Britain do you know?

Many festivals and holidays in Britain are very old. Every town, village in Britain has its own traditions, some of them are carefully planned.

Christmas is celebrated on the 25th December. It is the time when Christians around the world celebrate the birth of Jesus. Most people are on holiday in the UK and stay at home with their family on Christmas day. Christmas Day is the favourite day for children. They wake up very early in the morning to find their stockings have been filled by Father Christmas

Boxing Day is usually celebrated on the following day after Christmas Day. It is the day to open the Christmas Box to share the contents with the poor. Boxing Day is the day when families get together. It is a day of watching sports and playing board games with the family. Many families go on walks in the countryside.

New Year's Day is the first day of the year, in the Gregorian calendar. All over Britain there are parties, fireworks, singing and dancing, to ring out the old year and ring in the new. As the clock - Big Ben - strikes midnight, people link arms and sing a song.

6 January Epiphany, or Twelfth Night, marks the end of the Christmas and New Year season for most people in the United Kingdom (UK). It is also an occasion for Christians to celebrate the three kings' (or wise men's) visit to Jesus shortly after his birth and Jesus' baptism.

People with romantic feelings for a particular person may send that person cards, gifts and text messages on Valentine's Day. Popular gifts include chocolates and flowers.

1April A day of jokes and tricks. You have to play the joke before 12 o’clock midday, otherwise the joke is on you. No one really knows when this custom began but it has been kept for hundreds of years. The First of April, some do say Is set apart for All Fools Day; But why the people call it so, Not I, nor they themselves do know.

Mothering Sunday, sometimes known as Mother's Day, is held on the fourth Sunday of Lent. It is exactly three weeks before Easter Sunday and usually falls in the second half of March or the beginning of April. Traditionally, people visited the church where they were baptized. People visit and take gifts to their mothers and grandmothers.

Good Friday is a public holiday in the United Kingdom. It falls just before Easter Sunday. People who regularly attend church will probably attend a special church service on Good Friday. For other people, it is a day off work in the spring. Some people use the day to work in their gardens, while others take advantage of the long Easter weekend and the school holidays at this time ofyear to take a short vacation.

Easter usually comes in the month of April. However, Easter can fall as early as March 22 or as late as April 25. Easter Sunday in the United Kingdom is traditionally about Jesus Christ's resurrection from death, according to Christian belief. However, many people use the day to decorate Easter eggs, share chocolate eggs and participate in Easter egg competitions. Easter is the time for holidays, festivals.

Queen Elizabeth II (Elizabeth Alexandra Mary) was born on 21 April, 1926 at 17 Bruton Street, London. Her birthday is officially celebrated in Britain on the second Saturday of June each year. The day is referred to as “the Trooping of the Colour”, the official name is “the Queen’s Birthday Parade”.

The official birthday of Queen Elizabeth II is marked by a military parade known as Trooping the Colour (Carrying of the Flag). Each June, the Queen and other members of the Royal Family attend the Trooping the Colour ceremony on Horse Guards Parade.

The first Monday of May is a bank holiday in the United Kingdom. It called May Day in England, Wales and Northern Ireland. It is known as the Early May Bank Holiday in Scotland. It probably originated as a Roman festival honoring the beginning of the summer season. In more recent times, it has been as a day to campaign for and celebrate workers' rights.

The last Monday in May is a bank holiday. Many organizations, businesses and schools are closed. Some people choose to take a short trip or vacation. Others use the time to walk in the country, catch up with family and friends, visit garden centers or do home maintenance.

From the 19th Century to the present day, 31st October has increasingly acquired a reputation as a night on which ghost, witches, and fairies, are especially active. Halloween celebrations include costume parties where people dress as witches, ghosts, and animal figures associated with Halloween

Remembrance Day is on 11 November. It is a special day set aside to remember all those men and women who were killed during the two World Wars and other conflicts. At 11am on each Remembrance Sunday a two minute silence is observed at war memorials and other public spaces across the UK.

Children wake up very early in the morning to find their__________ have been filled by Father Christmas.

When was the Queen Elizabeth II born ?

At what time of the year is Halloween celebrated ?

Each holiday has its own symbols.What are they?

What holidays in the United Kingdom are celebrated in spring?

It is a special day set aside to remember all those men and women who were killed during the Wars.

Holidays and festivals in Britain

What’s wrong with us?