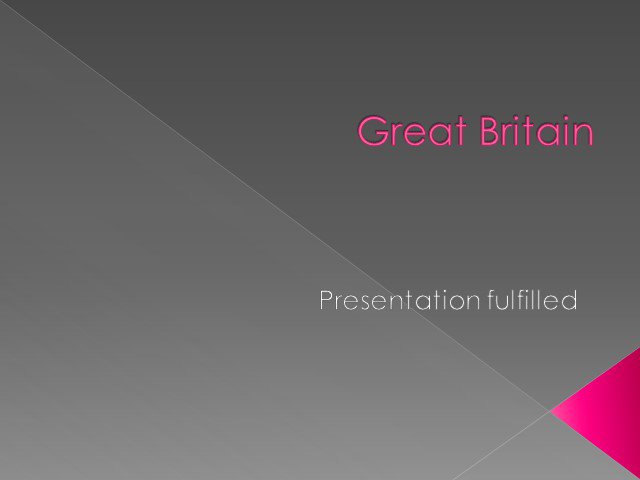 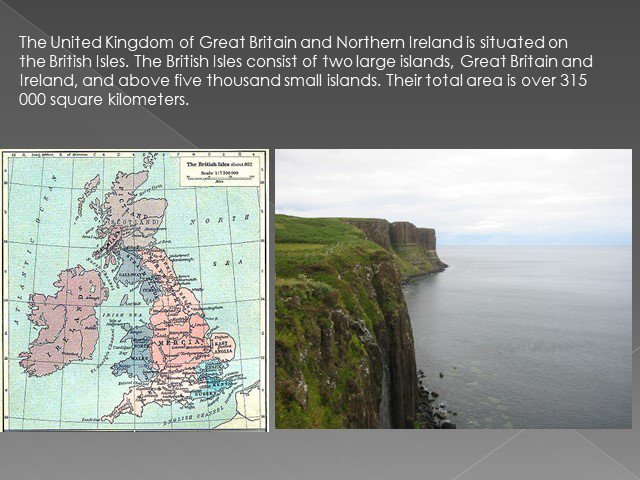 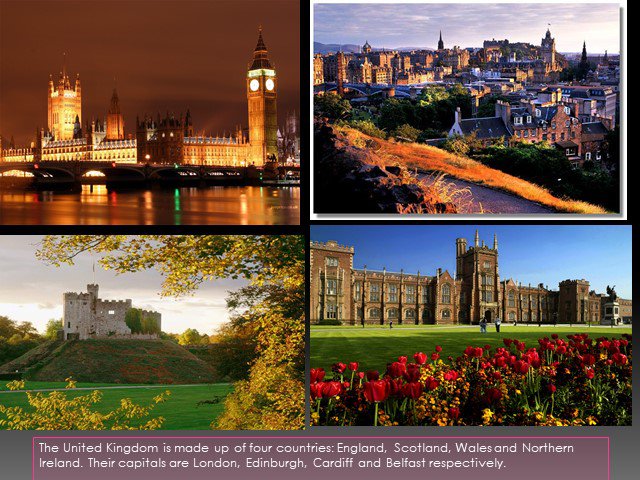 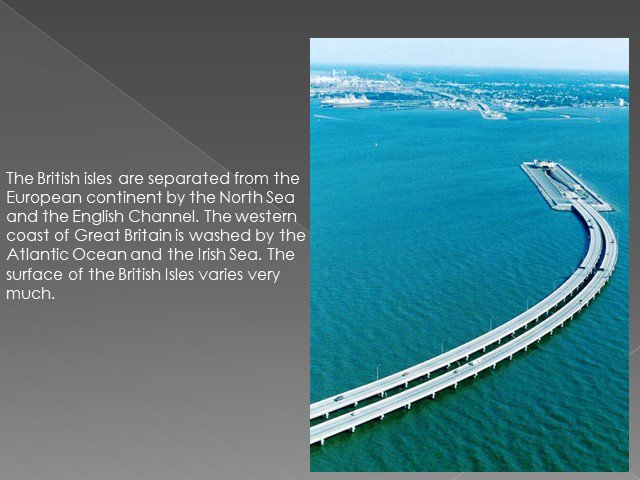 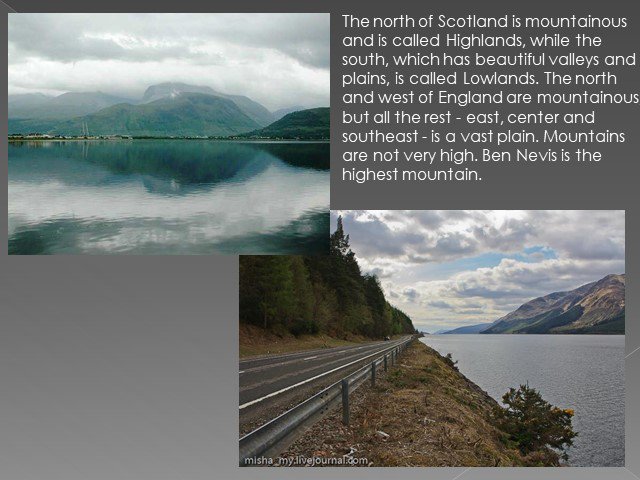 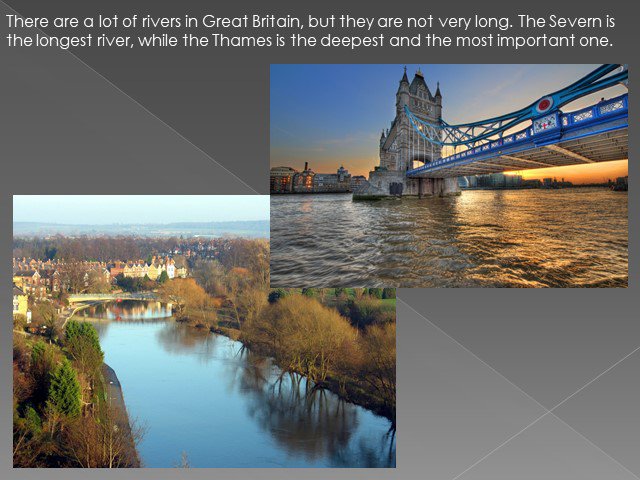 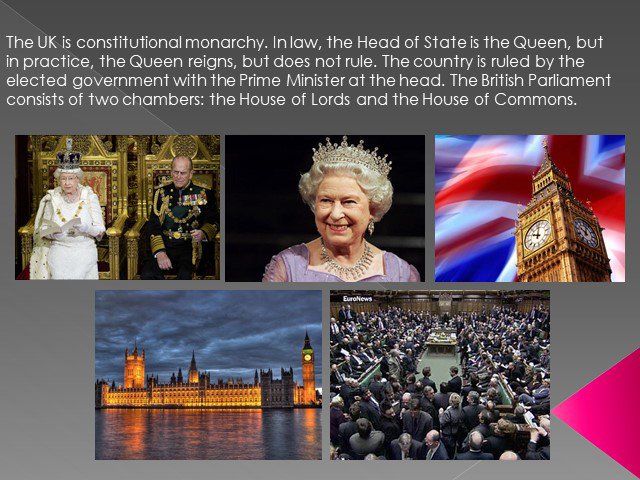 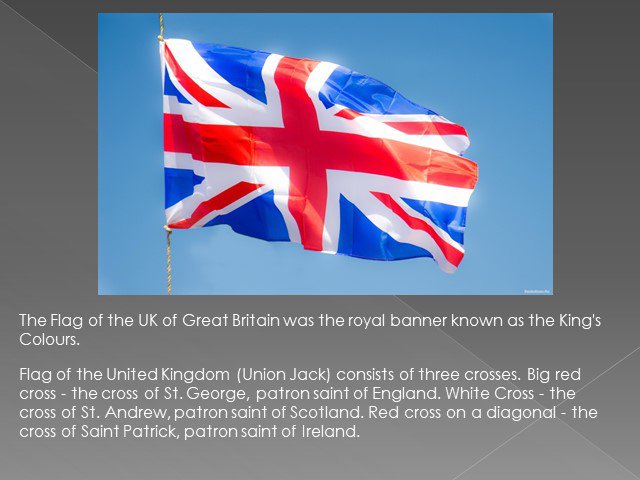 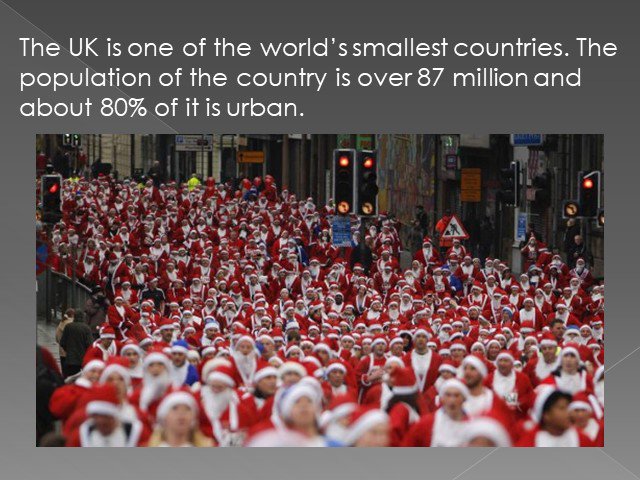 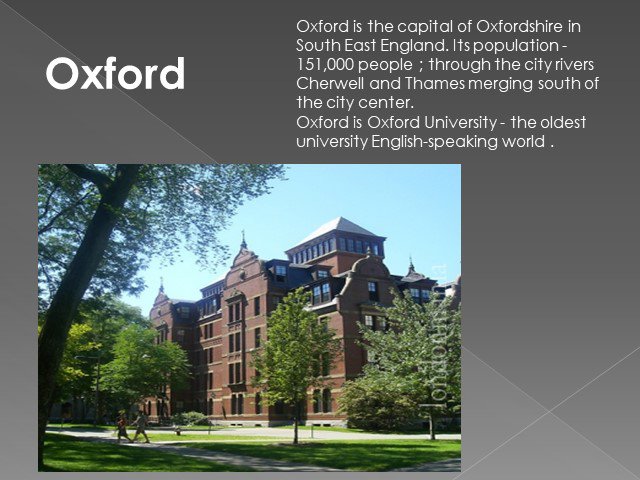 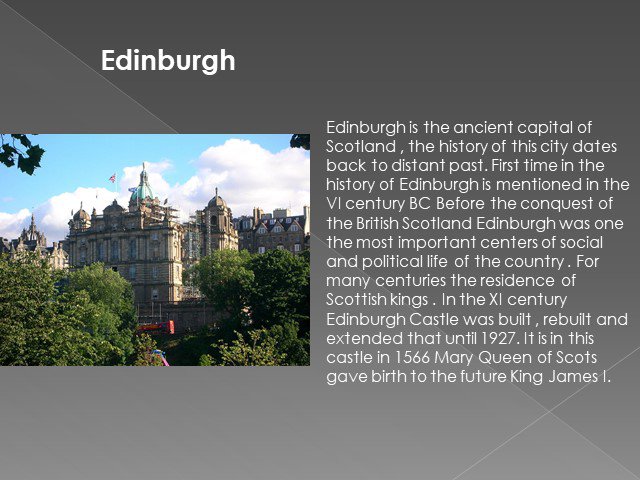 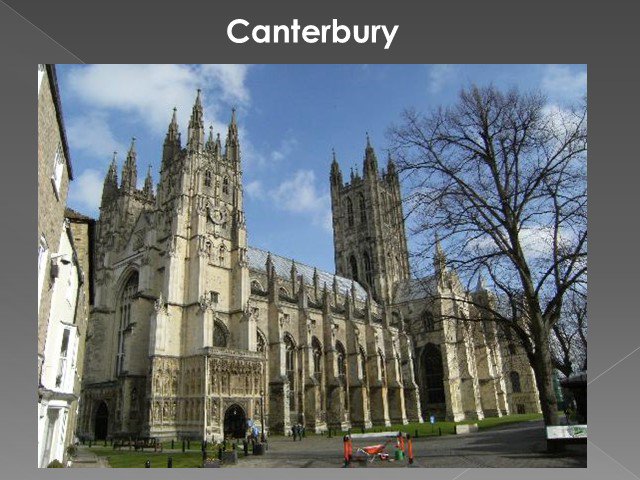 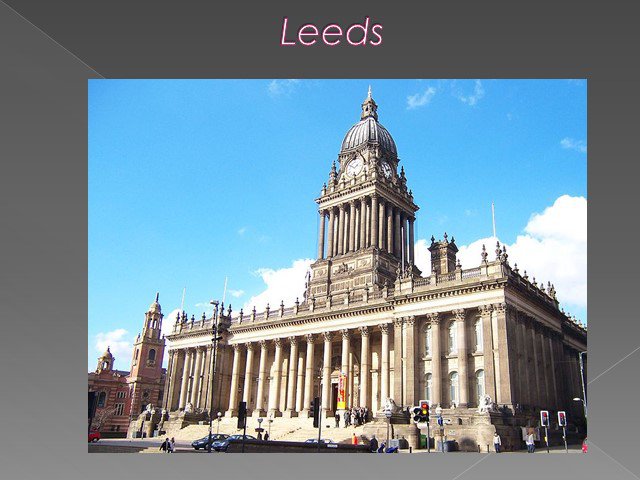 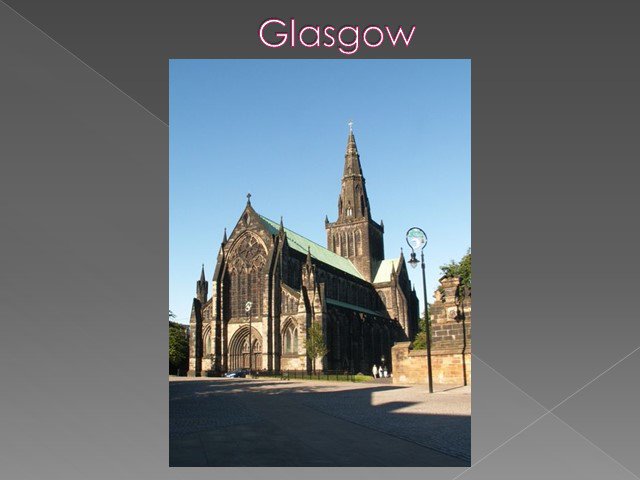 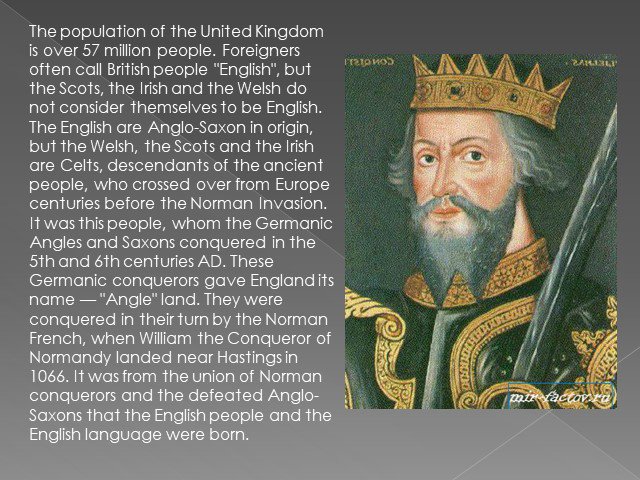 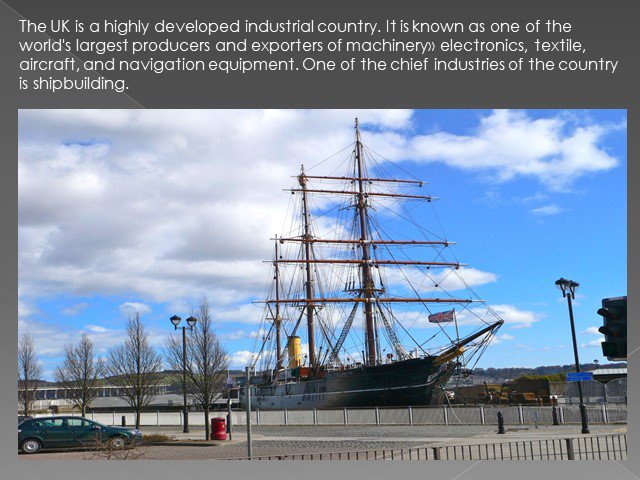 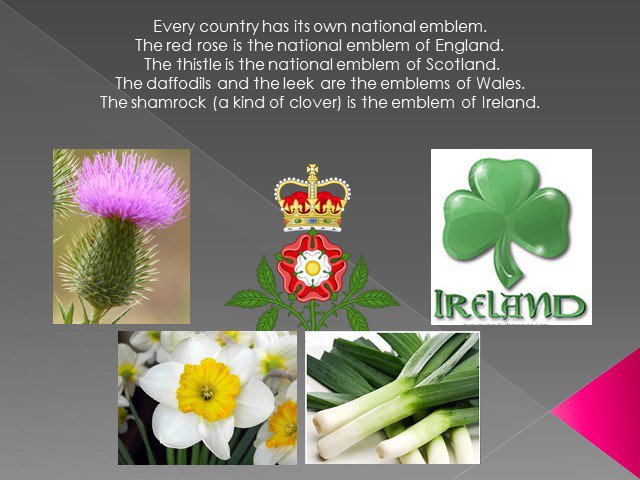 The United Kingdom is made up of four countries: England, Scotland, Wales and Northern Ireland. Their capitals are London, Edinburgh, Cardiff and Belfast respectively.

The British isles are separated from the European continent by the North Sea and the English Channel. The western coast of Great Britain is washed by the Atlantic Ocean and the Irish Sea. The surface of the British Isles varies very much.

The north of Scotland is mountainous and is called Highlands, while the south, which has beautiful valleys and plains, is called Lowlands. The north and west of England are mountainous, but all the rest - east, center and southeast - is a vast plain. Mountains are not very high. Ben Nevis is the highest mountain.

There are a lot of rivers in Great Britain, but they are not very long. The Severn is the longest river, while the Thames is the deepest and the most important one.

The UK is constitutional monarchy. In law, the Head of State is the Queen, but in practice, the Queen reigns, but does not rule. The country is ruled by the elected government with the Prime Minister at the head. The British Parliament consists of two chambers: the House of Lords and the House of Commons.

The Flag of the UK of Great Britain was the royal banner known as the King's Colours.

The UK is one of the world’s smallest countries. The population of the country is over 87 million and about 80% of it is urban.

Oxford is the capital of Oxfordshire in South East England. Its population - 151,000 people ; through the city rivers Cherwell and Thames merging south of the city center. Oxford is Oxford University - the oldest university English-speaking world .

Edinburgh is the ancient capital of Scotland , the history of this city dates back to distant past. First time in the history of Edinburgh is mentioned in the VI century BC Before the conquest of the British Scotland Edinburgh was one the most important centers of social and political life of the country . For many centuries the residence of Scottish kings . In the XI century Edinburgh Castle was built , rebuilt and extended that until 1927. It is in this castle in 1566 Mary Queen of Scots gave birth to the future King James I.

The population of the United Kingdom is over 57 million people. Foreigners often call British people "English", but the Scots, the Irish and the Welsh do not consider themselves to be English. The English are Anglo-Saxon in origin, but the Welsh, the Scots and the Irish are Celts, descendants of the ancient people, who crossed over from Europe centuries before the Norman Invasion. It was this people, whom the Germanic Angles and Saxons conquered in the 5th and 6th centuries AD. These Germanic conquerors gave England its name — "Angle" land. They were conquered in their turn by the Norman French, when William the Conqueror of Normandy landed near Hastings in 1066. It was from the union of Norman conquerors and the defeated Anglo-Saxons that the English people and the English language were born.

The UK is a highly developed industrial country. It is known as one of the world's largest producers and exporters of machinery» electronics, textile, aircraft, and navigation equipment. One of the chief industries of the country is shipbuilding.

The answer. Which is the most populous continent? Asia. What is the capital of New Zealand? Wellington. Which ocean is to the north of the Russian ...

I. Let's get acquainted! Давайте познакомимся! How are you? What is your name? How old are you? Do you have a mother? What’s your mother’s name? Can ...

NATIONAL FLAGS of Russia, Great Britain and the USA. THE BRITISH FLAG. It is called Union Jack and it symbolises the union of England. The flag is ...

Subject of research: tank building and its development. Objective: to determine the main features, stages and prospects for the development of tanks. ...

What do you know about cinema - что вы знаете о кино