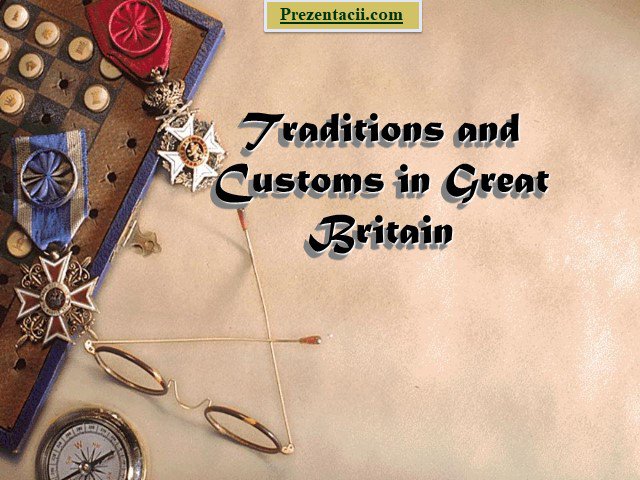 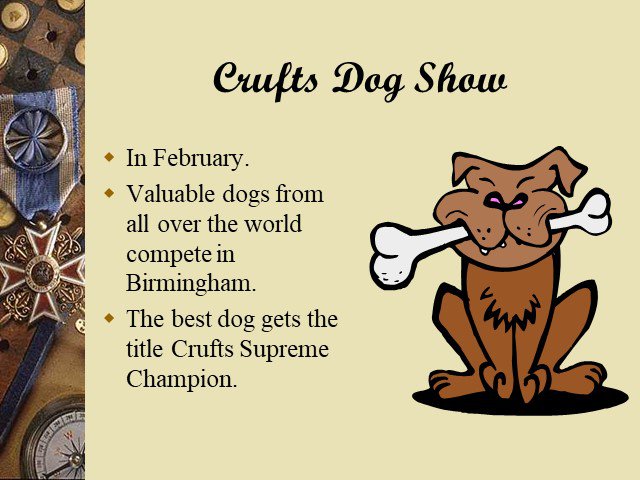 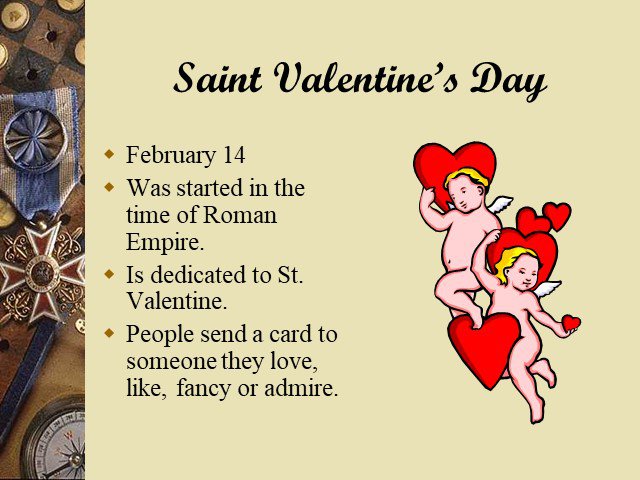 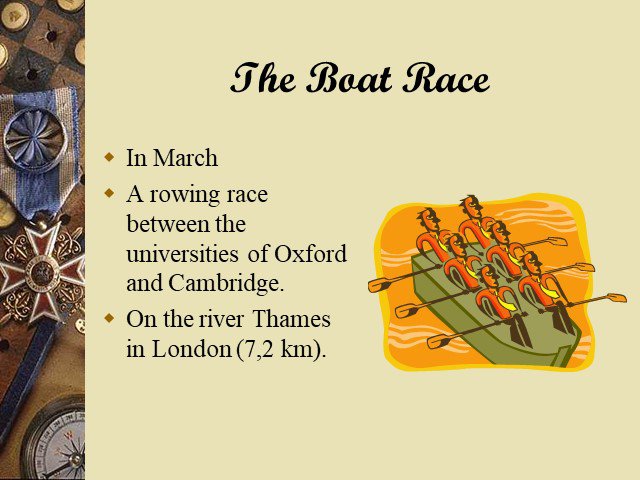 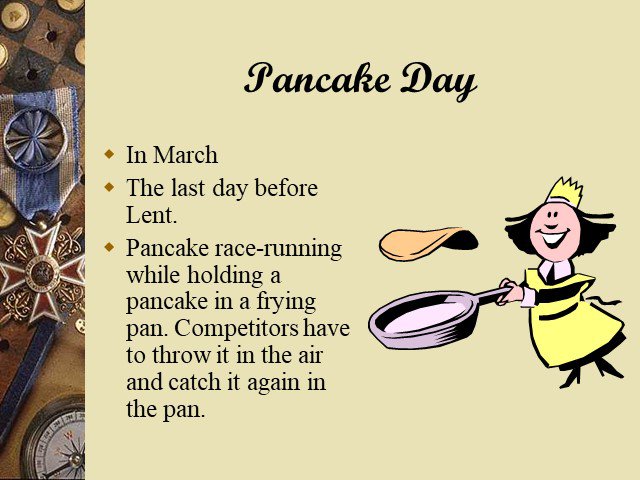 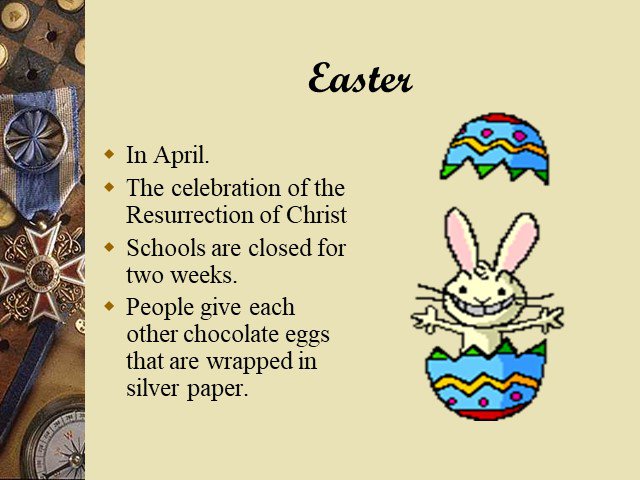 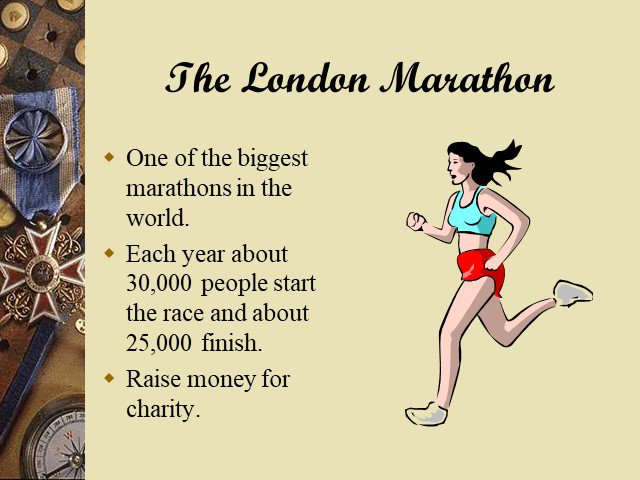 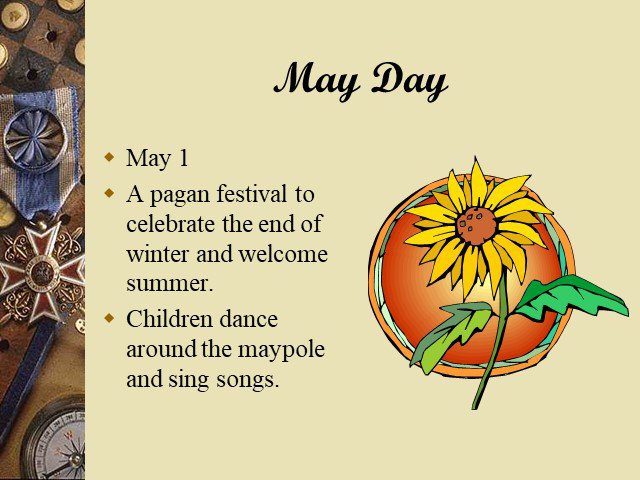 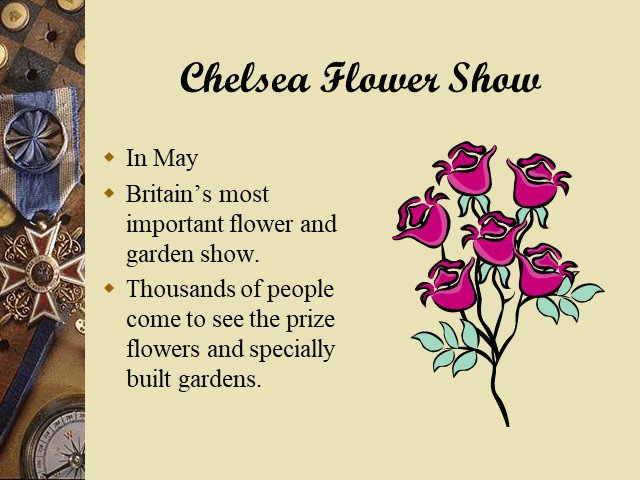 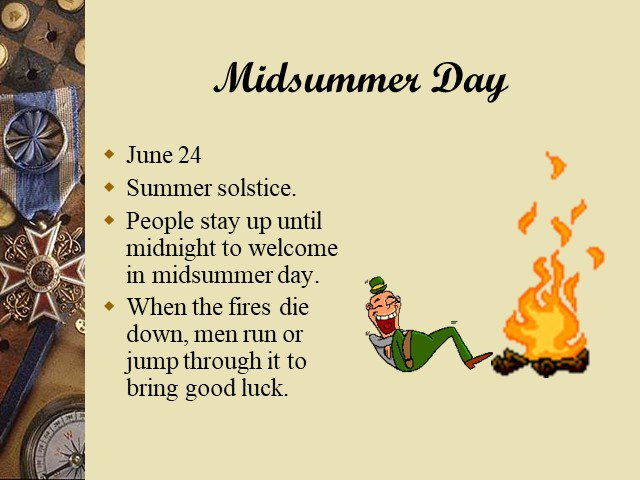 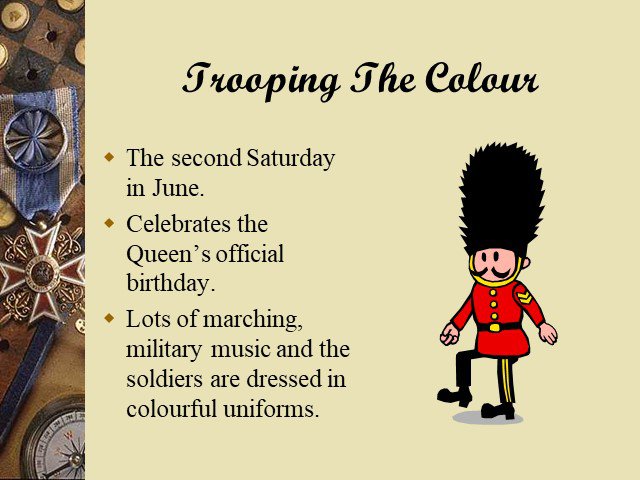 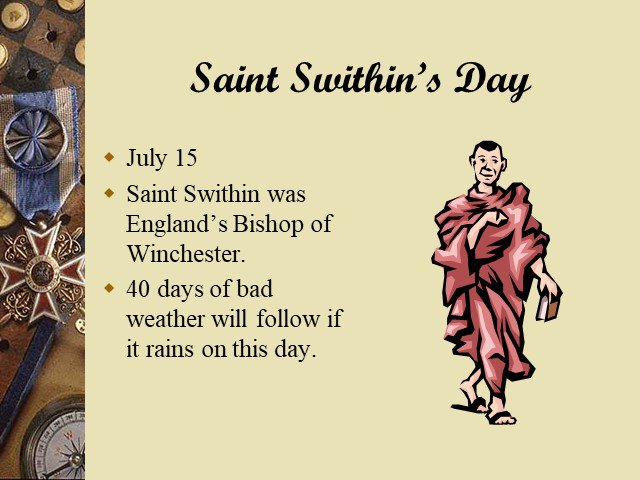 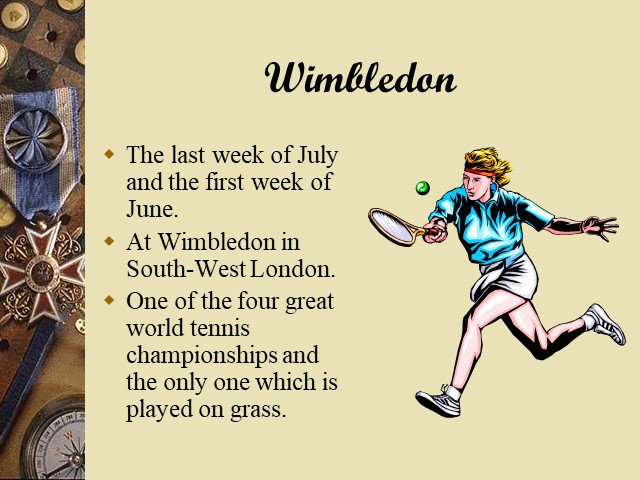 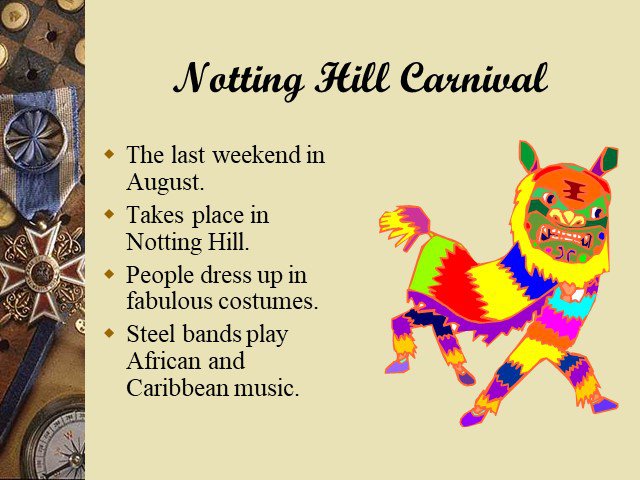 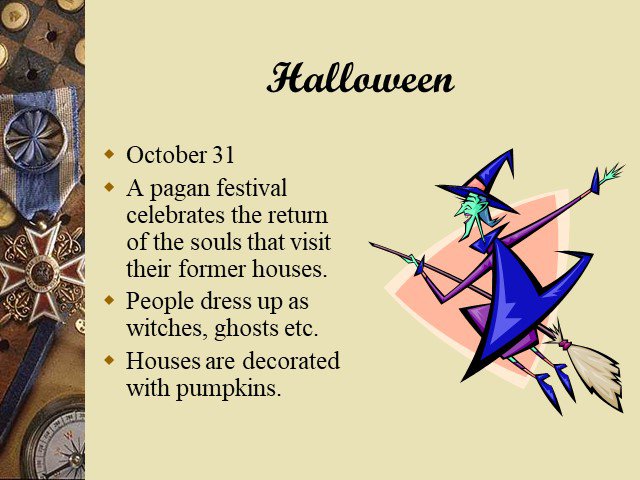 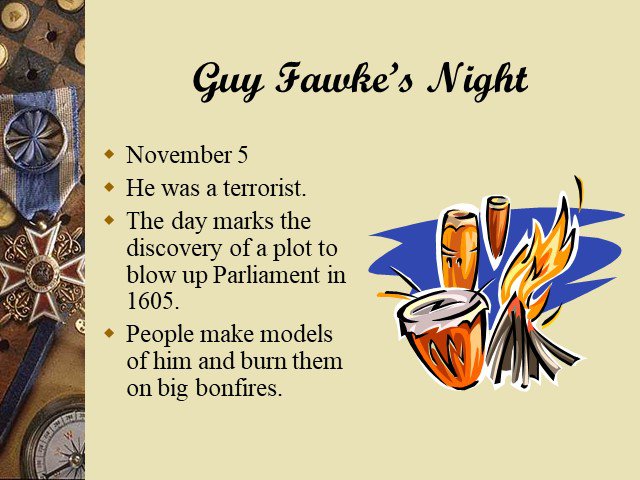 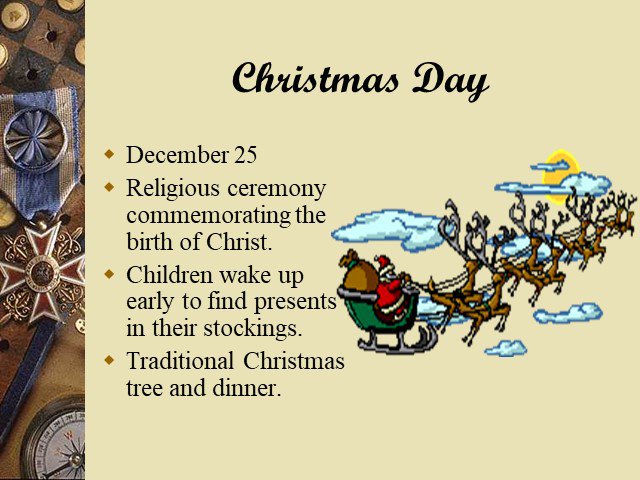 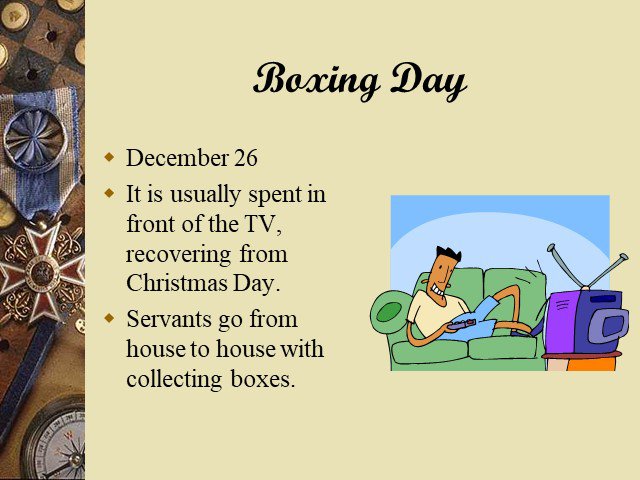 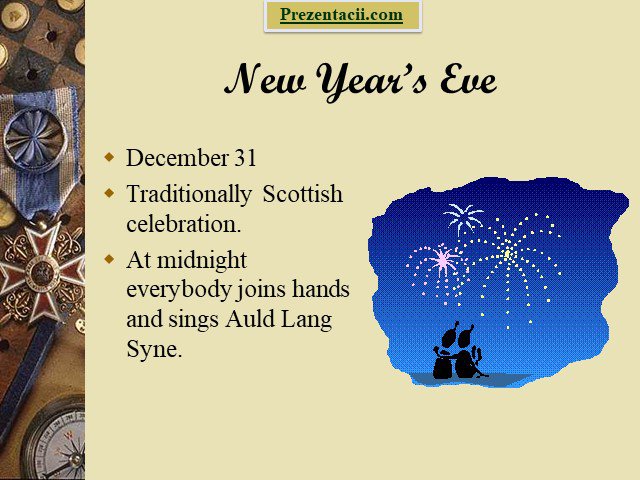 Traditions and Customs in Great Britain

In February. Valuable dogs from all over the world compete in Birmingham. The best dog gets the title Crufts Supreme Champion.

February 14 Was started in the time of Roman Empire. Is dedicated to St. Valentine. People send a card to someone they love, like, fancy or admire.

In March A rowing race between the universities of Oxford and Cambridge. On the river Thames in London (7,2 km).

In March The last day before Lent. Pancake race-running while holding a pancake in a frying pan. Competitors have to throw it in the air and catch it again in the pan.

In April. The celebration of the Resurrection of Christ Schools are closed for two weeks. People give each other chocolate eggs that are wrapped in silver paper.

One of the biggest marathons in the world. Each year about 30,000 people start the race and about 25,000 finish. Raise money for charity.

May 1 A pagan festival to celebrate the end of winter and welcome summer. Children dance around the maypole and sing songs.

In May Britain’s most important flower and garden show. Thousands of people come to see the prize flowers and specially built gardens.

June 24 Summer solstice. People stay up until midnight to welcome in midsummer day. When the fires die down, men run or jump through it to bring good luck.

The second Saturday in June. Celebrates the Queen’s official birthday. Lots of marching, military music and the soldiers are dressed in colourful uniforms.

July 15 Saint Swithin was England’s Bishop of Winchester. 40 days of bad weather will follow if it rains on this day.

The last week of July and the first week of June. At Wimbledon in South-West London. One of the four great world tennis championships and the only one which is played on grass.

October 31 A pagan festival celebrates the return of the souls that visit their former houses. People dress up as witches, ghosts etc. Houses are decorated with pumpkins.

November 5 He was a terrorist. The day marks the discovery of a plot to blow up Parliament in 1605. People make models of him and burn them on big bonfires.

December 25 Religious ceremony commemorating the birth of Christ. Children wake up early to find presents in their stockings. Traditional Christmas tree and dinner.

December 26 It is usually spent in front of the TV, recovering from Christmas Day. Servants go from house to house with collecting boxes.

Christmas in ukraine: customs and traditions

Traditions of England are the notorious three pillars on which the Earth rests. Some aspects of British life are treated with special reverence. Construction ...

Number one leisure activity. The British, in the words of Napoleon, is 'a nation of shopkeepers‘. They are also a country of compulsive shoppers. ...

What do you know about British traditions? Christmas` symbols and traditions in Britain

Britain. The country of mysteries, legends and traditions