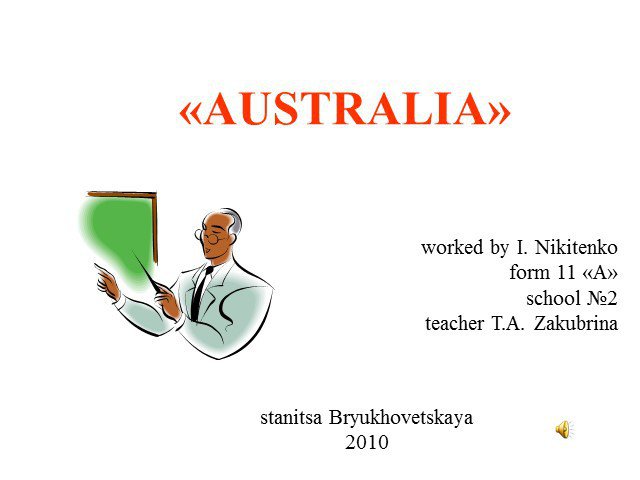 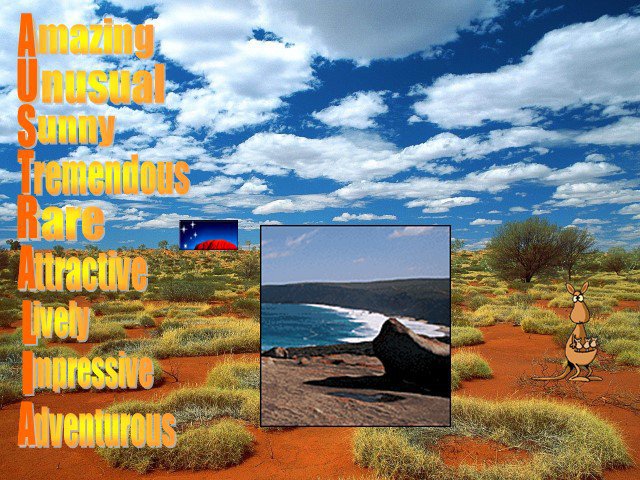 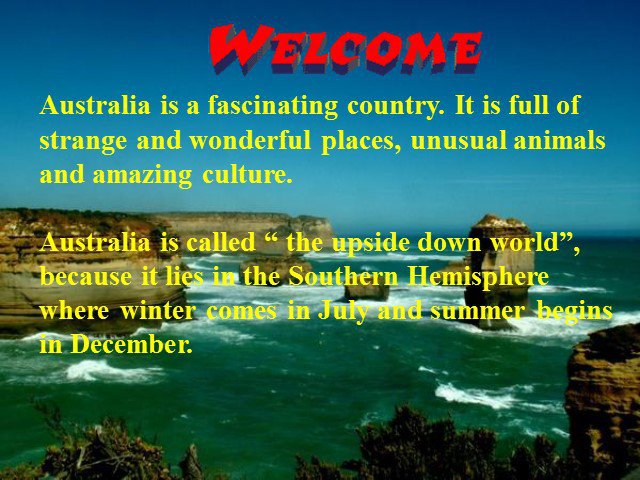 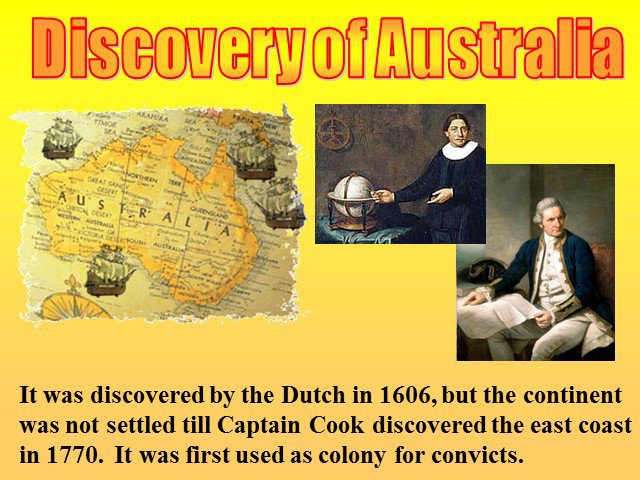 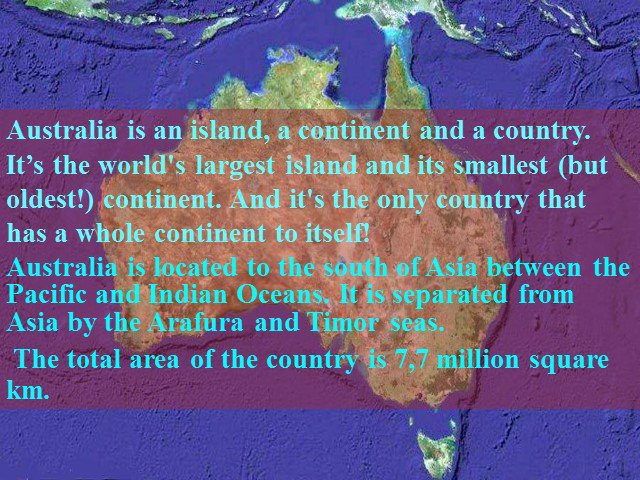 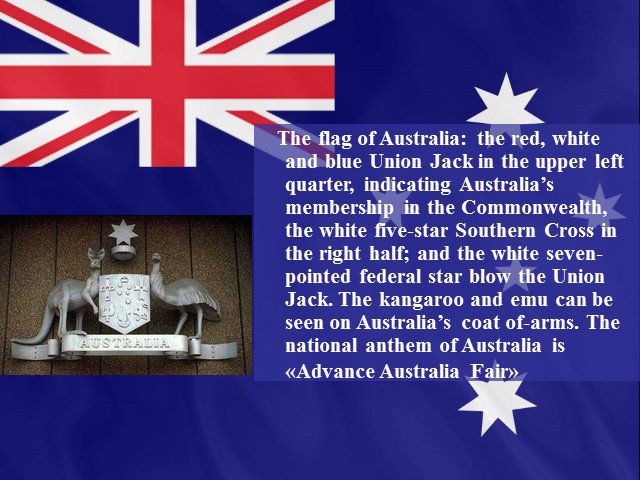 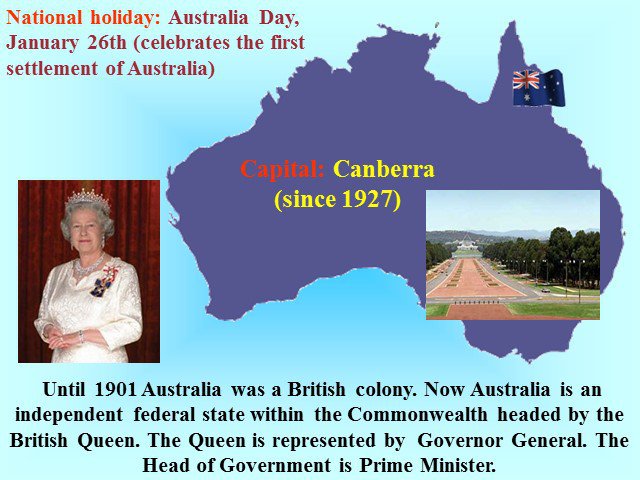 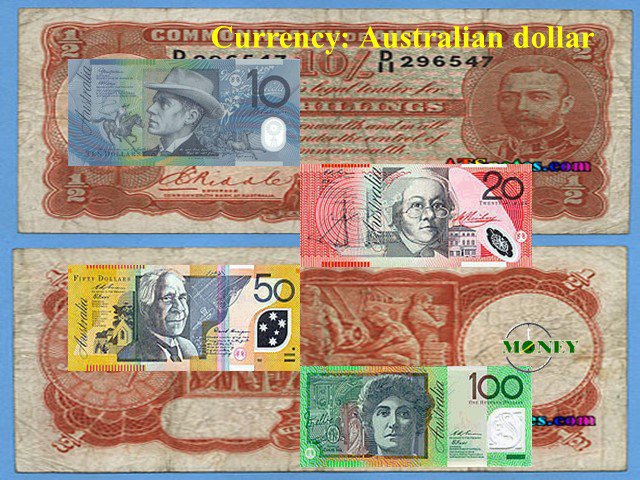 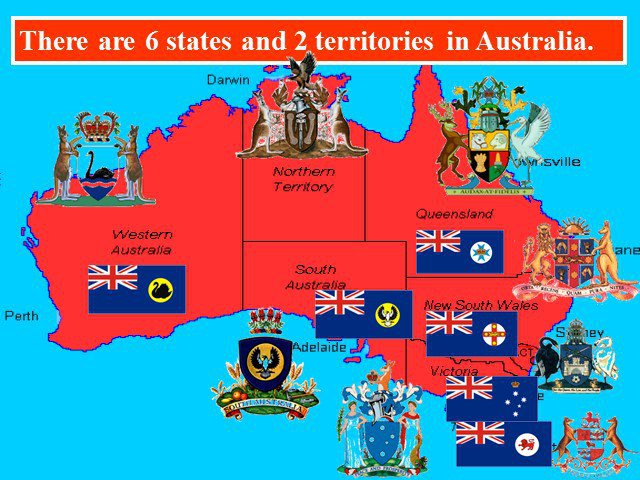 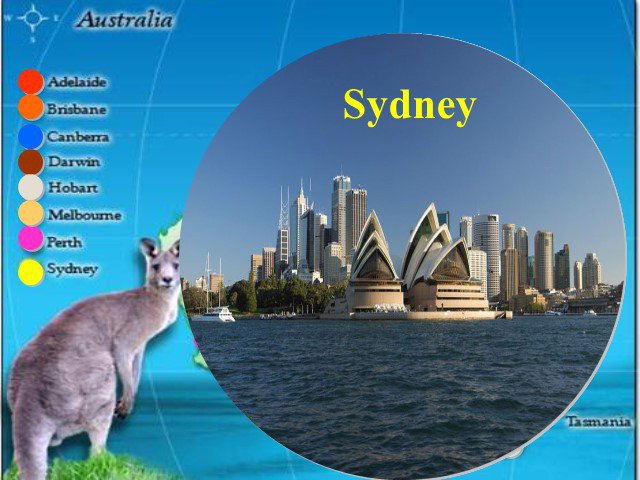 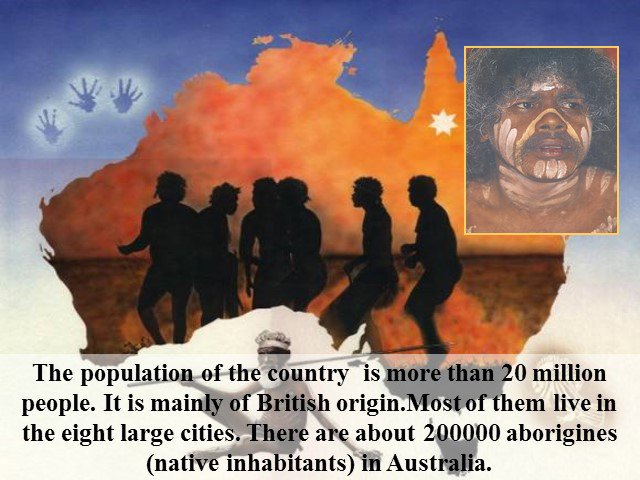 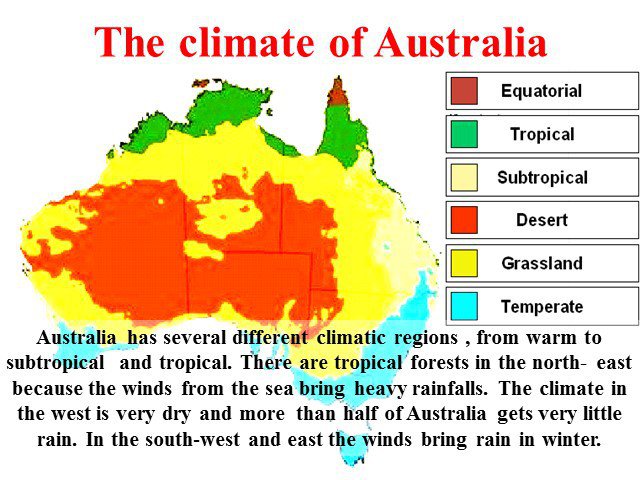 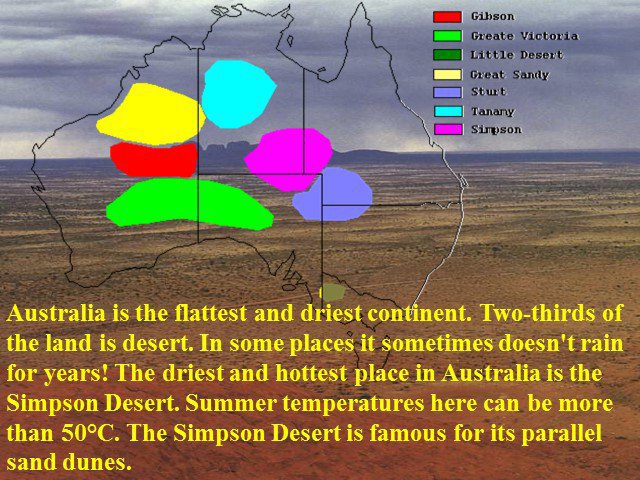 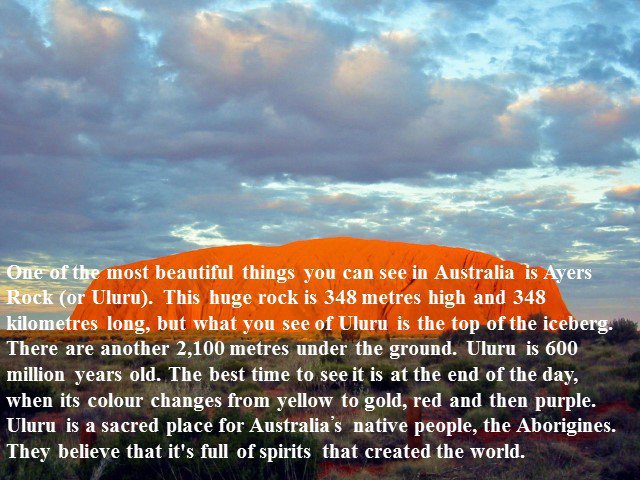 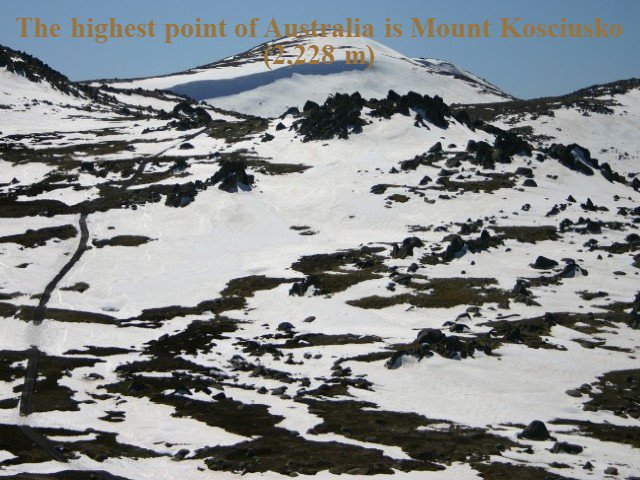 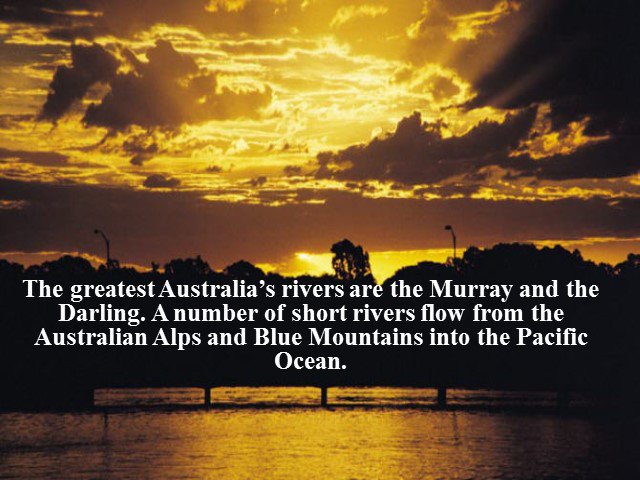 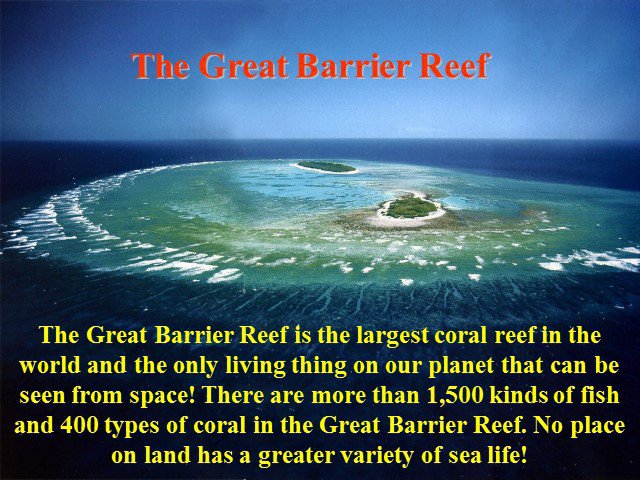 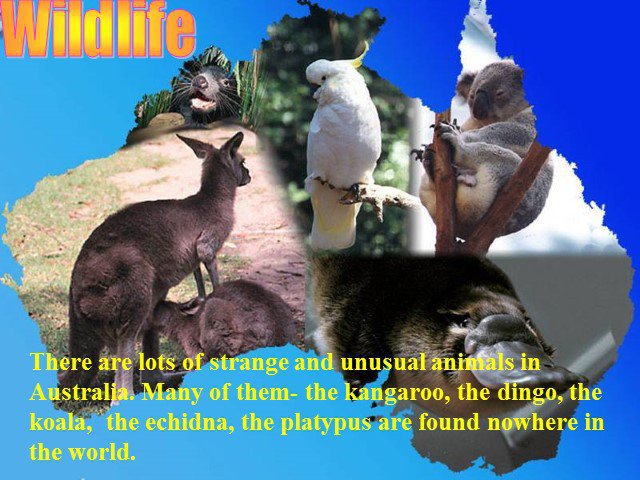 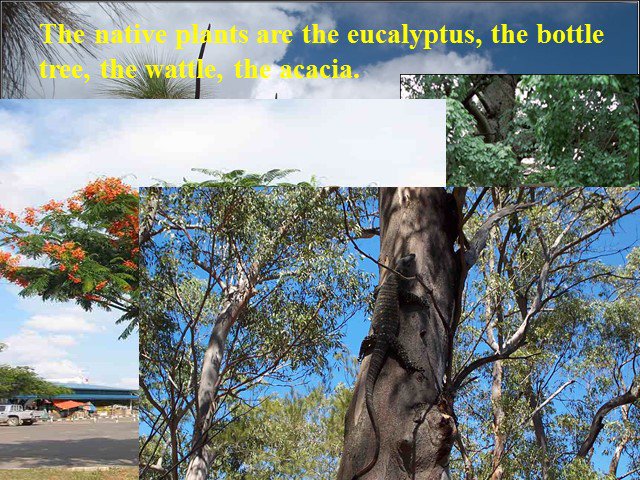 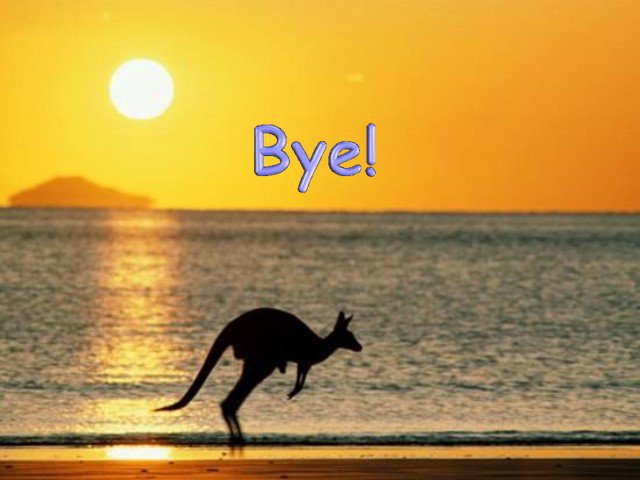 Australia is a fascinating country. It is full of strange and wonderful places, unusual animals and amazing culture. Australia is called “ the upside down world”, because it lies in the Southern Hemisphere where winter comes in July and summer begins in December.

It was discovered by the Dutch in 1606, but the continent was not settled till Captain Cook discovered the east coast in 1770. It was first used as colony for convicts.

Australia is an island, a continent and a country. It’s the world's largest island and its smallest (but oldest!) continent. And it's the only country that has a whole continent to itself! Australia is located to the south of Asia between the Pacific and Indian Oceans. It is separated from Asia by the Arafura and Timor seas. The total area of the country is 7,7 million square km.

The flag of Australia: the red, white and blue Union Jack in the upper left quarter, indicating Australia’s membership in the Commonwealth, the white five-star Southern Cross in the right half; and the white seven-pointed federal star blow the Union Jack. The kangaroo and emu can be seen on Australia’s coat of-arms. The national anthem of Australia is «Advance Australia Fair»

Until 1901 Australia was a British colony. Now Australia is an independent federal state within the Commonwealth headed by the British Queen. The Queen is represented by Governor General. The Head of Government is Prime Minister.

There are 6 states and 2 territories in Australia.

The population of the country is more than 20 million people. It is mainly of British origin.Most of them live in the eight large cities. There are about 200000 aborigines (native inhabitants) in Australia.

The climate of Australia

Australia has several different climatic regions , from warm to subtropical and tropical. There are tropical forests in the north- east because the winds from the sea bring heavy rainfalls. The climate in the west is very dry and more than half of Australia gets very little rain. In the south-west and east the winds bring rain in winter.

One of the most beautiful things you can see in Australia is Ayers Rock (or Uluru). This huge rock is 348 metres high and 348 kilometres long, but what you see of Uluru is the top of the iceberg. There are another 2,100 metres under the ground. Uluru is 600 million years old. The best time to see it is at the end of the day, when its colour changes from yellow to gold, red and then purple. Uluru is a sacred place for Australia’s native people, the Aborigines. They believe that it's full of spirits that created the world.

The highest point of Australia is Mount Kosciusko (2,228 m)

The greatest Australia’s rivers are the Murray and the Darling. A number of short rivers flow from the Australian Alps and Blue Mountains into the Pacific Ocean.

The Great Barrier Reef is the largest coral reef in the world and the only living thing on our planet that can be seen from space! There are more than 1,500 kinds of fish and 400 types of coral in the Great Barrier Reef. No place on land has a greater variety of sea life!

There are lots of strange and unusual animals in Australia. Many of them- the kangaroo, the dingo, the koala, the echidna, the platypus are found nowhere in the world.

The native plants are the eucalyptus, the bottle tree, the wattle, the acacia.

Australia officially the Commonwealth of Australia, is a country comprising the mainland of the Australian continent, the island of Tasmania and numerous ...

What Do You Know about Australia? - What is the capital of Australia? a. Sydney b. Melbourne c. Canberra - Which city is the oldest and largest? a. ...

What do you know about Australia? (choose the right answer) 1.What is the capital of Australia? 1.Sydney 2.Melbourne 3.Canberra. 2.When did Europeans ...

What do you know about Australia? (choose the right answer) 1.What is the capital of Australia? 1.Sydney 2.Melbourne 3.Canberra. 2.When did Europeans ...

What do we know about Australia?

The Commonwealth of Australia

Australia is an island, isn’t it?