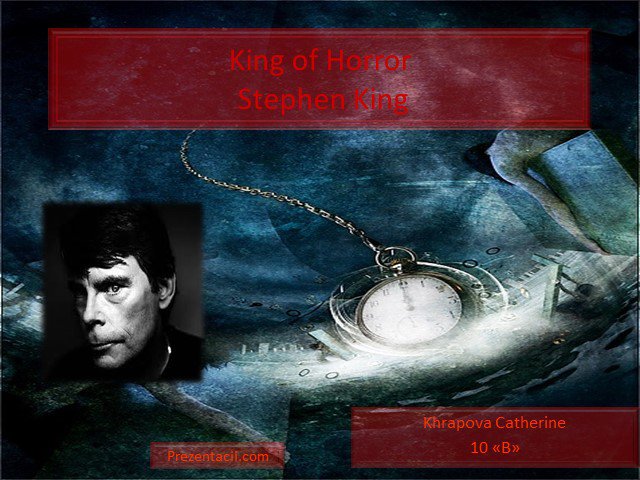 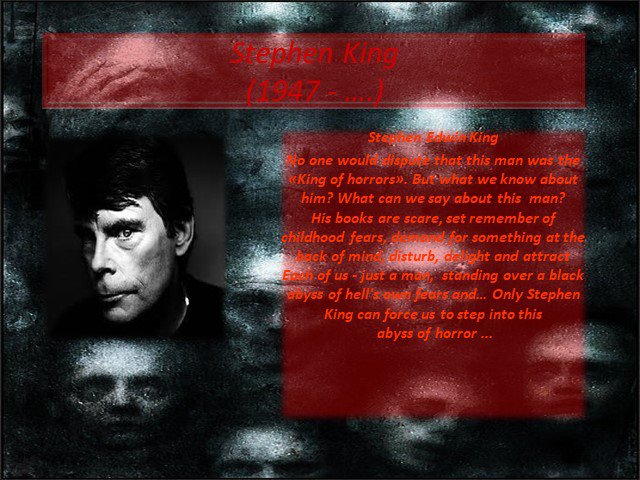 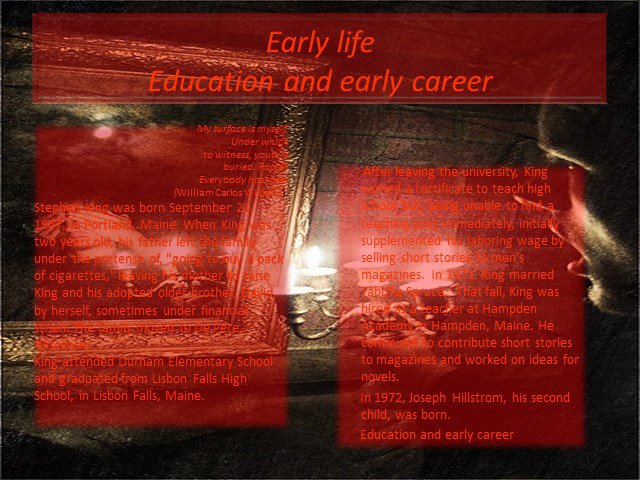 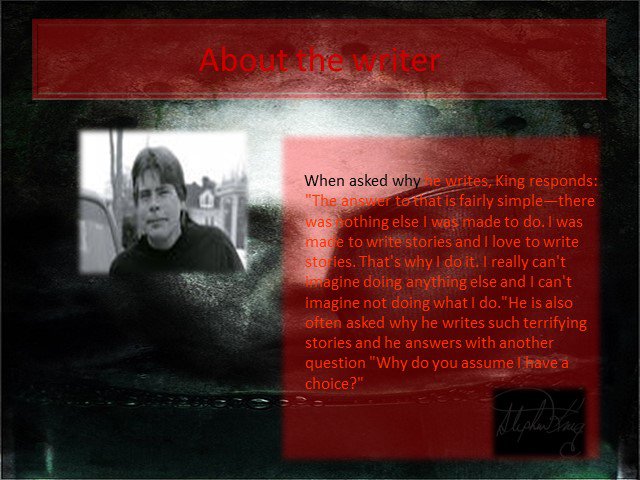 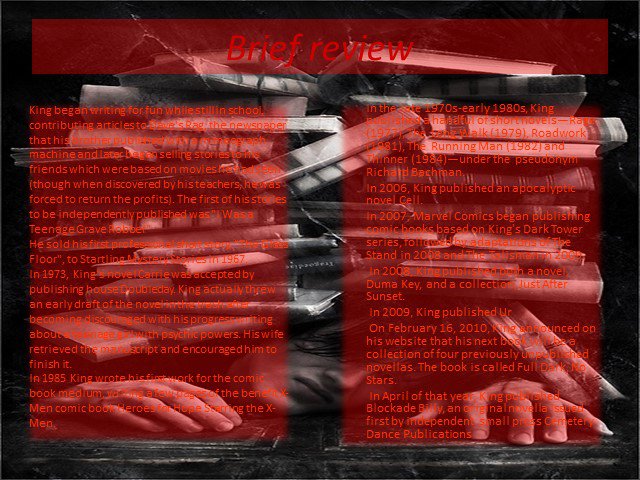 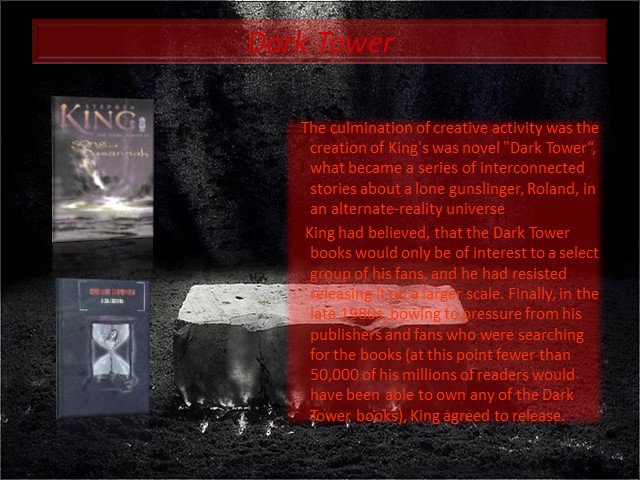 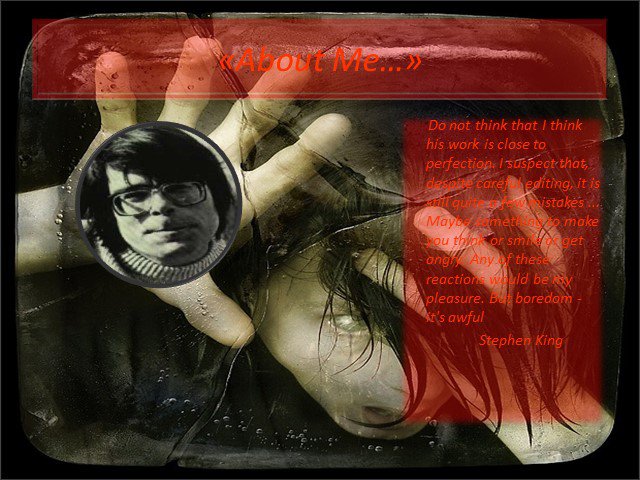 Stephen Edwin King No one would dispute that this man was the «King of horrors». But what we know about him? What can we say about this man? His books are scare, set remember of childhood fears, demand for something at the back of mind, disturb, delight and attract Each of us - just a man, standing over a black abyss of hell's own fears and… Only Stephen King can force us to step into this  abyss of horror ...

After leaving the university, King earned a certificate to teach high school but, being unable to find a teaching post immediately, initially supplemented his laboring wage by selling short stories to men's magazines. In 1971, King married Tabitha Spruce, That fall, King was hired as a teacher at Hampden Academy in Hampden, Maine. He continued to contribute short stories to magazines and worked on ideas for novels. In 1972, Joseph Hillstrom, his second child, was born. Education and early career

My surface is myself. Under which to witness, youth is buried. Roots? Everybody has roots (William Carlos Williams). Stephen King was born September 21, 1947, in Portland, Maine. When King was two years old, his father left the family under the pretense of, "going to buy a pack of cigarettes," leaving his mother to raise King and his adopted older brother, David, by herself, sometimes under financial strain. The family moved to De Pere, Wisconsin. King attended Durham Elementary School and graduated from Lisbon Falls High School, in Lisbon Falls, Maine.

When asked why he writes, King responds: "The answer to that is fairly simple—there was nothing else I was made to do. I was made to write stories and I love to write stories. That's why I do it. I really can't imagine doing anything else and I can't imagine not doing what I do."He is also often asked why he writes such terrifying stories and he answers with another question "Why do you assume I have a choice?"

In the late 1970s-early 1980s, King published a handful of short novels—Rage (1977), The Long Walk (1979), Roadwork (1981), The Running Man (1982) and Thinner (1984)—under the pseudonym Richard Bachman. In 2006, King published an apocalyptic novel Cell. In 2007, Marvel Comics began publishing comic books based on King's Dark Tower series, followed by adaptations of The Stand in 2008 and The Talisman in 2009. In 2008, King published both a novel, Duma Key, and a collection, Just After Sunset. In 2009, King published Ur On February 16, 2010, King announced on his website that his next book will be a collection of four previously unpublished novellas. The book is called Full Dark, No Stars. In April of that year, King published Blockade Billy, an original novella issued first by independent small press Cemetery Dance Publications

King began writing for fun while still in school, contributing articles to Dave's Rag, the newspaper that his brother published with a mimeograph machine and later began selling stories to his friends which were based on movies he had seen (though when discovered by his teachers, he was forced to return the profits). The first of his stories to be independently published was "I Was a Teenage Grave Robber" He sold his first professional short story, "The Glass Floor", to Startling Mystery Stories in 1967. In 1973, King's novel Carrie was accepted by publishing house Doubleday. King actually threw an early draft of the novel in the trash after becoming discouraged with his progress writing about a teenage girl with psychic powers. His wife retrieved the manuscript and encouraged him to finish it. In 1985 King wrote his first work for the comic book medium, writing a few pages of the benefit X-Men comic book Heroes for Hope Starring the X-Men.

The culmination of creative activity was the creation of King's was novel "Dark Tower“, what became a series of interconnected stories about a lone gunslinger, Roland, in an alternate-reality universe King had believed, that the Dark Tower books would only be of interest to a select group of his fans, and he had resisted releasing it on a larger scale. Finally, in the late 1980s, bowing to pressure from his publishers and fans who were searching for the books (at this point fewer than 50,000 of his millions of readers would have been able to own any of the Dark Tower books), King agreed to release.

Do not think that I think his work is close to perfection. I suspect that, despite careful editing, it is still quite a few mistakes ... Maybe something to make you think or smile or get angry. Any of these reactions would be my pleasure. But boredom - it's awful Stephen King

Political system of the uk

Welcome to the lesson