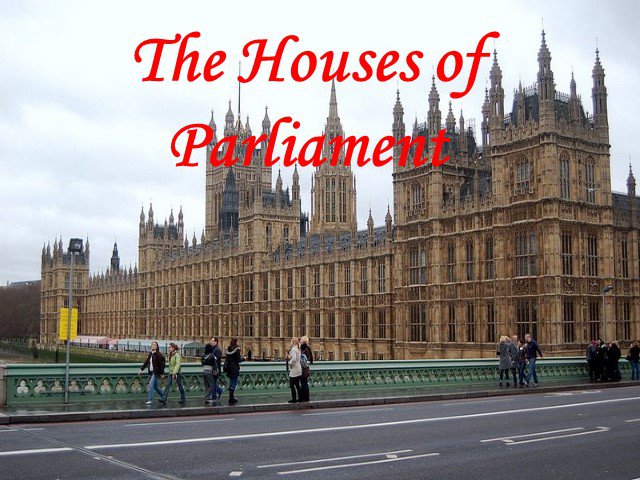 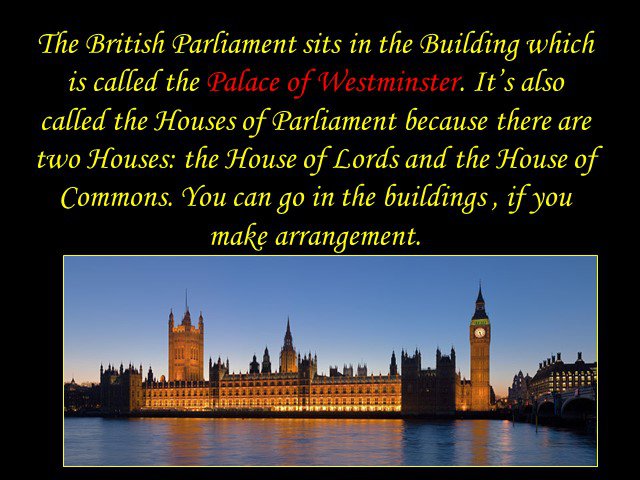 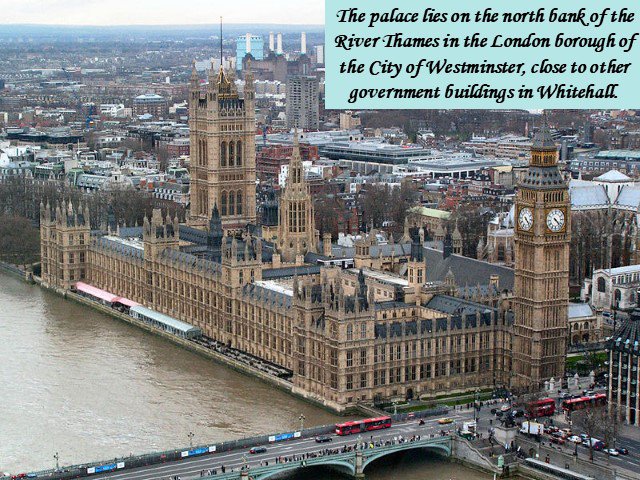 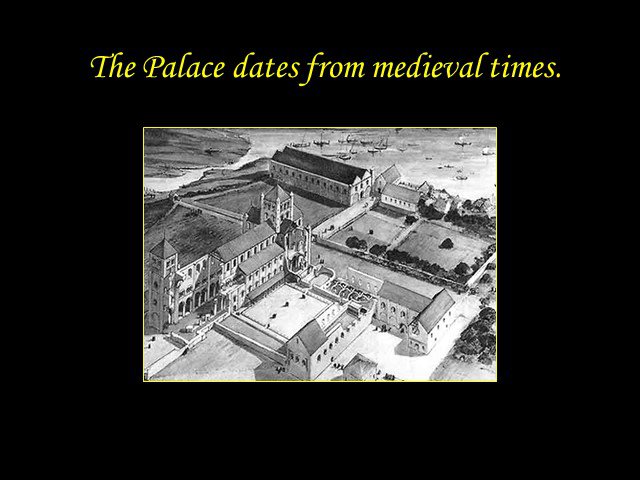 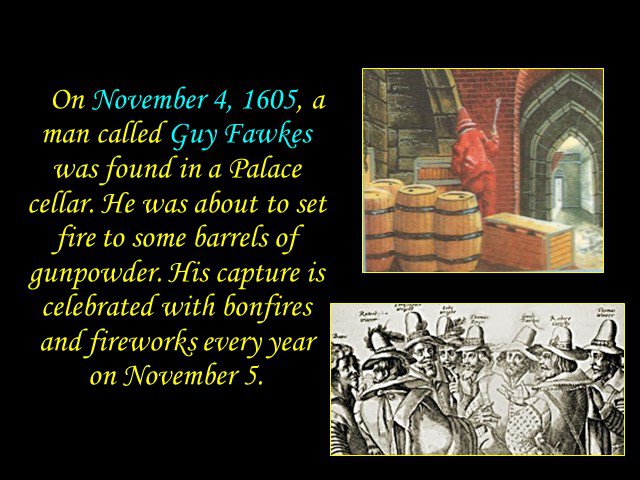 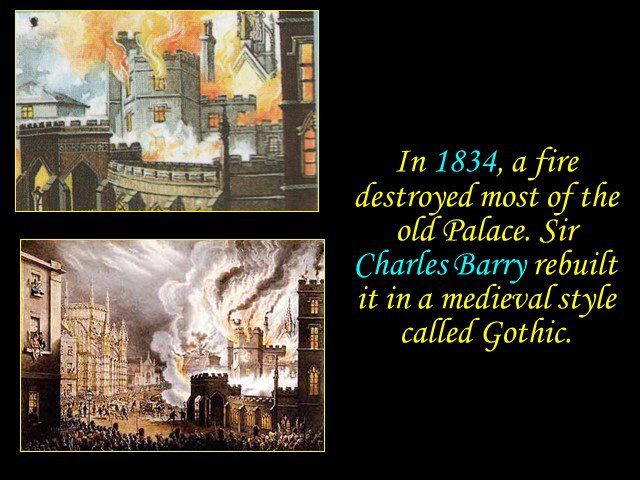 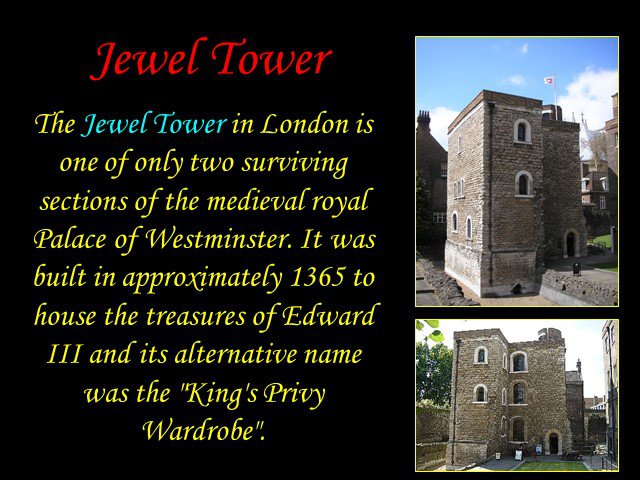 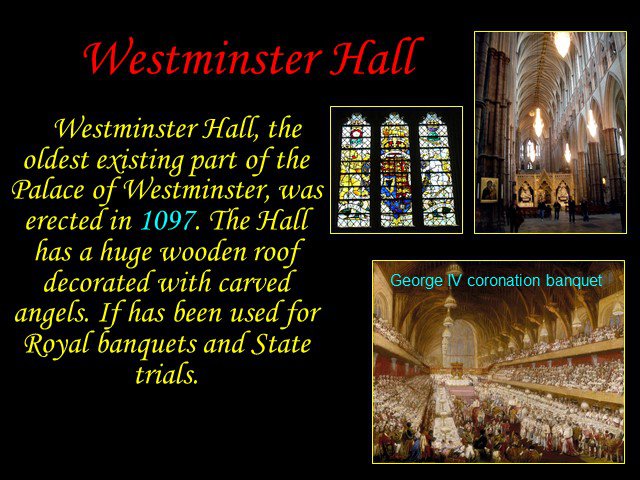 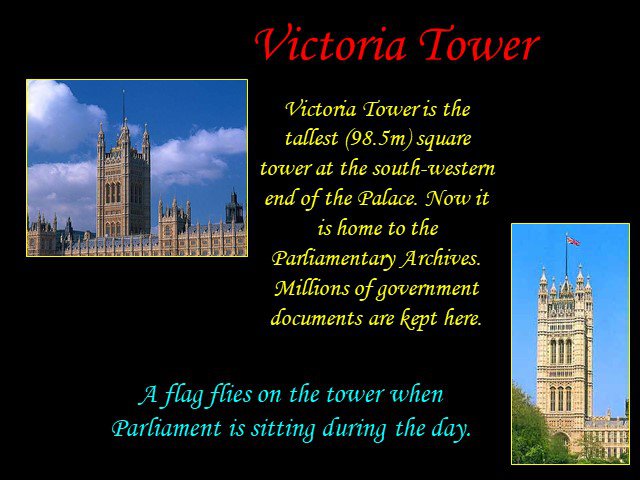 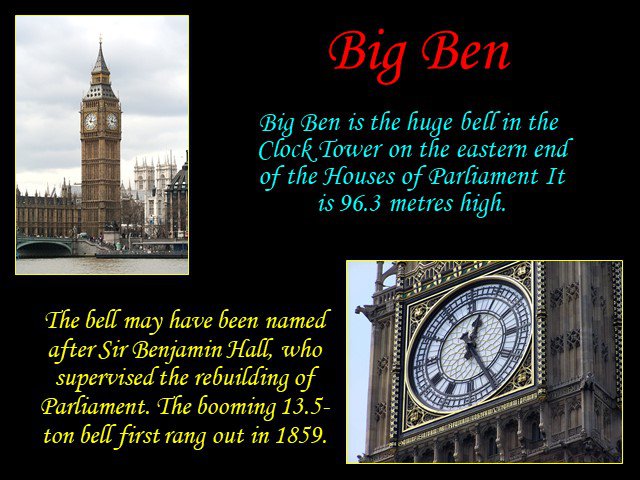 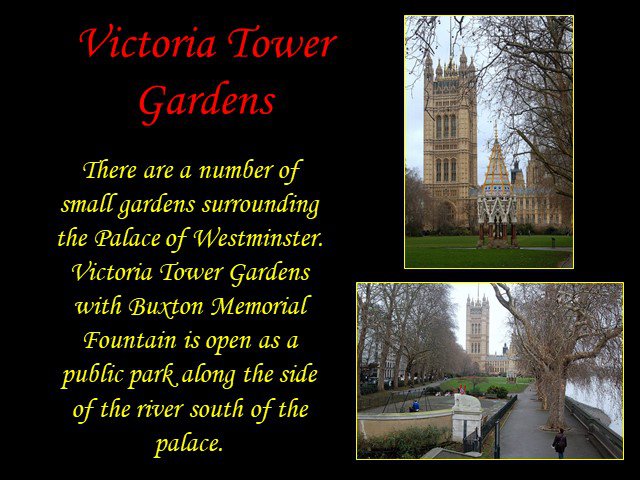 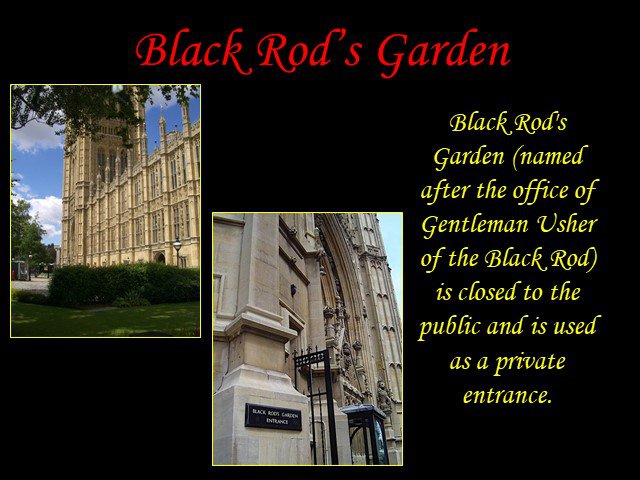 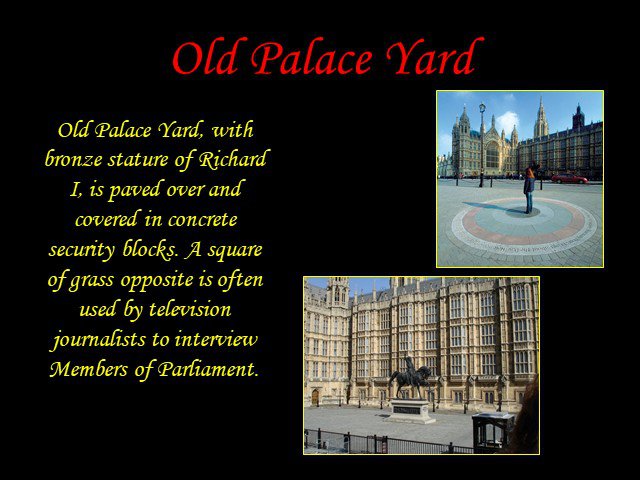 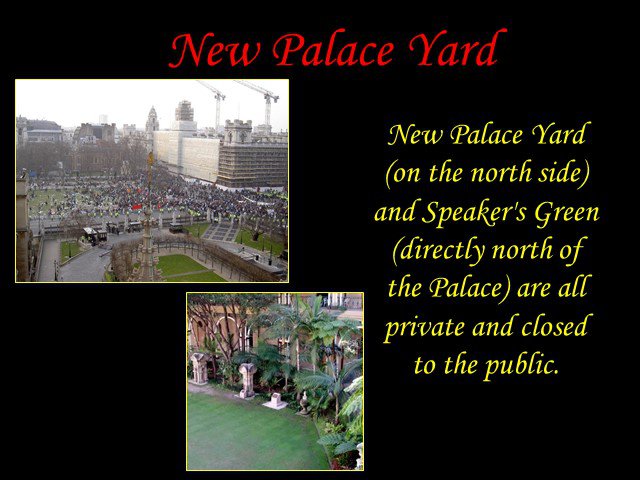 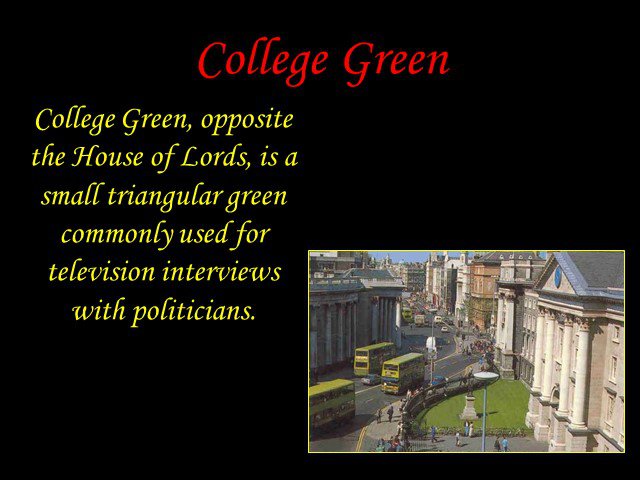 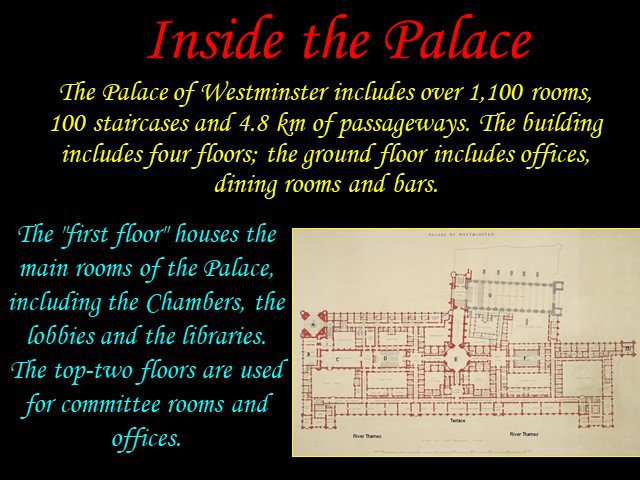 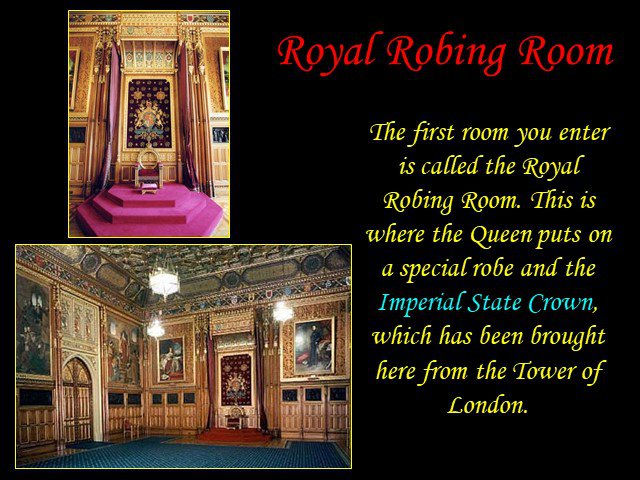 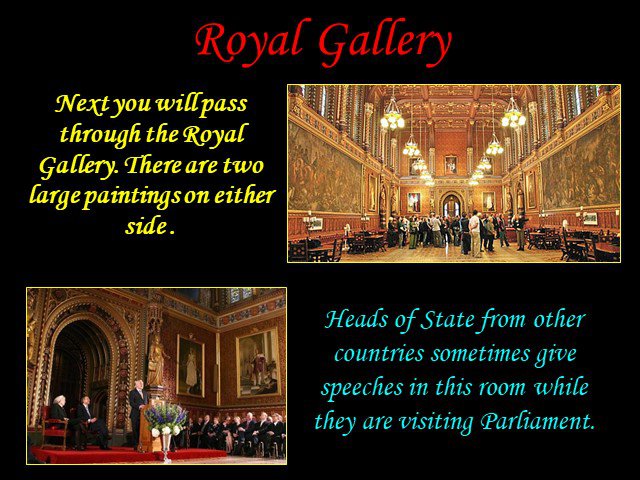 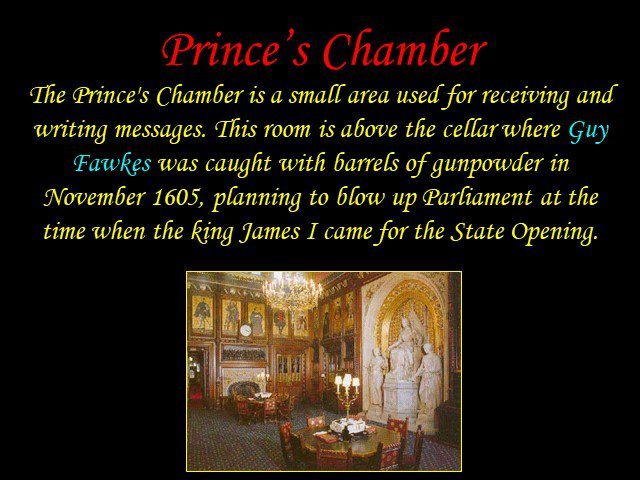 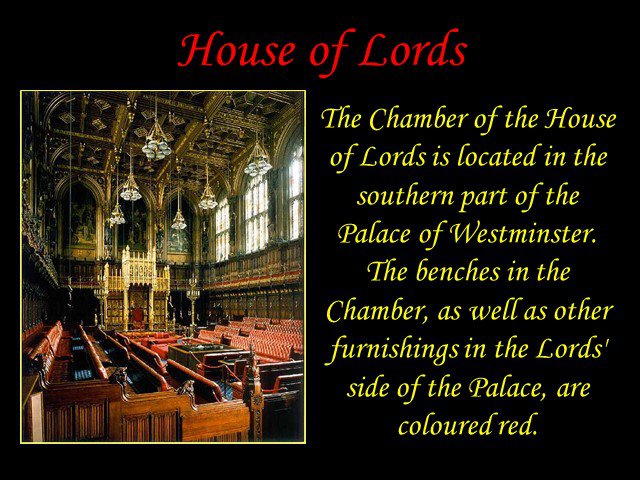 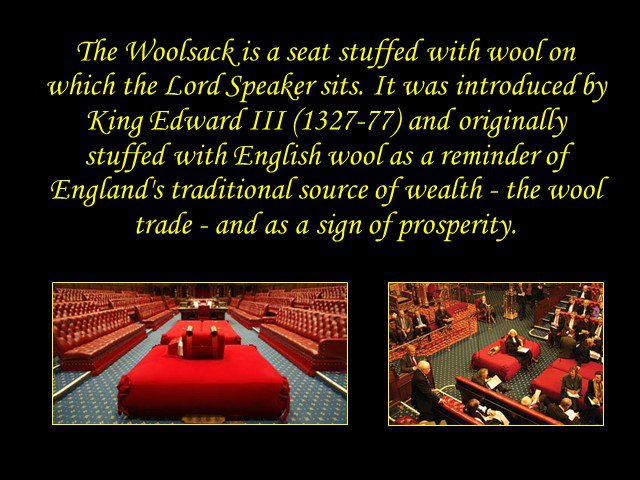 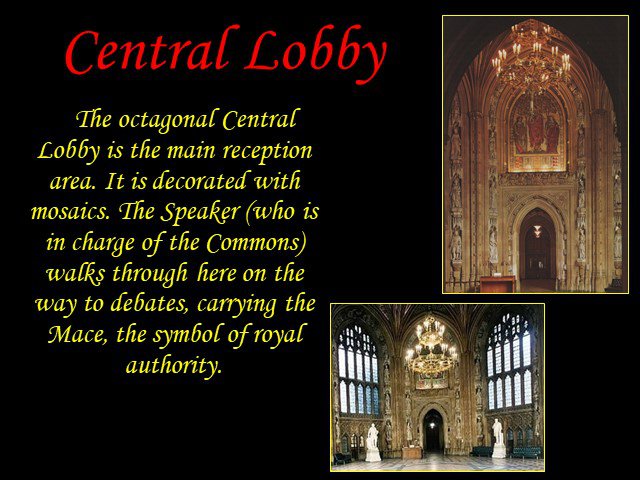 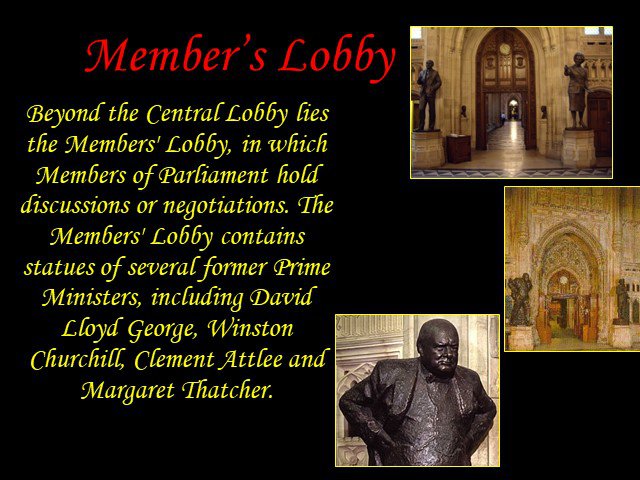 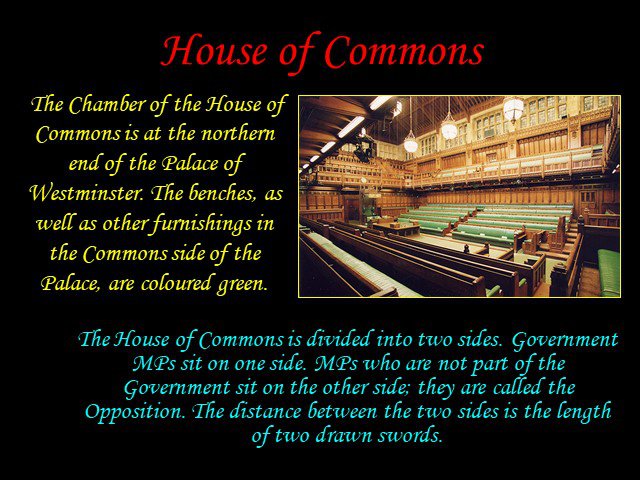 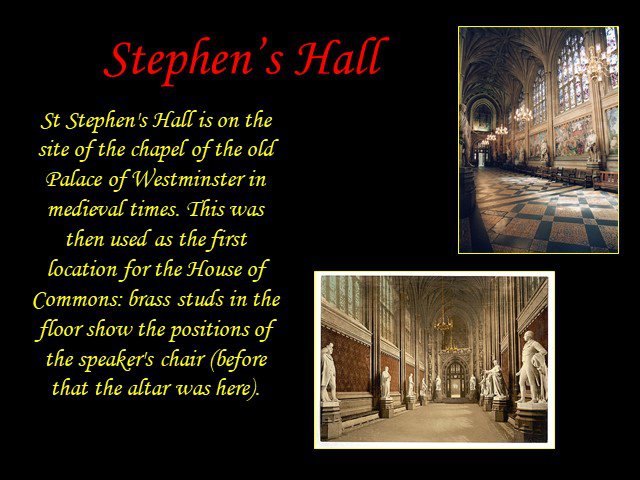 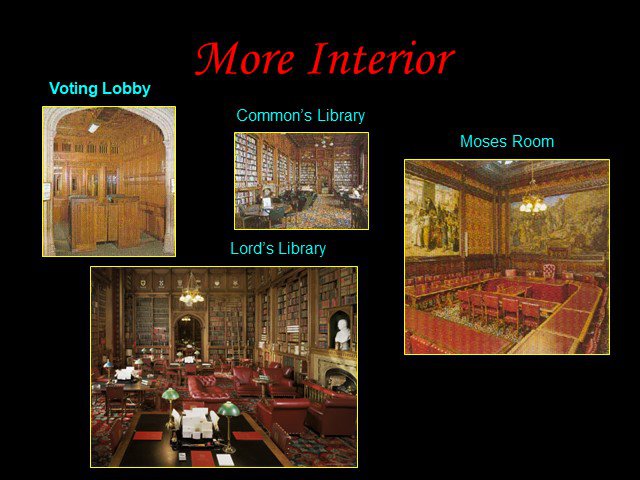 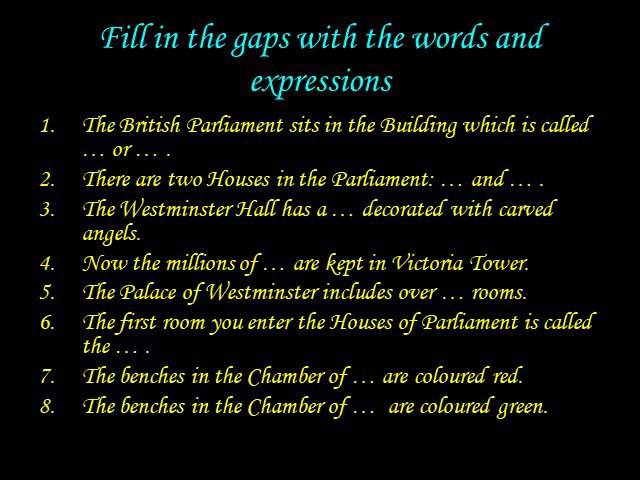 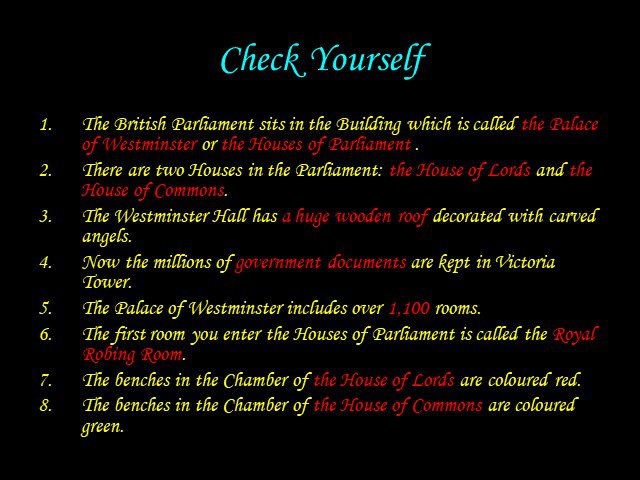 The Houses of Parliament

The palace lies on the north bank of the River Thames in the London borough of the City of Westminster, close to other government buildings in Whitehall.

The Palace dates from medieval times.

On November 4, 1605, a man called Guy Fawkes was found in a Palace cellar. He was about to set fire to some barrels of gunpowder. His capture is celebrated with bonfires and fireworks every year on November 5.

In 1834, a fire destroyed most of the old Palace. Sir Charles Barry rebuilt it in a medieval style called Gothic.

The Jewel Tower in London is one of only two surviving sections of the medieval royal Palace of Westminster. It was built in approximately 1365 to house the treasures of Edward III and its alternative name was the "King's Privy Wardrobe".

Westminster Hall, the oldest existing part of the Palace of Westminster, was erected in 1097. The Hall has a huge wooden roof decorated with carved angels. If has been used for Royal banquets and State trials.

Victoria Tower is the tallest (98.5m) square tower at the south-western end of the Palace. Now it is home to the Parliamentary Archives. Millions of government documents are kept here.

A flag flies on the tower when Parliament is sitting during the day.

Big Ben is the huge bell in the Clock Tower on the eastern end of the Houses of Parliament It is 96.3 metres high.

The bell may have been named after Sir Benjamin Hall, who supervised the rebuilding of Parliament. The booming 13.5-ton bell first rang out in 1859.

There are a number of small gardens surrounding the Palace of Westminster. Victoria Tower Gardens with Buxton Memorial Fountain is open as a public park along the side of the river south of the palace.

Black Rod's Garden (named after the office of Gentleman Usher of the Black Rod) is closed to the public and is used as a private entrance.

Old Palace Yard, with bronze stature of Richard I, is paved over and covered in concrete security blocks. A square of grass opposite is often used by television journalists to interview Members of Parliament.

New Palace Yard (on the north side) and Speaker's Green (directly north of the Palace) are all private and closed to the public.

College Green, opposite the House of Lords, is a small triangular green commonly used for television interviews with politicians.

The Palace of Westminster includes over 1,100 rooms, 100 staircases and 4.8 km of passageways. The building includes four floors; the ground floor includes offices, dining rooms and bars.

The "first floor" houses the main rooms of the Palace, including the Chambers, the lobbies and the libraries. The top-two floors are used for committee rooms and offices.

The first room you enter is called the Royal Robing Room. This is where the Queen puts on a special robe and the Imperial State Crown, which has been brought here from the Tower of London.

Next you will pass through the Royal Gallery. There are two large paintings on either side .

Heads of State from other countries sometimes give speeches in this room while they are visiting Parliament.

The Prince's Chamber is a small area used for receiving and writing messages. This room is above the cellar where Guy Fawkes was caught with barrels of gunpowder in November 1605, planning to blow up Parliament at the time when the king James I came for the State Opening.

The Chamber of the House of Lords is located in the southern part of the Palace of Westminster. The benches in the Chamber, as well as other furnishings in the Lords' side of the Palace, are coloured red.

The Woolsack is a seat stuffed with wool on which the Lord Speaker sits. It was introduced by King Edward III (1327-77) and originally stuffed with English wool as a reminder of England's traditional source of wealth - the wool trade - and as a sign of prosperity.

The octagonal Central Lobby is the main reception area. It is decorated with mosaics. The Speaker (who is in charge of the Commons) walks through here on the way to debates, carrying the Mace, the symbol of royal authority.

The Chamber of the House of Commons is at the northern end of the Palace of Westminster. The benches, as well as other furnishings in the Commons side of the Palace, are coloured green.

The House of Commons is divided into two sides. Government MPs sit on one side. MPs who are not part of the Government sit on the other side; they are called the Opposition. The distance between the two sides is the length of two drawn swords.

St Stephen's Hall is on the site of the chapel of the old Palace of Westminster in medieval times. This was then used as the first location for the House of Commons: brass studs in the floor show the positions of the speaker's chair (before that the altar was here).

Fill in the gaps with the words and expressions

How do you celebrate new year holidays? Do you know when the Old New Year is celebrated? There are 365 days in a calendar year. A solar year is actually ...

The golden age of russian literature

The River Thames. In comparison with major rivers of the world, the Thames is a very small river. It has a total length of just 346 km (215 miles) ...

The United States of America is the fourth largest country in the world (after Russia, Canada and China). It is situated in the central part of the ...

Mouse, come out of the house!

The house of my dream

The House That Jack Built

An apple a day keeps the doctor away