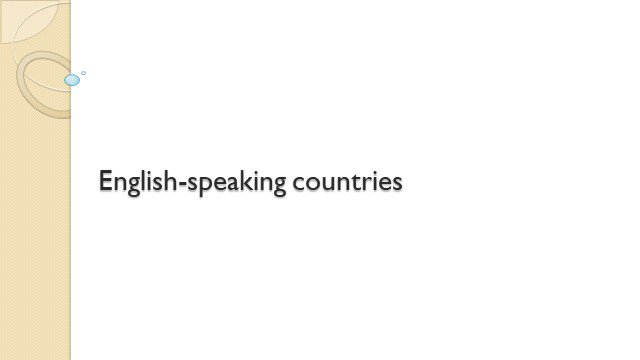 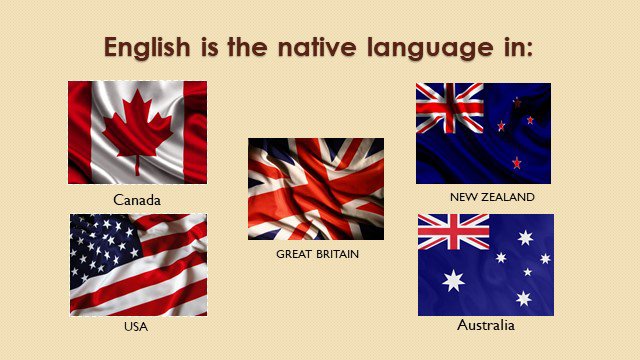 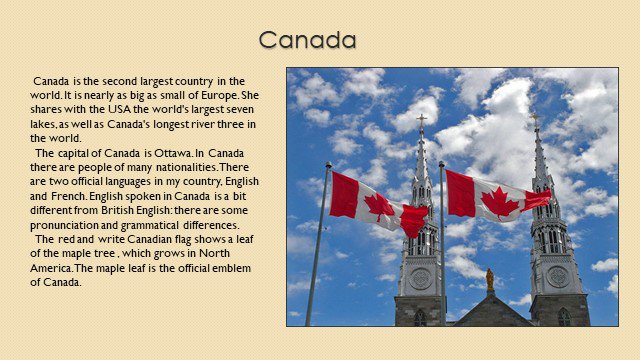 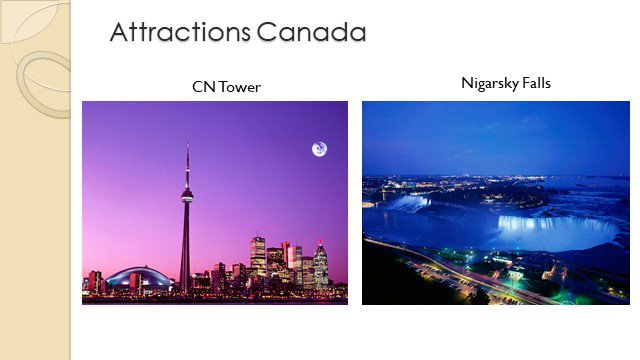 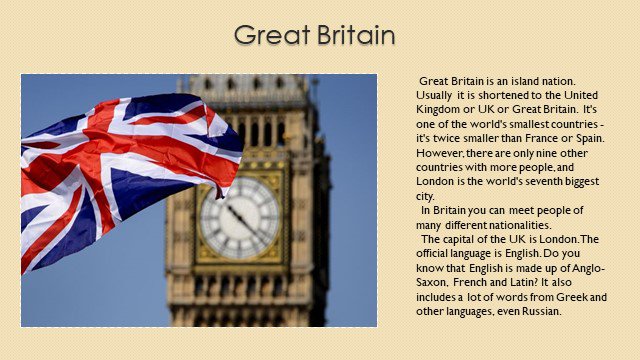 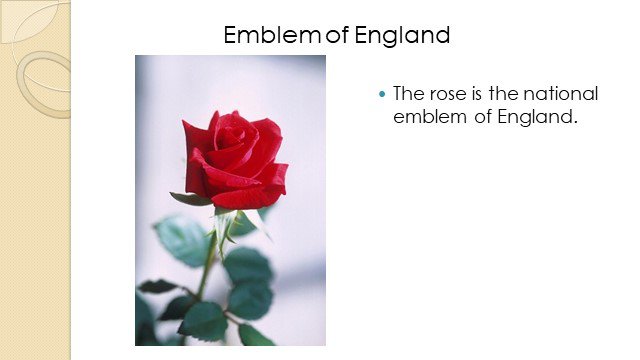 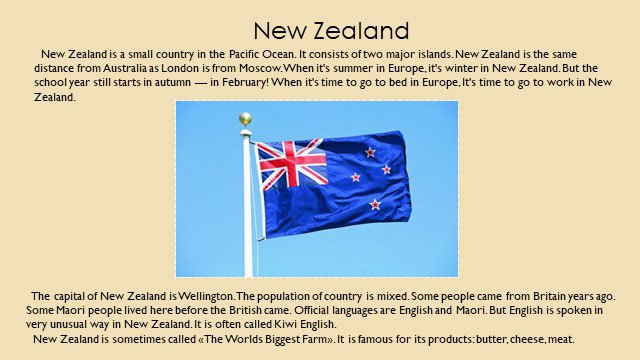 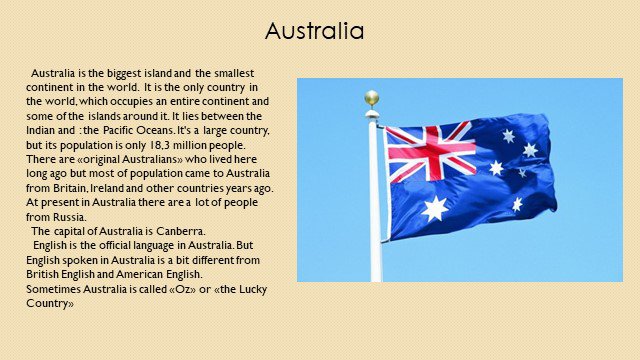 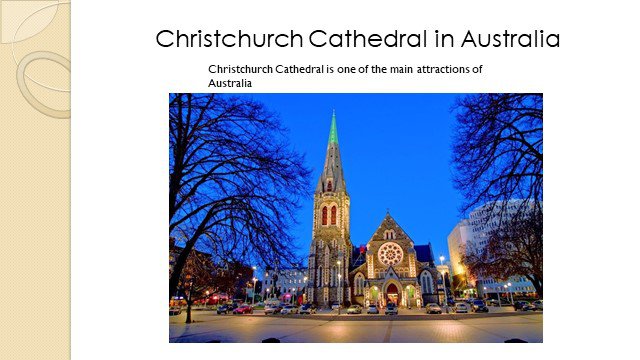 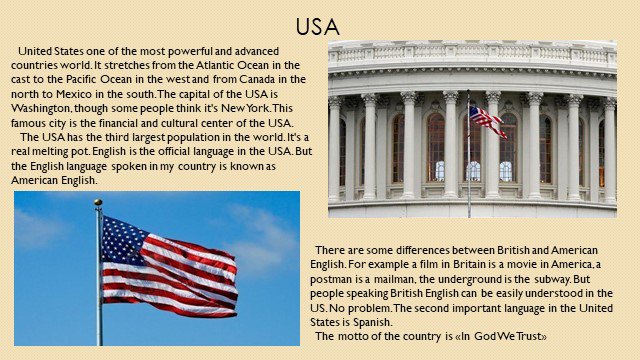 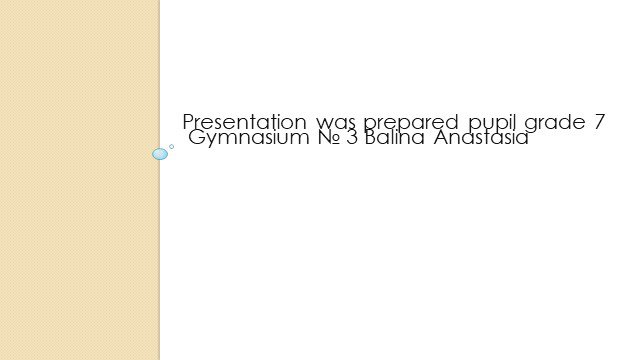 English is the native language in:

Canada is the second largest country in the world. It is nearly as big as small of Europe. She shares with the USA the world's largest seven lakes, as well as Canada's longest river three in the world. The capital of Canada is Ottawa. In Canada there are people of many nationalities. There are two official languages in my country, English and French. English spoken in Canada is a bit different from British English: there are some pronunciation and grammatical differences. The red and write Canadian flag shows a leaf of the maple tree , which grows in North America. The maple leaf is the official emblem of Canada.

Great Britain is an island nation. Usually it is shortened to the United Kingdom or UK or Great Britain. It's one of the world's smallest countries - it's twice smaller than France or Spain. However, there are only nine other countries with more people, and London is the world's seventh biggest city. In Britain you can meet people of many different nationalities. The capital of the UK is London. The official language is English. Do you know that English is made up of Anglo-Saxon, French and Latin? It also includes a lot of words from Greek and other languages, even Russian.

The rose is the national emblem of England.

The capital of New Zealand is Wellington. The population of country is mixed. Some people came from Britain years ago. Some Maori people lived here before the British came. Official languages are English and Maori. But English is spoken in very unusual way in New Zealand. It is often called Kiwi English. New Zealand is sometimes called «The Worlds Biggest Farm». It is famous for its products: butter, cheese, meat.

Australia is the biggest island and the smallest continent in the world. It is the only country in the world, which occupies an entire continent and some of the islands around it. It lies between the Indian and : the Pacific Oceans. It's a large country, but its population is only 18,3 million people. There are «original Australians» who lived here long ago but most of population came to Australia from Britain, Ireland and other countries years ago. At present in Australia there are a lot of people from Russia. The capital of Australia is Canberra. English is the official language in Australia. But English spoken in Australia is a bit different from British English and American English. Sometimes Australia is called «Oz» or «the Lucky Country»

Christchurch Cathedral is one of the main attractions of Australia

United States one of the most powerful and advanced countries world. It stretches from the Atlantic Ocean in the cast to the Pacific Ocean in the west and from Canada in the north to Mexico in the south. The capital of the USA is Washington, though some people think it's New York. This famous city is the financial and cultural center of the USA. The USA has the third largest population in the world. It's a real melting pot. English is the official language in the USA. But the English language spoken in my country is known as American English.

There are some differences between British and American English. For example a film in Britain is a movie in America, a postman is a mailman, the underground is the subway. But people speaking British English can be easily understood in the US. No problem. The second important language in the United States is Spanish. The motto of the country is «In God We Trust»

Hello! I’m Natasha. I’m from Russia. I can speak Russian and English, but I can’t speak French. - Where’s Avril Lavin from? - She’s from Canada. She’s ...

The population is mixed. The official languages are Maori and English. English is often called Kiwi English. The capital is Wellington. NEW ZEALAND. ...

The largest country is Russia. The smallest country is the Vatican. English is the native language in:. The United Kingdom of Great Britain and Northern ...

What do English-speaking people think about their countries?