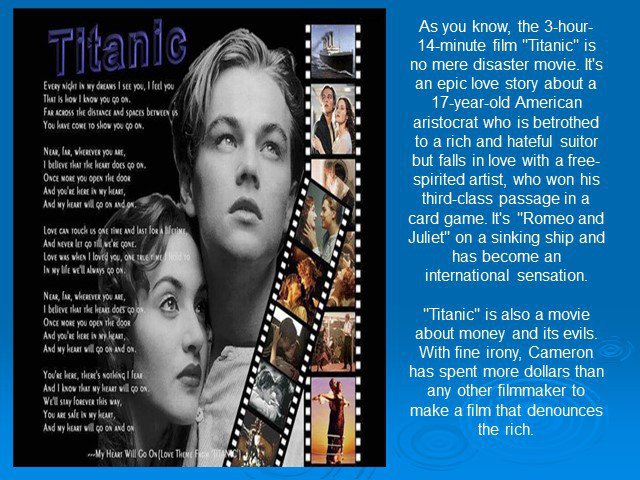 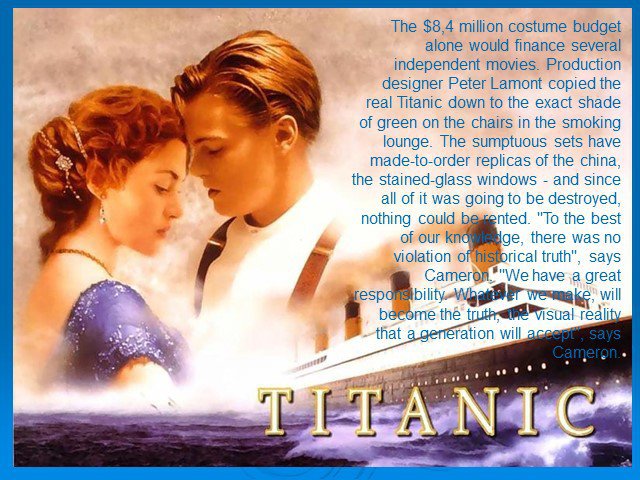 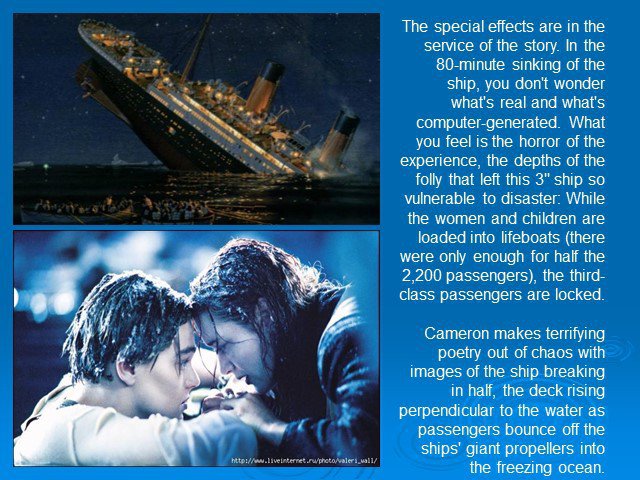 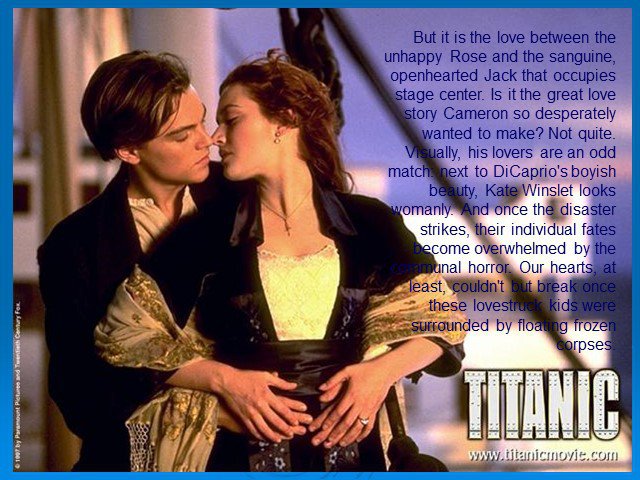 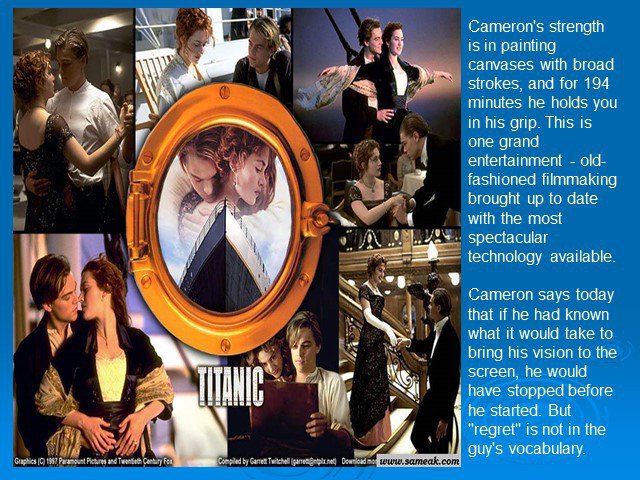 As you know, the 3-hour-14-minute film "Titanic" is no mere disaster movie. It's an epic love story about a 17-year-old American aristocrat who is betrothed to a rich and hateful suitor but falls in love with a free-spirited artist, who won his third-class passage in a card game. It's "Romeo and Juliet" on a sinking ship and has become an international sensation. "Titanic" is also a movie about money and its evils. With fine irony, Cameron has spent more dollars than any other filmmaker to make a film that denounces the rich.

The $8,4 million costume budget alone would finance several independent movies. Production designer Peter Lamont copied the real Titanic down to the exact shade of green on the chairs in the smoking lounge. The sumptuous sets have made-to-order replicas of the china, the stained-glass windows - and since all of it was going to be destroyed, nothing could be rented. "To the best of our knowledge, there was no violation of historical truth", says Cameron. "We have a great responsibility. Whatever we make, will become the truth, the visual reality that a generation will accept", says Cameron.

The special effects are in the service of the story. In the 80-minute sinking of the ship, you don't wonder what's real and what's computer-generated. What you feel is the horror of the experience, the depths of the folly that left this 3" ship so vulnerable to disaster: While the women and children are loaded into lifeboats (there were only enough for half the 2,200 passengers), the third-class passengers are locked. Cameron makes terrifying poetry out of chaos with images of the ship breaking in half, the deck rising perpendicular to the water as passengers bounce off the ships' giant propellers into the freezing ocean.

But it is the love between the unhappy Rose and the sanguine, openhearted Jack that occupies stage center. Is it the great love story Cameron so desperately wanted to make? Not quite. Visually, his lovers are an odd match: next to DiCaprio's boyish beauty, Kate Winslet looks womanly. And once the disaster strikes, their individual fates become overwhelmed by the communal horror. Our hearts, at least, couldn't but break once these lovestruck kids were surrounded by floating frozen corpses.

Cameron's strength is in painting canvases with broad strokes, and for 194 minutes he holds you in his grip. This is one grand entertainment - old-fashioned filmmaking brought up to date with the most spectacular technology available. Cameron says today that if he had known what it would take to bring his vision to the screen, he would have stopped before he started. But "regret" is not in the guy's vocabulary.

What do you know about the usa?

1. Who discovered America? A) Christopher Columbus B) George Washington C) The pilgrims. 2. Who was the first president of the USA? A) Abraham Lincoln ...

What do you know about cinema - что вы знаете о кино

Speaking about the past (поговорим о прошедшем времени)

Speaking about the weather

Pollution in the WORLD. Polution is very important problem in the world. Around us, there is lot’s of rubbish water is unhealthy and air is not clean. ...

The universe is boundless There are countless: Planets, Stars, Galaxies. Movie Awards: Oscar. For best visual effects:. The British Academy. For best ...

About myself (о себе)

Let’s go to London the Houses of Parliament (the Palace of Westminster). It’s the place of the English Government. The Tower of London. It was a castle ...

What is special about your country?

What do you know about cinema?

What Do You Know About the Arctic

What do English-speaking people think about their countries?

What do you know about British traditions

Learning More about Each Other

TALKING ABOUT THE FAMOUS

Learning more about each other

Learning More about Each Other

We are fond of pets