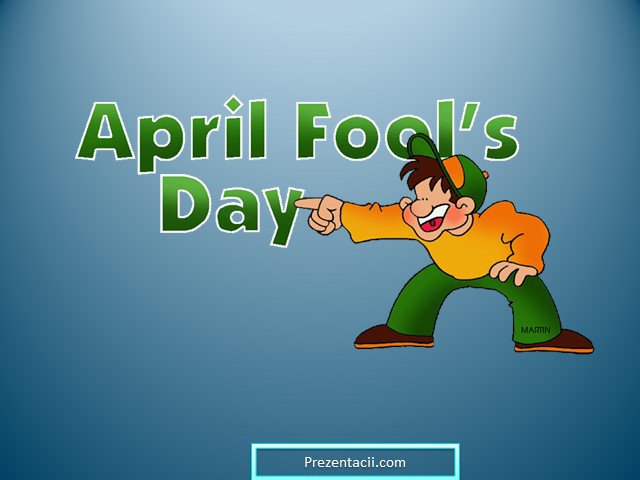 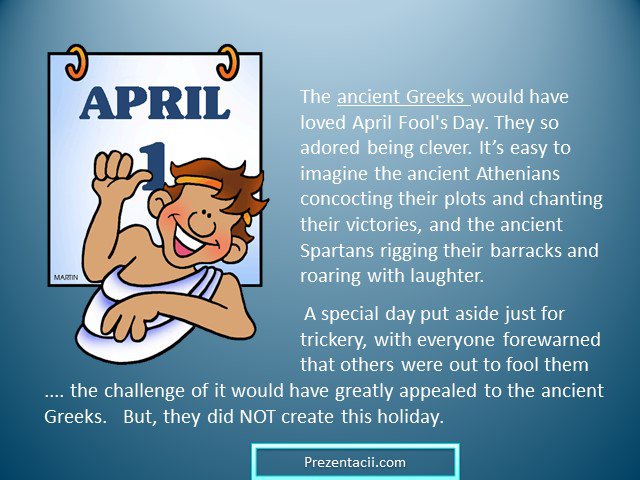 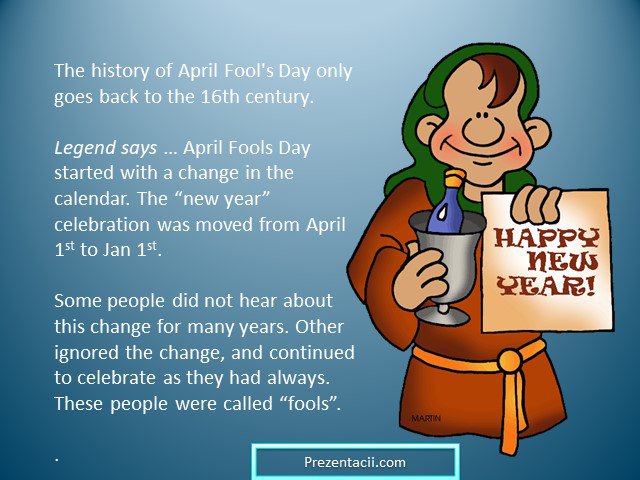 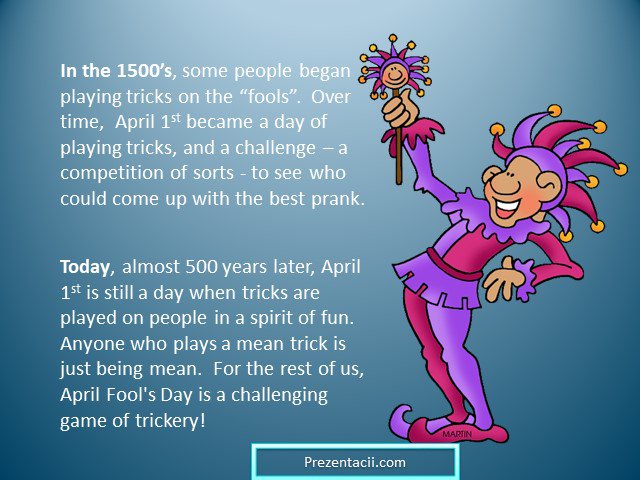 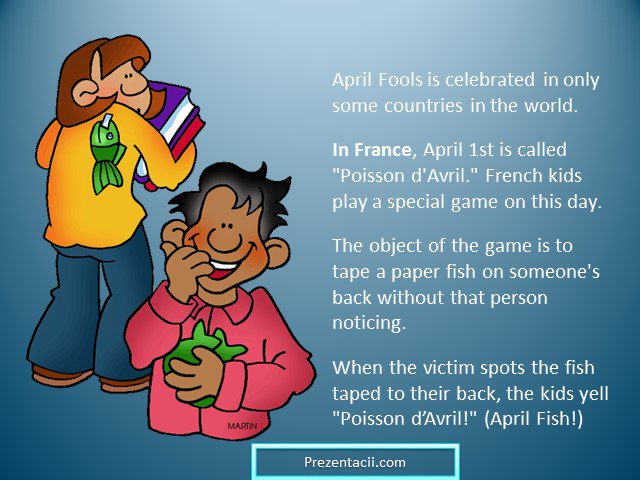 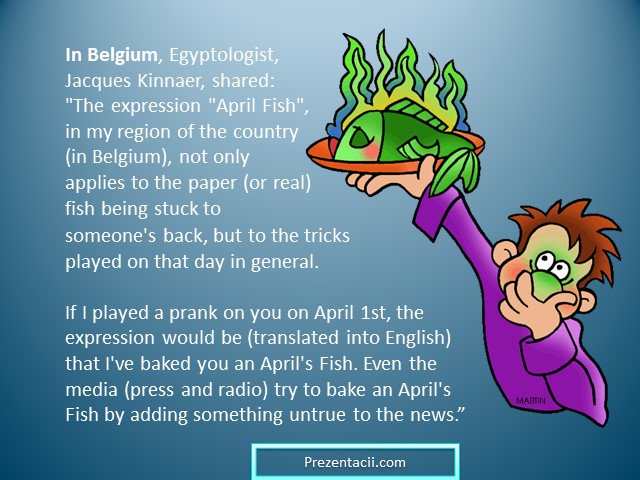 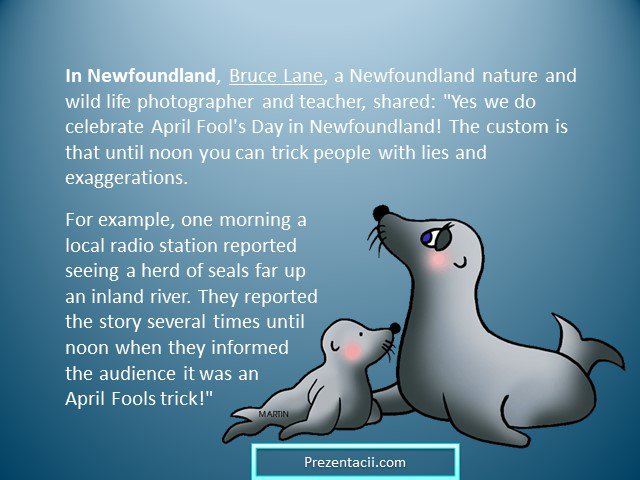 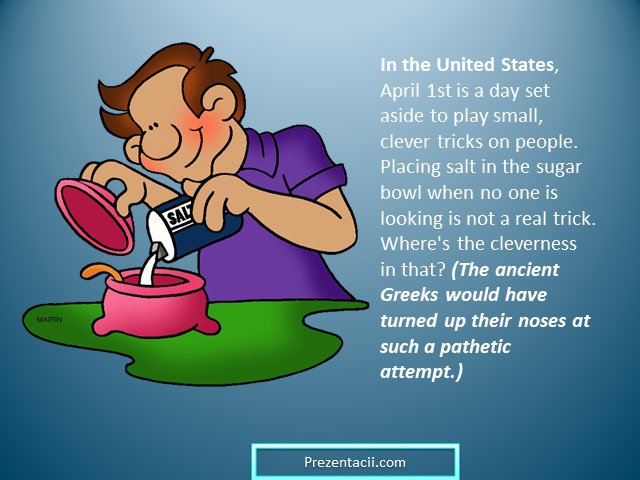 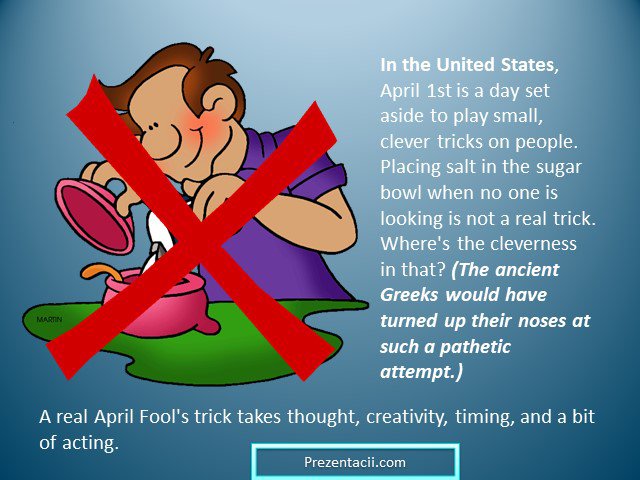 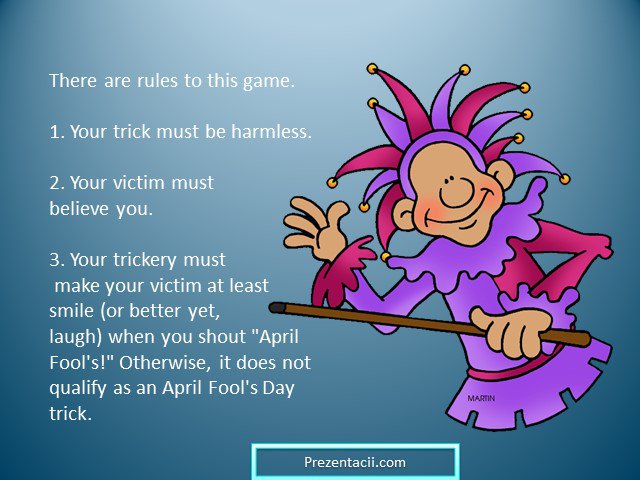 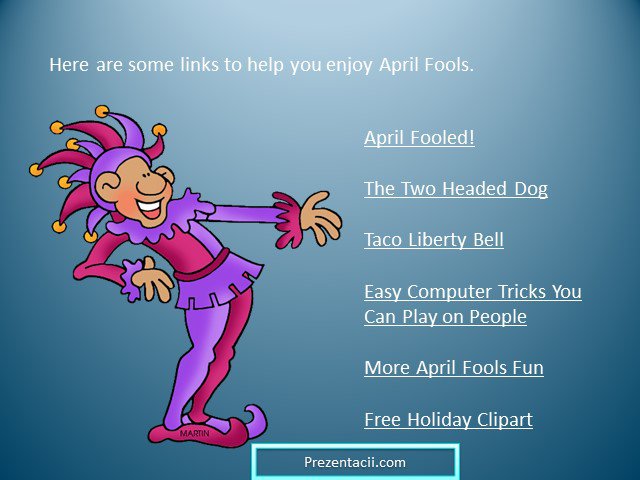 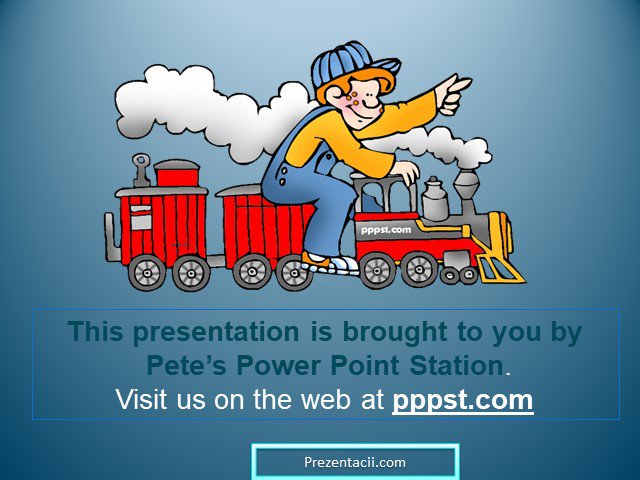 The ancient Greeks would have loved April Fool's Day. They so adored being clever. It’s easy to imagine the ancient Athenians concocting their plots and chanting their victories, and the ancient Spartans rigging their barracks and roaring with laughter.

A special day put aside just for trickery, with everyone forewarned that others were out to fool them

.... the challenge of it would have greatly appealed to the ancient Greeks. But, they did NOT create this holiday.

The history of April Fool's Day only goes back to the 16th century. Legend says … April Fools Day started with a change in the calendar. The “new year” celebration was moved from April 1st to Jan 1st. Some people did not hear about this change for many years. Other ignored the change, and continued to celebrate as they had always. These people were called “fools”. .

In the 1500’s, some people began playing tricks on the “fools”. Over time, April 1st became a day of playing tricks, and a challenge – a competition of sorts - to see who could come up with the best prank.

Today, almost 500 years later, April 1st is still a day when tricks are played on people in a spirit of fun. Anyone who plays a mean trick is just being mean. For the rest of us, April Fool's Day is a challenging game of trickery!

April Fools is celebrated in only some countries in the world. In France, April 1st is called "Poisson d'Avril." French kids play a special game on this day. The object of the game is to tape a paper fish on someone's back without that person noticing. When the victim spots the fish taped to their back, the kids yell "Poisson d’Avril!" (April Fish!)

In Belgium, Egyptologist, Jacques Kinnaer, shared: "The expression "April Fish", in my region of the country (in Belgium), not only applies to the paper (or real) fish being stuck to

someone's back, but to the tricks played on that day in general. If I played a prank on you on April 1st, the expression would be (translated into English) that I've baked you an April's Fish. Even the media (press and radio) try to bake an April's Fish by adding something untrue to the news.”

In Newfoundland, Bruce Lane, a Newfoundland nature and wild life photographer and teacher, shared: "Yes we do celebrate April Fool's Day in Newfoundland! The custom is that until noon you can trick people with lies and exaggerations.

For example, one morning a local radio station reported seeing a herd of seals far up an inland river. They reported the story several times until noon when they informed the audience it was an April Fools trick!"

In the United States, April 1st is a day set aside to play small, clever tricks on people. Placing salt in the sugar bowl when no one is looking is not a real trick. Where's the cleverness in that? (The ancient Greeks would have turned up their noses at such a pathetic attempt.)

There are rules to this game. 1. Your trick must be harmless. 2. Your victim must believe you. 3. Your trickery must make your victim at least smile (or better yet, laugh) when you shout "April Fool's!" Otherwise, it does not qualify as an April Fool's Day trick.

Here are some links to help you enjoy April Fools.

This presentation is brought to you by Pete’s Power Point Station. Visit us on the web at pppst.com

GLAD TO MEET YOU. ST. VALENTINE’S DAY Games and Puzzles. The sky is high, the see is deep. Thinking of you I cannot sleep. If you love me like I love ...

I am red and round, I grow on the tree. All children and adults Adore eating me. Apple Day is an annual celebration, of apples and orchards. It’s ...

Victory Day (9 May). This day celebrates the end of WWII (The Great Patriotic War, as Russians know it), in which Russia lost 27 million people. This ...

Writing effective and heart touching Valentine's Day Love Letters is quite an art in itself. To perfect this art one needs a will to express and lots ...

An Apple a Day Keeps a Doctor Away