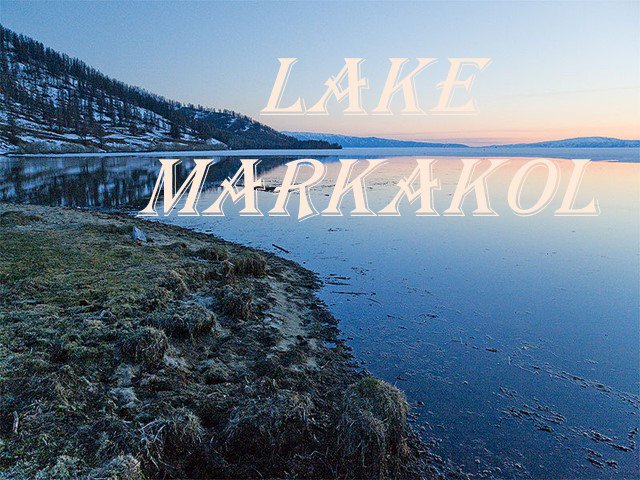 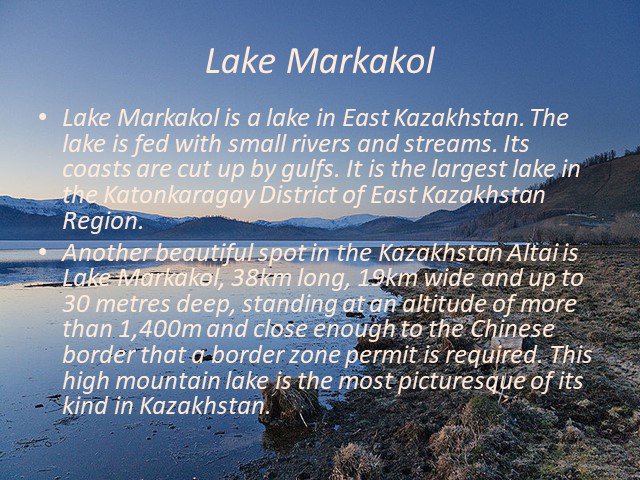 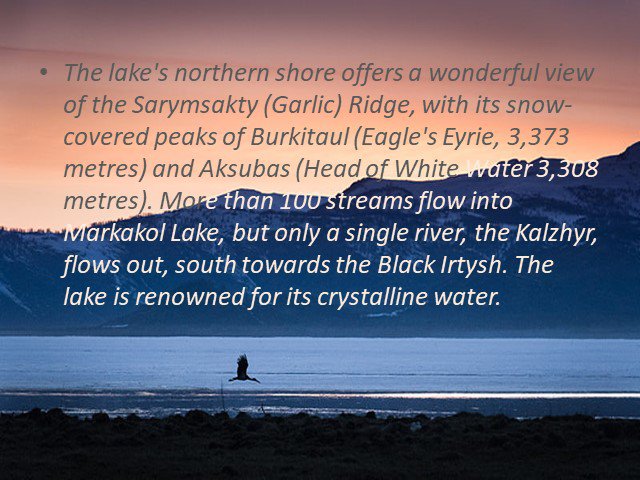 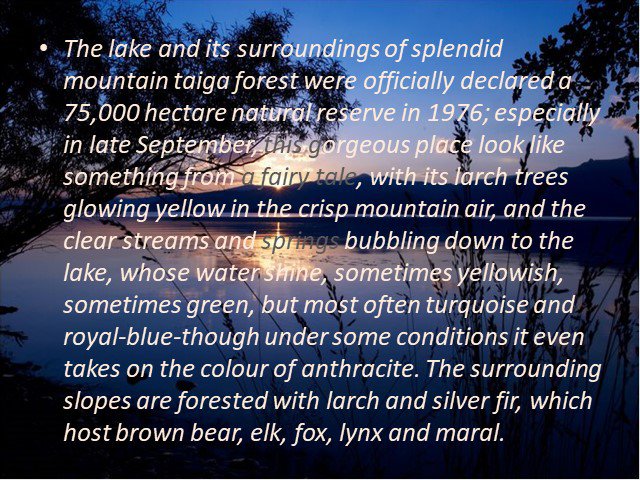 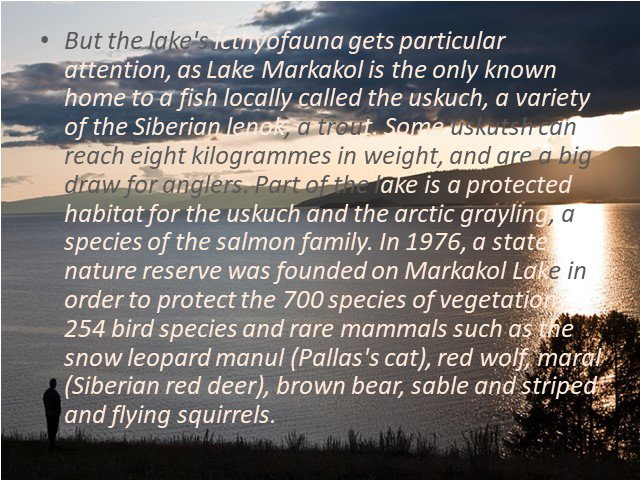 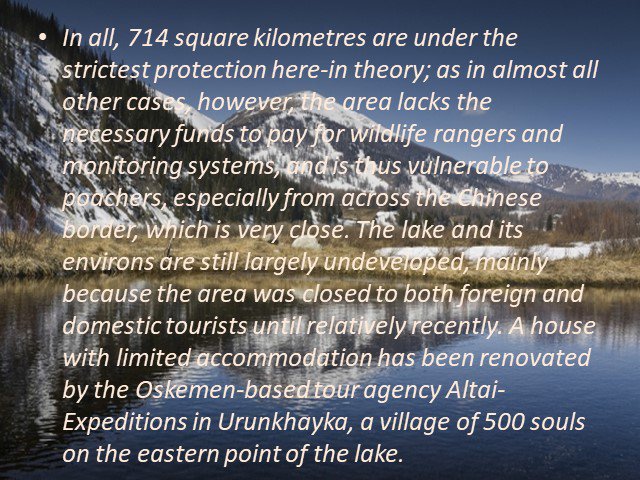 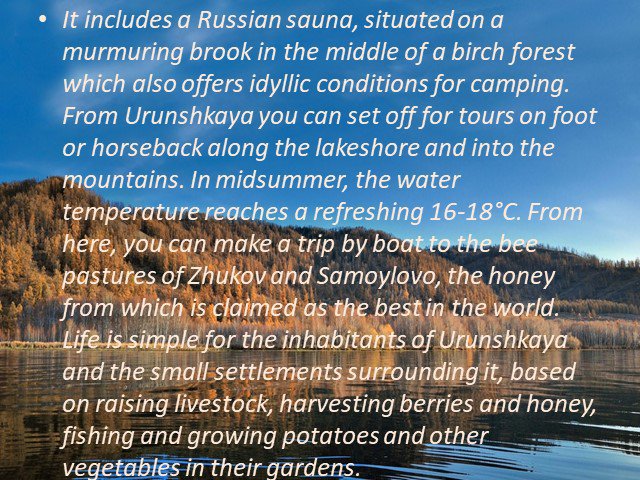 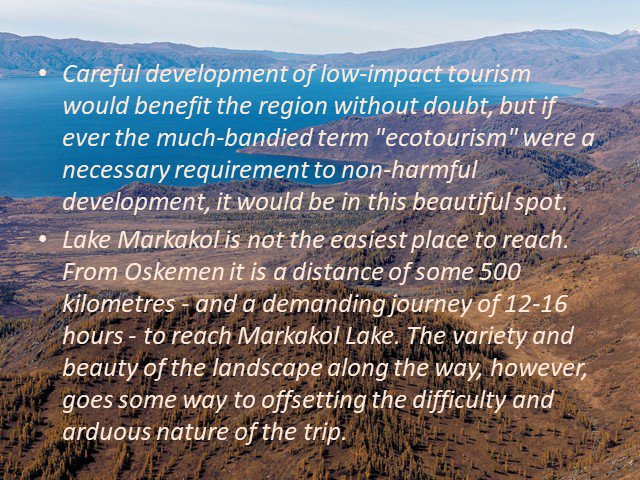 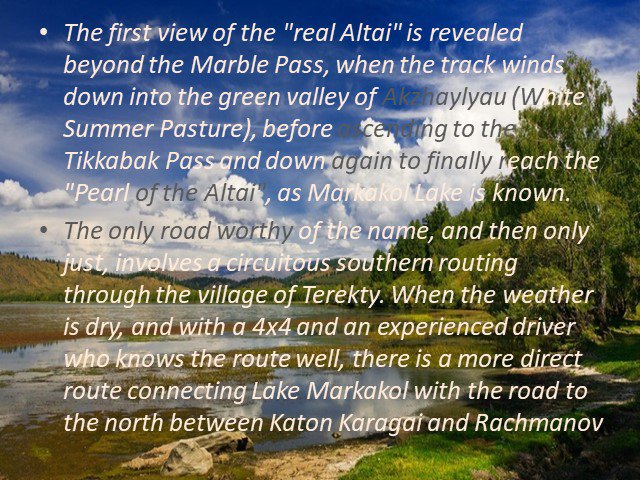 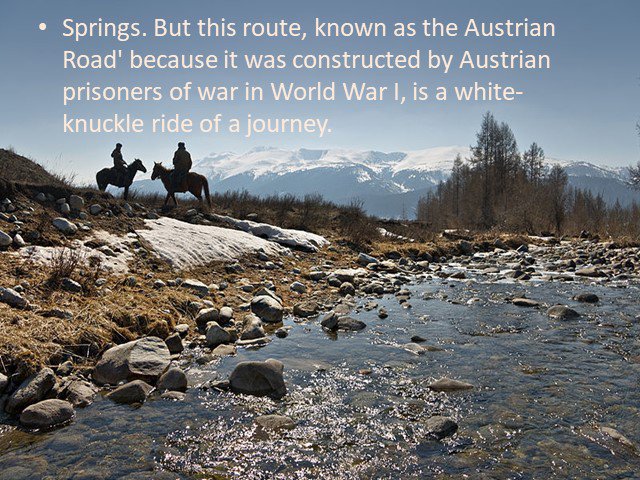 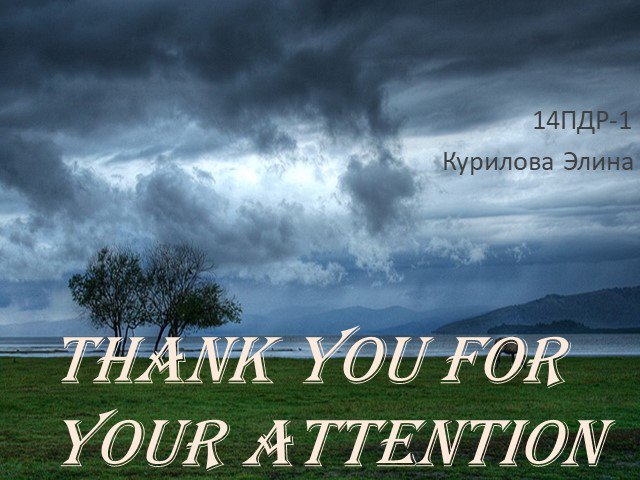 Lake Markakol is a lake in East Kazakhstan. The lake is fed with small rivers and streams. Its coasts are cut up by gulfs. It is the largest lake in the Katonkaragay District of East Kazakhstan Region. Another beautiful spot in the Kazakhstan Altai is Lake Markakol, 38km long, 19km wide and up to 30 metres deep, standing at an altitude of more than 1,400m and close enough to the Chinese border that a border zone permit is required. This high mountain lake is the most picturesque of its kind in Kazakhstan.

The lake's northern shore offers a wonderful view of the Sarymsakty (Garlic) Ridge, with its snow-covered peaks of Burkitaul (Eagle's Eyrie, 3,373 metres) and Aksubas (Head of White Water 3,308 metres). More than 100 streams flow into Markakol Lake, but only a single river, the Kalzhyr, flows out, south towards the Black Irtysh. The lake is renowned for its crystalline water.

The lake and its surroundings of splendid mountain taiga forest were officially declared a 75,000 hectare natural reserve in 1976; especially in late September, this gorgeous place look like something from a fairy tale, with its larch trees glowing yellow in the crisp mountain air, and the clear streams and springs bubbling down to the lake, whose water shine, sometimes yellowish, sometimes green, but most often turquoise and royal-blue-though under some conditions it even takes on the colour of anthracite. The surrounding slopes are forested with larch and silver fir, which host brown bear, elk, fox, lynx and maral.

But the lake's icthyofauna gets particular attention, as Lake Markakol is the only known home to a fish locally called the uskuch, a variety of the Siberian lenok, a trout. Some uskutsh can reach eight kilogrammes in weight, and are a big draw for anglers. Part of the lake is a protected habitat for the uskuch and the arctic grayling, a species of the salmon family. In 1976, a state nature reserve was founded on Markakol Lake in order to protect the 700 species of vegetation, 254 bird species and rare mammals such as the snow leopard manul (Pallas's cat), red wolf, maral (Siberian red deer), brown bear, sable and striped and flying squirrels.

In all, 714 square kilometres are under the strictest protection here-in theory; as in almost all other cases, however, the area lacks the necessary funds to pay for wildlife rangers and monitoring systems, and is thus vulnerable to poachers, especially from across the Chinese border, which is very close. The lake and its environs are still largely undeveloped, mainly because the area was closed to both foreign and domestic tourists until relatively recently. A house with limited accommodation has been renovated by the Oskemen-based tour agency Altai-Expeditions in Urunkhayka, a village of 500 souls on the eastern point of the lake.

It includes a Russian sauna, situated on a murmuring brook in the middle of a birch forest which also offers idyllic conditions for camping. From Urunshkaya you can set off for tours on foot or horseback along the lakeshore and into the mountains. In midsummer, the water temperature reaches a refreshing 16-18°C. From here, you can make a trip by boat to the bee pastures of Zhukov and Samoylovo, the honey from which is claimed as the best in the world. Life is simple for the inhabitants of Urunshkaya and the small settlements surrounding it, based on raising livestock, harvesting berries and honey, fishing and growing potatoes and other vegetables in their gardens.

Careful development of low-impact tourism would benefit the region without doubt, but if ever the much-bandied term "ecotourism" were a necessary requirement to non-harmful development, it would be in this beautiful spot. Lake Markakol is not the easiest place to reach. From Oskemen it is a distance of some 500 kilometres - and a demanding journey of 12-16 hours - to reach Markakol Lake. The variety and beauty of the landscape along the way, however, goes some way to offsetting the difficulty and arduous nature of the trip.

The first view of the "real Altai" is revealed beyond the Marble Pass, when the track winds down into the green valley of Akzhaylyau (White Summer Pasture), before ascending to the Tikkabak Pass and down again to finally reach the "Pearl of the Altai", as Markakol Lake is known. The only road worthy of the name, and then only just, involves a circuitous southern routing through the village of Terekty. When the weather is dry, and with a 4x4 and an experienced driver who knows the route well, there is a more direct route connecting Lake Markakol with the road to the north between Katon Karagai and Rachmanov

Springs. But this route, known as the Austrian Road' because it was constructed by Austrian prisoners of war in World War I, is a white-knuckle ride of a journey.